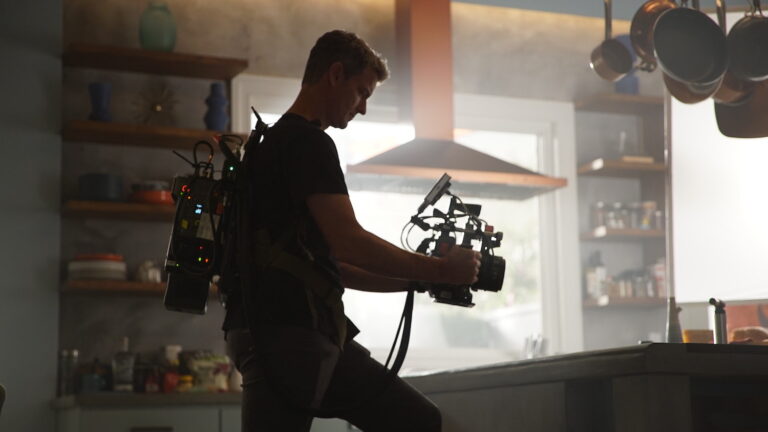 It took five full days to prepare the final fight scene of The Hunt. Five days of mapping it out, making sure that the blocking and choreography worked. Five days of going over it with actors and stunt people to make sure everybody could safely perform.

And at the tail end, John “Buzz” Moyer and his camera crew arrived to capture those five days of work on film.

This weekend, The Society of Camera Operators will be holding their annual Camera Operator of the Year awards. Among the nominees is Moyer, for his work on the controversial survival horror satire.

The 2020 film was produced by Blumhouse Productions on a budget of $14 million. As Moyer noted, a more expensive movie would typically have every shot firmly set in stone before the camera operator even stepped foot on set. However, The Hunt having a smaller budget allowed him to add a few touches of his own while filming.

Moyer recounted a scene where the character of Crystal, played by Betty Gilpin, goes to open a truck door, but notices the wire of a rigged explosive. The shot was originally a simple low angle, looking up at Gilpin.

Instead, at Moyer’s suggestion, the camera crew used a skater scope— a long lens with flexible joints—which can be twisted during a shot. In this case, it was used to closely follow the wire from the handle to the bomb underneath the truck, ratcheting up the tenson of the scene.

“My go-to thing was ‘this is a good shot, but if you gave us five minutes, it could be a great shot,’” said Moyer.

While the film has a lot of scenes that take place in open spaces, there are also points where the action occurs in much smaller, more claustrophobic spaces.

The opening scene, for example, takes place on a jet. While the set was a bit wider than a real one, Moyer still had to use some tricks to pull-off shots that otherwise would not be possible in such a tight spot. Luckily, the windows were removable, allowing the camera to be set up outside the jet, and he even got some more use out of the skater scope.

Sometimes, in settings like this, actors have to conform to the camera. For example, in the very first shot of the film, the stewardess had to bend over a bit more than would be natural when speaking to the actor opposite her, so that she would be properly framed. In other instances, an actor might have to do a lot of moving or contorting for the camera operator to get an otherwise impossible shot.

“When those challenges come in, it almost exponentially increases the adrenaline and the wanting for it to work. When it’s finally done and it all works everyone goes ‘Yeah, that was great!’ That’s what makes the day, those moments like that,” said Moyer.

Moyer’s credits are extensive and include everything from Dogma to The Avengers. It isn’t lost on him that every set he has been on has been an opportunity to hone his craft. His depth of experience, which dates back to the 1970s and includes TV and film, documentary, drama and action, and work with directors as high profile as Steven Spielberg, is the reason he sometimes has a little more influence on a job.

To be nominated for Camera Operator of the Year is to be recognized by his peers for the skill that goes into just one shoot. And for Moyer, it’s the culmination of all of his work so far.

“It’s humbling, you get to look back at your career and say ‘all I’ve done in these 32 years of doing this has allowed me to get to this point.’ It’s definitely nice to be recognized, for sure,” said Moyer.

The Camera Operator of the Year Awards and Creative Vision Celebration will be held on Sunday, April 11.