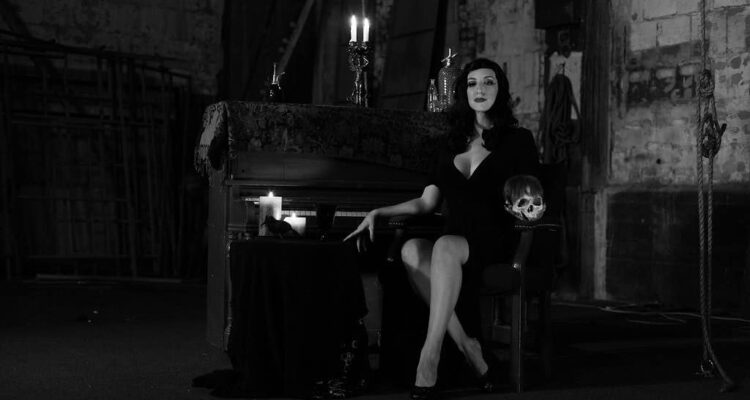 Fans of The Maverick Theater’s annual stage production of Night of the Living Dead might recognize her as the bendy zombie — the one that looks like her arm is at an impossible angle over her head.

Other horror fans might have spotted her in another horror-themed production, attraction or event — from Vampira of Plan 9 from Outer Space to a variety of other ghoulish characters.

Theatrical performer and producer Ingrid Garner loves all things horror, and she shares her passion through all sorts of outlets. Here’s what she has to say about her love of the macabre:

Halloween Every Night: How did your love of horror start?

Ingrid Garner: I’ve always been a morbidly curious sort, but despite my dark sensibilities, I grew up terrified of anything horror related. I couldn’t even bring myself to ride Haunted Mansion at Disneyland until I was 15 years old. I had a magical childhood, free from trauma, but I was a deeply anxious kid suffering with a nightmare disorder. I had a rich imagination and it tormented me with gruesome thoughts and dreams at night: images of ghouls breaking into my basement room and disemboweling me. However, in the frightening moments before I fell asleep, I found comfort in envisioning how I could be scarier than any creature that crawled through my window. I would think about how to growl, and twist, and jerk in a way that would strike fear into my foes.

In my early 20s, I started to brave the horror genre bit by bit. I would read the synopsis of a classic film like Halloween or The Exorcist, and then give it a watch, secure in the fact that there would be no surprises. By the time my mom casually informed me she was friends with a couple of the folks from Texas Chainsaw Massacre, I think I was hooked.

HEN: How have you immersed yourself in the horror community/world?

IG: When I was 19, I was cast as a zombie in the  Maverick Theater’s adaptation of Night of the Living Dead. I had seen it the year before and at the time it was the most thrilling and terrifying thing I’d ever experienced. I saw an opportunity to empower my frightened inner child and give her the chance to be scarier than anything she’d ever encountered.

Since then I’ve gotten to visit, design and perform in all manner of horror events around the world, one of my favorites of which has been terrorizing influencers in a 3D maze for YouTube’s Halloween party with legendary scare-actor Shar Mayer.

HEN: How has your work involved horror/Halloween?

IG: Throughout my career, I’ve designed haunted houses, delighted in being a scream queen, and put up some stellar yard haunts. Primarily though, I’m a theater maker, and about half the year I create and produce shows that tour the International Fringe theater circuit. While I am best known for a stage adaptation of my grandmother’s memoir, detailing her youth as an American caught in Nazi Berlin — a different kind of horror — I write plays in a variety of genres. I find horror to be the most fun, though. I toured a show called B-Movie Bash, which honored my favorite kind of films — bad horror. I hosted screenings of the most bizarre shlock in the public domain and I invited comedian friends to come roast them live in front of an audience. Actually, I’m thrilled to be working on a new production that pays tribute to the woman who originated the concept of bashing B-movies. It’s a biographical show about the very first horror hostess and goth/punk icon, Vampira.

HEN: What do you love about horror?

IG: I think horror is the most inventive of genres. I love that the history of horror is the history of industrious filmmakers with little resources producing movies that provoke big reactions. It’s also a valuable genre. Horror has served as a time capsule of human fears and anxieties, decade to decade. Jump scares provide release for stressed brains. Horror-comedy allows us to laugh at our fears. And particularly in recent years, horror has become an effective tool in highlighting social issues, and stirring up discussions about change. I just adore the inherent creativity of horror.

HEN: Do you ever feel like people think you’re weird for being a woman who loves horror?

IG: My family has always been a bit unnerved by my macabre predilections, but I try to explain to them that diving into horror and getting to play the monster has brought me tremendous community, catharsis and empowerment.

HEN: Are there any challenges you’ve had to overcome being a woman working in the horror world?

IG: It seems that playing inhuman characters can inspire inhuman treatment at times. I’ve been astonished by how emboldened some men are to verbally harass and lay hands on female scare-actors.

HEN: What women in horror inspire you?

IG: I of course have to pay immense respect to our Grandma Vampira, who carved out space for us misfits in society, entertainment and fashion at enormous personal cost. Vampira was deeply subversive, funny and fascinating. She combined sex, horror and comedy in a way that satirized 1950s society, and spoke to its stifled subconscious. I’m eternally in awe of her and I hope to return a much deserved spotlight to this icon in my next show.

Beyond that, I tip my hat to all female-identifying horror creators. The more we slither into the industry and produce content from our perspective, which the genre has been desperately lacking, the more incredible, innovative, brilliant ideas come to life and it’s a total thrill. I want more!

HEN: As a performer, how has the pandemic impacted your work and how have you overcome the challenges?

IG: The day I got back from my last tour, California lockdown began. My entire summer tour had to be canceled and deferred to 2021, and it’s likely that I’ll have to defer again this year. Currently, I have no foreseeable entertainment work until mid-2022, but depending on how the vaccine rollout goes, maybe some shows can be salvaged towards the end of the year. However, what has brought me immense solace throughout my loss of income and increasing mortal anxiety, is throwing myself into public service jobs. I was a poll worker during the 2020 election, and am now helping with vaccine distribution. Putting my energy and efforts towards a solution makes me feel closer than ever to being back on stage.