Halloween Is Over, Time To Celebrate Dia de los Muertos 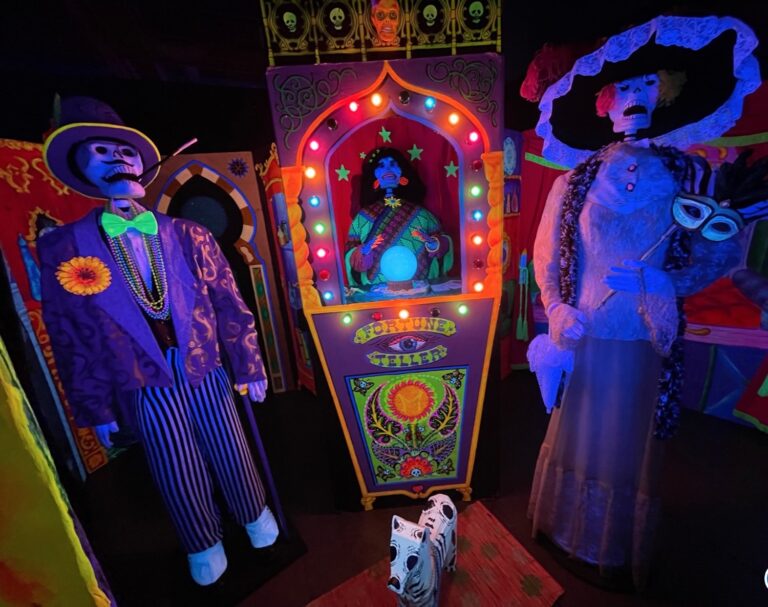 Sugar skulls are the things most people associate with Dia de los Muertos. That’s also about as much as most Americans actually know about the Mexican holiday that just happens to follow Halloween.

Of course, most folks probably don’t know that, either.

Halloween Every Night wanted to set a few things straight on the subject, so we chatted with artist George Newnam, who created the pop-up traveling exhibit Casa Calaveras in 1999. It’s a collection of colorful Dia de los Muertos art and story intended to engage as well as educate.

The exhibit can often be seen at events like Midsummer Scream and readers can next find it on view at December’s Season’s Screamings.

Halloween Every Night: What is the first thing you’d want people to know about Día de los Muertos?
George Newnam: The main thing people should know is that it’s not a Mexican Halloween.
Even though it does share images of death, it’s a completely different holiday. Halloween is about scaring away the evil spirits — children in costumes — by giving them an offering of candy.  Día de los Muertos is the opposite. The spirits of loved ones are welcomed into the house to enjoy the offerings of food on the family altar.
HEN: How does it differ from the older Catholic tradition of All Saints Day or All Souls Day?
GN: Día de los Muertos originally took place in August in the Aztec tradition, but the Spanish missionaries moved the holiday to their All Saints Day and All Souls Day as a part of the colonization. As centuries went by, the holidays have fused as one, with the older traditions being more solemn in tone, involving going to church for prayer and remembrance, as well as the more celebratory elements from the indigenous traditions.
I’m not a Día de los Muertos scholar, but it seems to me most of the traditions are of indigenous origin with perhaps a little Spanish influence.
HEN: How does celebration here in the U.S. compare to the celebration of it in Mexico?
GN: Like most holidays here, Día de los Muertos in the U.S. has now become very commercialized. You see it practically on every product imaginable. Halloween costumes are sold with colorful Día de los Muertos designs. Even the big box stores have special aisles dedicated to the holiday with everything mass produced and made in China. But even with all of this going on, a lot of people still build altars at home and visit local events in their community. In Mexico, all the decorations for the home altars are hand-made by local artisans. In some communities, families gather at the local cemetery for a big party that can go on all night.
HEN: How did your walk-through experience come about and how do you hope people feel about it when they go though?
GN: I used to do a mini-maze haunted house in my garage on Halloween night until, in 1999, my Mexican grandmother bought me a book on Día de los Muertos. I was so fascinated by all the imagery, I started collecting small Día de los Muertos clay skeleton figurines from Mexico. Then I decided to turn my haunted house into a Día de Los Muertos display featuring life-sized skeleton figures. My Chiapas-born mother is also an artist. We worked together, along with a family friend, to fabricate all the papier-mâché skeleton figures with costumes hand sewn by my mom and some collected from thrift shops.  Also I enlisted the help from a couple of artist friends to design and paint all the set pieces. With each passing year, the display has grown larger and more intricate.
It’s always my goal to have our guests totally immersed in the magical world we created, as well as learning a thing or two about this holiday. And we are always looking for people who can provide us a venue to exhibit.
HEN: What are some suggestions for people who’d like to participate and experience Día de los Muertos better?
GN: The first thing I’d recommend is to build a home altar for a departed love one. It is a special tribute and will keep their memory alive. Also find out what events are going on in your community and plan on attending them.
The (colorful, happy and not so very) Gory Details:
Casa Calaveras Holiday Fiesta
Dec. 2-4, 2022
Hall of Yuletide Spirits
Season’s Screamings
Pasadena Convention Center
300 E. Green St.,
Pasadena, Calif. 91101
Tickets are $33-$94.50
1