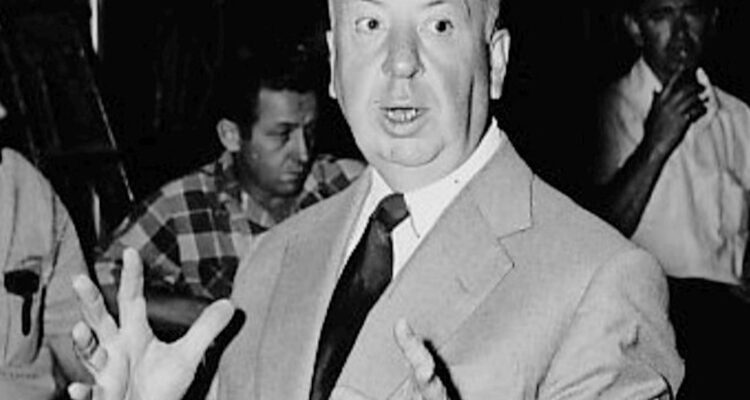 Director Alfred Hitchcock (1899-1980) remains the most influential filmmaker in cinema history 120 years after his birth.

With over fifty films to his credit, myriad technical innovations, and a profound influence on generations of filmmakers to come, Alfred Hitchcock’s indelible legacy lives on today in what would have been the year of his 120th birthday.

While the casual horror fan has seen his popular works, such as Vertigo and Psycho, his impact on not only the genre but the film industry as a whole stretch beyond these two films.

Spending six decades in the film industry, the perennial “Master of Suspense” came to prominence for his unique approach to filmmaking, which would itself inspire the term “Hitchcockian.” Employing a number of camera and editing techniques, such as the dolly zoom and point-of-view shot or quickly cross-cutting shots or allowing a shot to hold for several seconds to ramp up tension, Hitchcock’s style served to evoke suspense from the audience and emotion from his characters, adding to the depth and subsequent success of his films.

It was artistic intent to place the camera in any place it needed to be to tell the story in such visual ways that dialogue was secondary. Often unnecessary. Several of the most famous movie sequences were in Hitchcock films, and involved little or no dialogue.

Beyond his innovative camera work, Hitchcock is also notable for his working relationship with actors, famously revealing during a 1972 interview on the Dick Cavett Show, “all actors should be treated like cattle.” This tongue-in-cheek remark reflected his use of actors as a means to fulfill his artistic vision, requiring less of their input on script and more on their performances. Despite the public criticism over his remarks, actors worked with consummate professionalism to deliver striking performances.

After working on several silent films during the early 1920s, Hitchcock directed his first sound feature film Blackmail. The film is notable for employing what would be two of Hitchcock’s signature techniques: close-ups and cameos.

Blackmail follows the accounts of two lovers who are on the opposite sides of the law. Detective Frank is seeking justice for the murder of Mr. Crewe, an artist who was last seen with Frank’s girlfriend Alice. After almost getting raped, Alice kills Mr. Crewe in self-defense by stabbing him to death.

What truly makes this film standout is Hitchcock’s proclivity for close-ups interspersed with repeated dialogue, especially the knife scene in which Alice is sitting down for a meal as an older woman is speaking about the murder. Beginning as a normal conversation, the close-up of Alice’s worsening facial expression interplays with that of the repeated use of the word knife, furthering her guilt.

This film is also notable for ushering in one of Hitchcock’s many cameos. Throughout his film career he would find his way into his films at some point or another, with his cameo in Blackmail logging in at 10 minutes.

With a string of many hits throughout the 1930s, Hitchcock’s star grew and his efforts would take another leap forward with his spy film Notorious. The film features Cary Grant, Ingrid Berman, and Claude Rains in a story involving government agents, espionage, and a love triangle. Notorious brings to life Hitchcock’s many talents, including his uncanny ability to build tension and suspense by revealing snippets of truth to the audience that the characters know nothing about. In one notable scene, Alicia is hosting a lavish party with a stolen key ring in her hand. Hitchcock uses a crane to cross a busy room, slowly zeroing in on the key in Alicia’s hand. It reveals Hitchcock’s affinity for picture over dialogue.

Based on the novel of the same name, Strangers on a Train depicts the tension between a love-tied tennis player, Guy Haines (Farley Granger), and a psychopath, Bruno Anthony (Robert Walker), slowly boiling over. What at first seems like a hypothetical murder plot discussed between two strangers quickly evolves into Guy fighting for his life and innocence from the nefarious Bruno. Showcasing the duality of light and dark, Hitchcock once again tells a story focused more on what the audience sees as opposed to the dialogue.

As Hitchcock’s success continued, and the re-release of his films in theaters as well as their broadcast on TV stations around the country    would allow his films to be rediscovered by a new generation, his influence resounded with younger filmmakers worldwide. Director Brian de Palma has referenced Hitchcock as a main source of inspiration and paid homage to him in several films, notably in Dressed to Kill. One explicit reference to Psycho is seen when housewife Kate Miller (Angie Dickinson) is hacked to death by the blonde killer. With the killer awaiting Kate outside the elevator doors before murdering her, the scene is reminiscent of the famous shower scene, with the scene’s score strikingly similar to that of Hitchcock’s film.

In addition to De Palma, comedian and filmmaker Mel Brooks lauds Hitchcock’s work, admitting in an interview with Joy Behar, “that he was the best film director that ever lived.” In High Anxiety, Brooks plays Dr. Thorndyke, a nervous wreck of a man who encounters strange occurrences at the Psycho-Neurotic Institute for the Very, Very Nervous. Each of these situations play off famous works of Hitchcock. As in Thorndyke’s fear of heights, fleeing the droppings of raucous birds at a local park, Brooks’ own take on the shower scene or fearing the frantic woman seemingly charging at him at the airport. This satirical homage to Hitchcock was a commercial success, with the master of suspense showing high praise for Brooks by sending him a gift package denoting, “a small token of my pleasure, have no anxiety about this.”

Although it has been 43 years since Hithcock’s last film, his contributions continue to influence filmmakers of today.

Eight Hitchcock films have been selected for preservation in the Library of Congress’ National Film Registry, among other similar distinctions. Pundits and industry peers regard him as one of the greatest directors of all time, with IMDb ranking Hitchcock at #3 on their list of Top 25 Greatest Directors of all Time. More than a century after his birth and 40 years after his death, Hitchcock, lives on as one of the most impactful and influential minds of the 20th century.