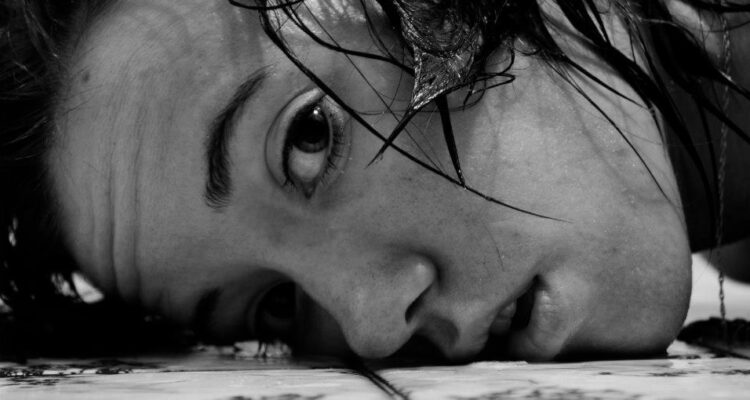 Self portrait as Marion Crane in 2010

She was about 9 when she saw her first real horror movie. She snuck into her parents’ room and hid under the bed while they watched “Sleepy Hollow.”

Rhoades’ love of horror continued on — and even involved working behind-the-scenes for The Queen Mary’s Dark Harbor — and now she runs her own escape room business with her husband, Luke.

Rhoades took some time from her busy schedule of creating mind-bending game puzzles to answer some of our questions about her passion for horror and owning her own horror-themed business.

Halloween Every Night: How have you immersed yourself in the horror community/world?

Madison Rhoades: Besides working in horror, I try to go to as many haunts or immersive theater experiences I can. I love seeing what other people are doing and what new ideas are being created. I also attend a lot of horror conventions like Midsummer Scream, TransWorld, HauntCon, etc. During college I was gifted a book titled 101 Horror Movies You Have to Watch Before You Die. So I worked on watching every one of those films — which took a few years. Once I was done, I disagreed with a lot of their choices, so now I am working on my own list of 101 must-watch horror films.

HEN: How did you end up working in horror?

MR: Right out of college, got an amazing job as the lead scenic painter for The Queen Mary’s Dark Harbor. I got to paint scary sets while on a real haunted ship. It was a dream job. After doing that for three years, I opened Cross Roads Escape Games with my husband in 2016. Our first game was The Hex Room, where players are cast as cliche horror movie stereotype characters and have to survive a real-life horror film. From watching so many horror films, a question I always asked myself was ”If I was in that situation, what would I do?” So I wanted to make that a question anyone could answer but putting themself to the test in real life. The game has received a lot of awards and praise, and we just keep adding to it every year, making it better and scarier.

At the end of 2018, we opened The Psych Ward, which is a real-life social deduction game of strategy, trust and betrayal. It’s not scary, but takes place in a spooky 1970s psychiatric hospital.

In 2019, I combined all my passions — escape rooms, haunts and theater — and wrote, directed and designed the immersive theater experience, The Seance. The show had a limited run, but we hope to bring it back bigger and better in the coming years at a historical location.

HEN: What do you love about horror?

MR: There is something about the macabre that I have always been drawn to. In my opinion, horror is one of the hardest mediums to portray and when someone gets it right, it can be beautiful. Horror is also a territory that will always grow and change. There are so many interpretations of what is “scary” that will always keep the medium endless.

HEN: Do you ever feel like people think you’re weird for being a woman who loves horror?

MR: I would say my husband’s family definitely thought I was weird, and probably still do, for liking horror. Thankfully, they quickly became very accepting of my hobby. I don’t receive many negative comments for my unique taste. I guess that is because I surround myself with very open-minded people. One time in high school a guy who liked me heard I liked horror movies so he took me on a date to see Saw III in theaters. About 10 minutes into the movie, he turned to me, disgusted, and asks, “You actually like this stuff?!” [To] which I replied, “Uh, yeah.” That was our first and last date.

HEN: Are there any challenges you’ve had to overcome being a woman working in horror?

MR: I don’t want to call anyone out, but there have been a few horror-related jobs I have applied for that would not even look at my application because I was a woman and the department I was applying for apparently was a “boys club.” I think that is more just the usual struggle of being a working woman, not necessarily related to the horror field. Most people in the horror world are very welcoming, but it is still an uphill climb for women to be taken as seriously in most fields. One challenge I overcame, with the help of my husband, was opening our escape room. The city was not welcoming to a woman-owned business and my husband saw the difference in how I was being treated compared to him. I don’t think I would have been able to do it without him.

HEN: What women in horror inspire you?

MR: I draw a lot of inspiration from the character and stories of the Greek goddess Hecate. I really love the artwork by Michelle Prebich, who I met at a local horror convention. Her artwork is both spooky and fun — my favorite combo. The Babadook is one of my favorite films, written and directed by Jennifer Kent.

HEN: How has Cross Roads been impacted by the pandemic and how have you overcome the challenges?

MR: Sadly, the effects of pandemic has hit us pretty hard. We were closed for a few months and when we reopened we were at limited capacity. Thankfully we have been able to be open, and the business we have had is keeping us alive. We put safety protocols in order: mask wearing, disinfecting, limited number of groups, etc. We also had to get creative with some of our costume pieces and have either changed them into a prop that is carried and easy to disinfect instead of worn, or like in The Psych Ward, we changed the patient gowns to stickers that players place on their chest.

The biggest problem was we were unable to grow in 2020. We try to put out a new experience every year, and we were not able to do that last year. We had big plans to revamp our Hex Room game, and rehome The Seance and make it bigger and better. Both of those projects have been put on hold for the time being. The pandemic has definitely been a challenge to overcome, but we are happy to be able to provide a safe form of entertainment since there are so few that can be open right now.