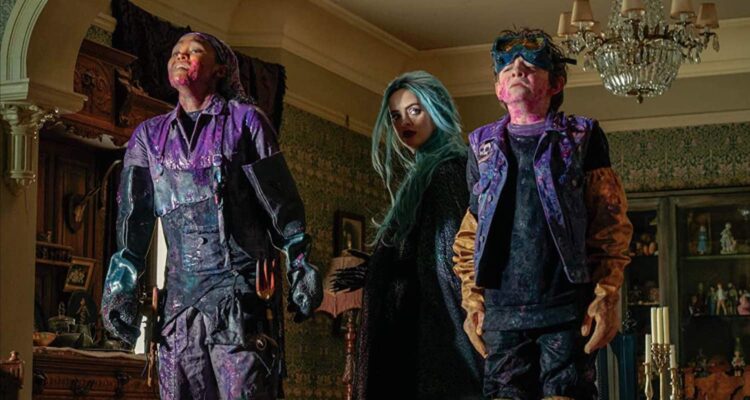 Imagination keeps you alive. And it makes your life worth living. Especially if you’re a kid.

The kids in a Brooklyn apartment building get a literal lesson in this in the new Netflix horror fantasy Nightbooks.

Based on the children’s book by J.A. White, it’s a dark, but still family-friendly parable about the importance of creativity. Krysten Ritter plays Natacha, a witch that captures and forces young Alex to write and read her new scary stories nightly or she’ll kill him. Yazmin, who was captured years earlier, is his only help.

There are darkly scary and colorfully goofy moments of adventure for lead actors Winslow Fegley who plays Alex, and Lidya Jewett, who plays Yazmin. But what, exactly, is horror movie makeup like for kids in a film like this?

“Normally, most kids are camera ready,” says Leslie Sebert, veteran make up artist and department head for Nightbooks. Kids, after all, don’t have the wrinkles, marks, scars, double chins, liver spots or contractual demands of older actors. So makeup for kids, even in a horror film, is almost non-existent, Sebert says, and occasionally little more than corrective.

But this was a new challenge. And Sebert got to use her imagination as well.

“For Nightbooks, when I read the script I thought ‘it will be straightforward,’” she says, but after talking with director David Yarovesky, she found out he wanted the fantastical elements of the story to have a more distinct look. That gave Sebert the chance to experiment.

“I was a chemist trying to figure out what to use for color and continuity,” she says.  But the other challenge, even when she found the right color, texture or look at home, “you have to recreate these looks,” she says. “It was a lot of testing and what had the best durability. The makeup had to be placed on them every day and during the day, I must have tested 10 -15 types of things together.”

Different scenes in the film (no spoilers) required colorful, but contrasting looks. At one point, the kids enter a candied cottage in a forest, where things are more pastel and almost psychedelic.

“Our director had a real particular way he wanted the candy vomit to look.” Sebert says. “It doesn’t exist, so you have to make it.”

Making it is one thing, of course. Wearing it is another. Sebert has nothing but praise for Fegley and Jewett who were professional as well as good sports.

“They were wonderful. They were the best kids,” she says. “When it got to them being covered in vomit and goo, they were great about it.”

The other kids who appear in Alex’s stories had a very different look.

“They were almost black and white and very unique,” she says. “Black and white with a red tinge and that was fun because it created its own drama.”

Finally, Natacha’s back story had to give Ritter a clear look of her own.

“There were different thought processes,” Sebert says. “But she was taken as a child, so it was this great child-like evil girl, and glitter just seemed like so much fun. … What kid doesn’t like glitter?

“I guess you’ll always have your slasher movies,” Sebert says, “but what’s super fun about Nightbooks, to shoot a horror movie without blood is so different.”

Sebert has a point. Glitter and candy vomit offer something new to the imagination. And imagination is everything.