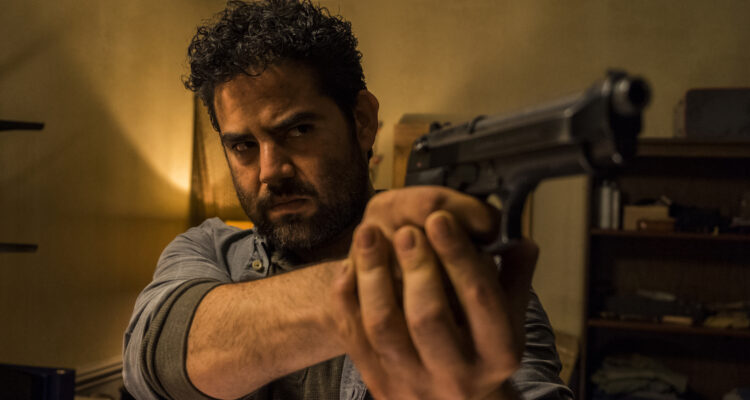 Juan Gabriel Pareja made his surprising return as Morales in episode three of this season's "The Walking Dead." He says he was as surprised about it as we were. Photo: Gene Page/AMC

The Walking Dead’s current eighth season of “All Out War” will return from its holiday breather on Sunday, but one of the most notable moments of the first half so far included a surprise cameo from first season character Morales, played by Juan Gabriel Pareja.

A turn that was both a refreshing callback to the show’s beginnings and disappointingly short. Pareja’s performance conveying a hell of a backstory without actually telling one, reminded viewers of how far Rick – and everyone else – has come over eight years.

Pareja recently spoke with Halloween Every Night about the all-too-brief return to the show and about his journey through the zombie apocalypse.

Halloween Every Night: Describe for me what it was like getting that callback from the producers of The Walking Dead.

Juan G. Pareja: It was pretty awesome, I’m not gonna lie. I was in the middle of an audition. I got a call and listened to my voicemail. They were fishing to see how available I was going to be.

They were very non-committal, like, “maybe we’ll give you a call in a couple of months.” But I was kind of kept in the dark until they said the dates and production window. It ended up being a couple of days work.

It took a moment of adjustment once I got the script, because I was definitely Team Rick. It was a blow to the gut for what I expected, but I was grateful to come back.

HEN: When you were in production for the first season of the show, it seems like it could have been an actors’ summer camp. You’re out in the woods, it’s hot, and though a few of the actors had some recognition, no one was really a star. And the thing you’re working on is clearly good, but seems like a long shot. What was the experience actually like?

JGP: It was kind of [a] camp thing, yeah. There was a heatwave in Atlanta that became kind of a character, too. There was a buzz in the air to be working with Greg Nicotero and Gale Anne Hurd. But there was no way we could have anticipated the success.

Andy set a tone that he’s managed to maintain over the years. It was very welcoming in the beginning and it was the same when I returned. Just as friendly and warm.

HEN: Morales is not a character from the early comics, so how much backstory did you put into Morales and how much were you allowed to put in?

JGP: Honestly, the character was an original creation of Frank Darabont. As far as I knew, Morales was going to be a lone wolf, but when I got [to the table read], they’d transformed him into a family man. I thought it was an interesting parallel to Rick. As an actor you try to put in as much backstory as you can and there’s magic that sometimes happens in the moment. Ultimately, that component of having the family added warmth to the character. So, we see much darker elements in season eight when he’s lost everything.

HEN: When you came back, was there a discussion about what Morales had been doing for a few years – or was that something you worked out on your own? Is that a satisfying part of the job for you?

JGP: In that case, I did have a discussion with Scott Gimple over the phone before we shot the scene. I undertood he wasn’t necessarily a villain, he was doing what he had to do to survive. As a fan and having such strong feelings, having to make that cognitive dissidence was a challenge.

I was visiting family at the time and I told my dad how I was struggling with it. He said, “Son, sometimes the seed must die to bear fruit.” It gave me access to it and a way to process it from that perspective. It allowed me to just give my all to serve the story.

HEN: I think you might have mentioned this on Talking Dead, but do you agree with Chris Hardwick’s view that, in a way, Negan and The Saviors could be the heroes of the story? And what do you think the show continues to reflect about society?

JGP: It did serve a purpose and show that Morales is human and you see it from his position. It implies a depth to The Saviors, they’re not just abject evil. It’s a bit more backstory and an interesting choice by the writer. And it shows Rick to himself.

I think it’s a lot of politics and extreme tribalism we’re seeing right now. And the discourse is frightening. It’s not that far-fetched, that if somebody should get a little trigger happy at any moment, things could devolve into an apocalyptic moment. I think it speaks to a general anxiety we have now and shows the problem with not being able to deal with difficult people!