‘Rocky Horror’ Shows A Bit Of Cheek At The Maverick 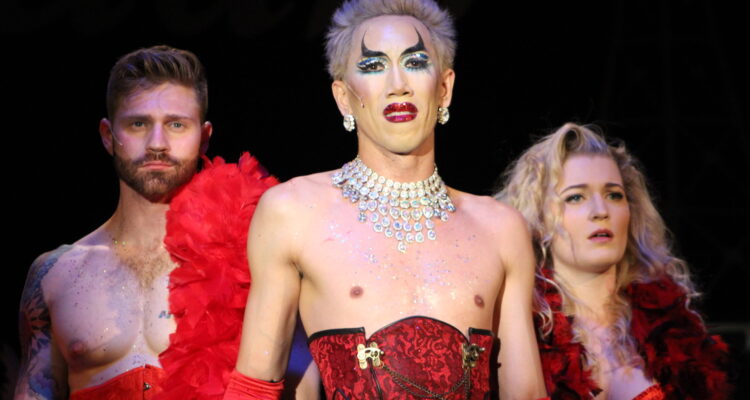 Experiencing The Rocky Horror Show live at the Maverick is a lot like seeing a 1970s glam rock band. It’s infectious rock ’n’ roll fun, a feast for the eyes and ears, and certain to upset your parents. But it’s also a hell of a lot more fun than the movie will ever be.

Led ferociously by Dennis Tong’s Frank-N-Furter, the cast is really strong throughout, infusing their performances with zeal and a genuine sense they’re having fun. Mackenzie Greiner and Paul Zelhart swing easily between the repressed Brad and Janet that arrive at the castle and the sexually awakened pair that dance around in lingerie much of the rest of the production.

And while it’s hardly Oh Calcutta!, being barely dressed is still a hurdle the actors overcame with apparent ease. What’s more, walking up and down stairs in giant platform heels is about the riskiest thing you’ll ever see on the stage.

Enthusiastic support is given by Stephen Hulsey’s Riff Raff, and Chris Marshall’s Rocky, who provides the creature with some kind of interior life instead of keeping him merely a dumb piece of meat. Rob Downs is a regular member of the Maverick company and his ease with the audience as the Narrator is fun to watch and essential. Audrey Curd’s Columbia and Enrique Munoz Jr.’s dual roles of Eddie and Dr. Scott.

From Kalinda Gray’s confident and dazzling opening number as Magenta, it really feels as much like a concert as a typical theater production. That might have been O’Brien’s intention from the beginning, but it’s certainly true at the Maverick. Also present — and probably inescapable — are the callbacks from the audience. Really a bleed over from the 1975 movie’s evolution from flop to cult classic to right of passage. They can enhance the energy and two-way flow between performers and audience any given night, or they can become a distraction. My suggestion to devotees— and you know who you are — choose wisely.

Newell likes keeping his audience engaged, even invested in his productions, and Rocky Horror, currently in its 6th run at the Maverick, is no exception. The popular show is a grand night out and will likely have you leaving the theater smiling and talking, even if you’ve seen it a dozen times. With a few weeks remaining in the run, get a ticket and go get weird for a couple of hours.