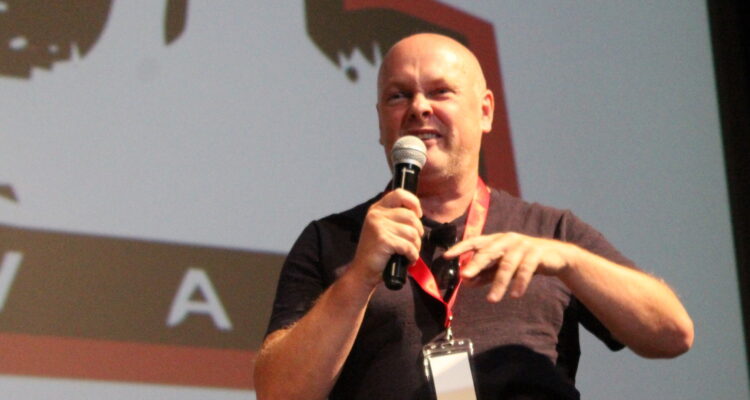 Director Julian Richards talks about making the meta retro '80s film "Reborn" during a Q & A at the 2019 Horrible Imaginings Film Festival at The Frida Cinema in Santa Ana, Calif. Photo by Jessica Peralta.

Theater seats buzzed and rattled in the dark. Screams came from everywhere, wedged between the sound of laughter. Percepto! had been resurrected from the morgue of movie gimmicks and somewhere, William Castle was smiling.

Day two of the 2019 Horrible Imaginings Film Festival goosed the audience at Santa Ana’s Frida Cinema with a battle of so-called “elavated horror” vs. pure escapism. Despite an afternoon realist short films and panel on “Real Life Anxieties,” Saturday, Aug. 31 was about getting away from it all — from the sublime to the ridiculous — in a horror movie.

“I’ve wanted to do that since I was seven years old!” festival founder/director Miguel Rodriguez gleefully shouted as he jumped around on stage at the end of the 60th anniversary screening of The Tingler. The B-movie classic starring Vincent Price closed day two with the extra-added bonus of Percepto!, the marketing gimmick Castle originally used in 1959 to draw teenagers to theaters.

Rodriguez said he worked with a former festival volunteer who found the original schematic and rebuilt the system using 1950s technology. They wired 16 seats with small motors that would vibrate under the seat during the movie’s famous climax.

As Price told the audience to “scream for your lives!” Rodriguez sat in the booth, feverishly pushing the numbered buttons. When the film was over, Rodriguez asked for a show of hands to see how many had received the full Percepto! effect. There were few misses.

The evening’s two new features also stirred a sense of nostalgia, beginning with Swing Low, a trip through Southern gothic via I Spit on Your Grave, with a cameo by Bruce Dern; and Reborn, designed as a meta 1980s B-movie featuring retro stars Barbara Crampton, Michael Pare, Rae Dawn Chong, Monte Markham, Chaz Bono, and a brief cameo by Peter Bogdanovich. Newcomer Kayleigh Gilbert provided the new blood as child desperate to find her mother.

“I realized this had become so meta,” director Julian Richards told the audience during a Q & A. “Almost like a documentary, you just go with the flow. That dangerous word ‘elevated,’ — I felt it elevated what was otherwise a B-movie.”

Wally and His Hideously Malformed Wart gathered a lot of attention for its stop-motion animation by 22-year-old Max Johnson, who drove across country with his dad for the festival. Johnson said he worked 12-hour days on weekends to get the film done over seven months.

“Depending on the scene, we could shoot as much as 10 seconds, or sometimes one second of footage,” Johnson said of the arduous process of stop-motion animation.

Butch, his latest short is also making the festival circuit.

From a teenagers battle with cyberbullying and its effects in Off Fleek, to an apprehensive police officer’s spiraling perception of reality in Hot Dog, the afternoon warranted laughs as well as screams.

While each film in this block offered a unique perspective on various themes and genres, the grisly depiction of a slave’s journey to freedom in Boxed as well as a young woman’s extreme suffering in an abusive relationship in LVRS captivated the Saturday afternoon crowd.

“It’s a very personal film,” LVRS director/star Emily Bennett said after the screening. “Domestic abuse is a really difficult thing to talk about. I didn’t know how to talk about it, so my film really had no dialogue. The paradox of staying in an abusive relationship is really hard to explore.”

Lizz Marshall, writer of the sexual abuse-themed short What Daphne Saw, spoke on the idea of using films as an instrument for change.

“It’s always been apparent to me, and it’s funny that now people are saying ‘oh you can use horror for social change,” she said. “But it’s always been there, and it seemed like a natural thing for this–a lot of my frustrations and fears going into this. It wasn’t necessarily something I set out to be a statement, but just kind of happened organically.”

The Horrible Imaginings Film Festival continues at 11 a.m. Sunday, Sept. 1. For tickets to individual screenings or day passes, or more info on the films being screened, go to hifilmfest.com.

Andre Leon contributed to this story.