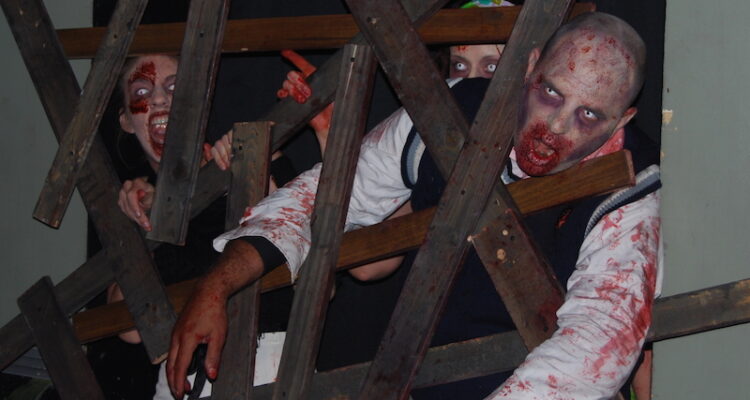 A Decade of “Dead”

Brian Newell doesn’t really like horror movies. Curious then, he’s had to live with his zombie creation for 10 years.

This month is the 10th anniversary of his stage rendering of Night of the Living Dead at the Maverick Theater in Fullerton. It’s Newell’s adaptation of the famous B-movie classic by George Romero that essentially launched the zombie genre as we know it. As the decade has passed for Newell’s production, the script has changed a bit, cast members have changed – including most of the zombies. Instead, it’s the audience that just keeps coming. And coming… And coming.

That’s a really fiendishly wonderful thing for theater-goers looking for a seasonal staple that can match Christmas standards like A Christmas Carol or The Nutcracker. And the month-long event frequently sells out quickly, which seems to imply that people are looking at it as a staple. They’ve come to plan on it.

The story is virtually unchanged from the 1968 movie, where a few people are trapped in a Pennsylvania farm house during a zombie outbreak and must work out how to survive with each other as much as keeping the zombies at bay. The production has pulled surprising drama from the dialogue, while keeping a sense of dread going that the zombies are just about to break down the door. And they do keep things interesting, year after year.

One of the regular zombies is played by actor and friend of Newell, Joe Sanders. He and Newell (and Newell’s wife, Heidi, who does the costumes) are the only ones who have survived the entire 10-year run. And it’s now become generational. Sander’s young daughter has joined the cast and an idea by Newell’s son adds a nice gag to the finale.

All this carnage remains a labor of love for the theater company, and as long as the crowds keep coming, Newell says he’ll keep the show and the theater going. But he still doesn’t like horror movies.

In a dungeon, five people struggle for their survi

HBO and the new HBO Max are nominated for 9 Golden

Bruce Willis and Frank Grillo star in the new epic