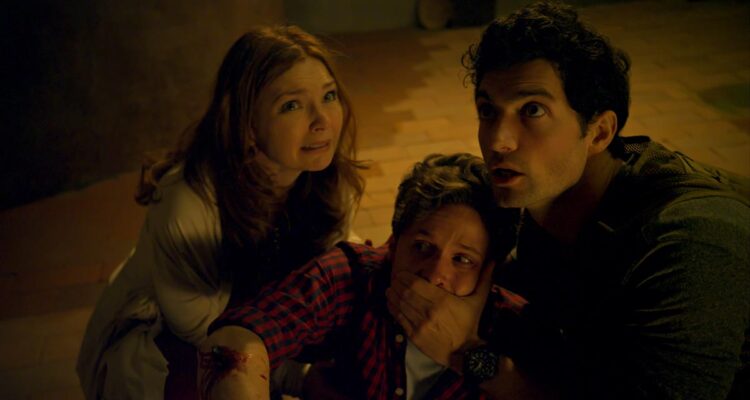 “When people leave this movie, they will know the names of every character in this movie,” says Jay Lender, co-director and co-writer of the new They’re Watching horror/comedy/sort-of-found-footage-but-not-really film out in select theaters and On Demand March 25. “How often does that happen with people in a horror movie?”

Indeed, while the film uses some horror movie methodology – a group of characters out of their element in a remote and creepy place – Lender and his partner-in-crime (co-director and writer) Micah Wright quite adeptly turn many of the horror movie clichés on their head.

“We’re exploring stereotypes and puncturing holes in them,” says Wright.

Set in the Eastern European country of Moldova, which borders Romania, the movie follows a home improvement show crew returning to Moldova to complete an episode featuring an artist and her husband who moved there when they bought a real fixer-upper (it’s a real dump). The film is shot from the perspective of the show’s camera crew on their equipment.

“My wife loves House Hunters and House Hunters International … and I saw a couple of different episodes,” says Wright. “I just thought this is a nightmare… It just seems very right for a comedic/horror take on it.”

When it comes to horror films, one of the key ingredients separating a great horror movie from a just-OK horror movie are the characters. And the character development is something They’re Watching does very, very right. First of all, they’re likable – yes, even Kate, in her own way. You care what happens to them. You want them to live.

But there will be casualties.

“We got a great slow burn, you’re gonna laugh your ass off … and things get wiggy at the end,” says Lender.

Adding to the comedy is the recurring theme of a crew of obvious Americans with their ridiculous faux pas (oh, we didn’t know we couldn’t film a somber religious ceremony here?!) set smack in the middle of some very intimidating locals that don’t find the Americans very funny at all. What makes the movie even more “real” is that it was filmed in Romania, and the real-life crew experienced a little of that weirdness that comes up in the movie.

Wright recalls their second day in country, walking into a restaurant with a beautiful open-air patio and “60 people just stopped eating and stopped talking and turned and stared at us…

“Everywhere you went, it was just like we had signs around our neck that said, ‘Look at the weird foreigners’… It really helped us direct those sequences.”

They’re Watching is a fun ride into a foreign land with some highly entertaining characters and surprising twists.

“We’d like to think of this as a workplace situation gone terribly wrong,” says Lender.

But don’t think you won’t get a good dousing of blood and screams. They’re there too.

“We open a movie with a brutal murder … and 40 minutes into it, everybody’s forgotten that that person’s gotten murdered,” says Wright. “That’s the power of movies. That’s the beauty of movie magic.”