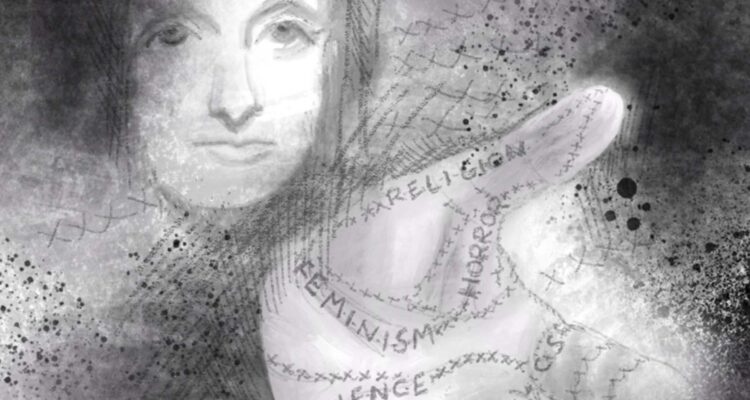 Mary Shelley's "Frankenstein, Or the Modern Prometheus" turns 200 years old in January 2018 and the work of a 19-year-old woman remains extraordinary. Illustration by Monica Edwards

“When I run over the frightful catalogue of my sins, I cannot believe that I am the same creature whose thoughts were once filled with sublime and transcendent visions of the beauty and the majesty of goodness. But it is even so; the fallen angel becomes a malignant devil. Yet even that enemy of God and man had friends and associates in his desolation; I am alone.”

— The Creature, from Mary Shelley’s Frankenstein

During a summer of “incessant rain,” the 19-year-old mistress of poet Percy Shelley dreamed up a story that would change literature, science and society forever. Seriously.

Two hundred years ago, the dream of young Mary Shelley became a book. Though it would take years for her name to appear on the cover, Frankenstein, or The Modern Prometheus quickly became a classic of horror and perhaps the first science fiction novel.

Most people know the story through the slew of movies, TV shows and theater productions it has since become, but the novel remains a provocative story of deep ideas that examined man’s relation with God, science, nature, his fellow humans and himself in ways that no other novel ever has.

To fans of the popular culture creature, it might also be surprising that the novel has come to be regarded as one of the greatest works of feminist literature in history.

Tania Modleski, author and professor of feminist literature at the University of Southern California, calls it one of the most imaginative horror stories ever invented.

“A story of ‘bad parenting’ and abandoned ‘offspring,’ it speaks in some ways to the child in all of us,” Modleski says.

Pointing out the novel’s famously shifting narrative that gives both Frankenstein and his creation’s point of view, she notes “we sympathize alternately with ‘father’ and ‘son,’ with the man who created a monster and then spurned it and with the monster who at first is full of goodness and sympathy and only wants to be loved.”

Micol Hebron, associate professor of art at Chapman University, says the novel is often overshadowed by the movies that followed but is also overlooked as “a remarkably complex and philosophical book about the quandaries of human nature and the nature of kindness.”

“It was written by a 19-year-old whose mother was one of the first and most important feminist pioneers in European history,” Hebron says.

She contends that Frankenstein, despite its male narrators, is a story told very much from a young woman’s perspective.

“Nurturing, eco-conscious, and concerned with both the socio-emotional well-being of man, as well as the nature that surrounds him. These are still feminist concerns today.”

“Should we interfere with nature … or – depending on your beliefs – the will of God?” he says. “Scientists are now closer to bringing the titular character’s work to fruition, and are usually dubbed ‘Dr. Frankenstein’ in the press for doing so. Stem cell research, genetic engineering, even IVF are viewed by some as ‘unnatural,’ even immoral. People are still divided on the ethics of such issues and will be for some time to come.”

In a novel chockfull of powerful themes, Jacobs says one lasting idea for him is “belonging.”

“Of having a place in society, of having an identity, of having family and friends. In the book the creature is brought to life but abandoned by his creator, who is horrified by his handiwork.

“The creature is destined to remain an outcast,” he says. “All it desired was a companion, someone to share its life with.” But Victor rethinks making the creature a mate and destroys it.

“Had Victor kept his word and made the creature a companion,” Jacobs says, “he might have saved himself a lot of woe.”

In a book with so many layers, Hebron believes one of the most provocative and lasting ideas is a surprising one: colonialism.

“The colonizing of nature, man and biology, and of the individual suffering that results from being lonely and misunderstood in the wake of our promethean accomplishments. I could easily see this being adapted into a Black Mirror episode!”

Modleski says her view of Frankenstein changed after reading literary critic Ellen Moers’ 1970s interpretation, which put forth an additional new feminist and autobiographical view that most people hadn’t considered before.

“Birth and death are intermingled in the novel – Frankenstein, after all, creates his monster out of dead body parts dug up from graves – so we can see how Shelley’s experiences were part of the raw material out of which this strange and haunting novel would be created,” Modleski says.

Mary Shelley’s famous feminist mother, Mary Wollstonecraft, died while giving birth to her. Percy Shelley, her lover at the time she wrote the novel and her future husband, was married to a woman who later drowned while pregnant with his child. Before Mary married him, she gave birth to a daughter who died during delivery and later lost three of four more children at very young ages.

“We can also see how there could be a working out of unconscious anger Mary may have felt at being ‘abandoned’ by her mother and perhaps at her husband,” Modleski says. “Mary was never comfortable with her husband’s practice of ‘free love.’”

How different a work Frankenstein is from the romance and domestic-life novels written by women at the time Modleski says is nothing less than “extraordinary.”

She says second-wave feminists of the ‘70s were exhilarated at discovering such deep and taboo subject matter being presented with horror and poignancy.

But the greatness of the novel might not have been enough by itself to force the publisher to print Shelley’s name on the cover for the first printing. Especially considering how provocative it was for the early 1800s. It was only in the second printing of the book 14 years later, after the story had been translated into a successful play, that Shelley was given full credit as its author.

“Well, considering J.K. Rowling used initials instead of her name when writing the Harry Potter series, not much has changed in 200 years,” Hebron says. “Can you imagine society heralding the work of a 20-year-old woman as that of a genius – even now?

“I think that even today a lot of people are unaware that Frankenstein was written by a woman the age of a college freshman,” Hebron says. “Imagine how different things would be if all the under-recognized women in history were as known and celebrated as the male geniuses that disproportionately fill the history books?”