Dancing With The Devil In ‘The 16th Episode’ 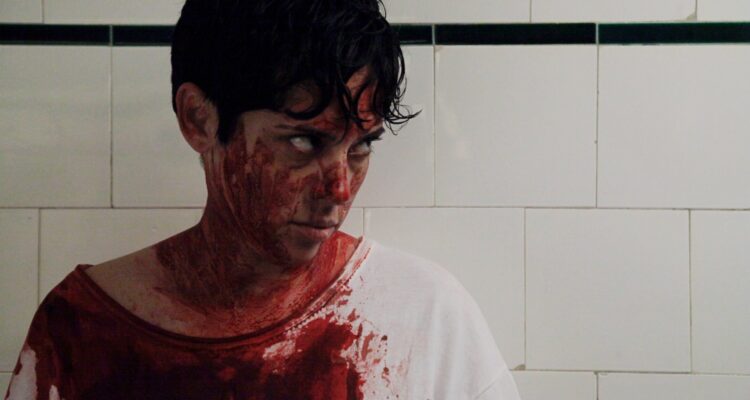 Rebecca Ramon shares something interesting with Linda Blair. Ramon, like Blair in 1973, makes her feature film debut as a woman possessed by a demon. But Ramon plays a blogger, so it’s all very 2019.

Ramon stars in the new movie The 16th Episode, available to stream June 28. Hungry for views, Ramon’s character, Helen, and her friends are a group of bloggers who adventure into an unknown country where they meet some strangers involved in a Satanic cult. A dance with another woman in the mysterious cult invites Helen’s dark passenger

Halloween Every Night talked to cinematographer/editor/director — and now actor Ramon about playing possessed and her first movie experiences.

Halloween Every Night: What was it like to play a character that was possessed by a demon?

Rebecca Ramon: Fun. It was exciting. It was like night and day, you know, from playing nice and more of a people-pleasing type of personality to full-fledged demonic. It was fun for me because I often don’t get to play with my emotions.

Often in society we are taught to control our emotions but, I’m an artist, I’m an actor, I’m an empath. Being able to play a transfer of energy and absorb all these different energies and play off of that and give it back, all of that was fun and exciting for me. To do it in such a safe place with directors, which allowed them to expand and delve into them in a way, that was very experimental.

HEN: What do you think is most terrifying about demon possession?

HEN: I noticed the makeup incorporated a lot of fake blood. What was it like to work with those kinds of effects?

RR: I didn’t have a problem with it other than there was a whole week where I was in blood, and at one particular location, there were some cold nights. It was exciting and some times were terrifying, which definitely added to the underlying cult fear in it. Some of it was real. It was terrifying being on a 12-foot wall for my own stunt and looking out and seeing a porcelain tub below … If this thing goes wrong, I fall and break my head open. I was terrified of those real emotions and working through Helen’s character thinking what she went through in the film.

HEN: What about your character appealed to you?

RR: She was an interesting character, very complex, and when I read the script everything she was going through resonated with me at the time in my life. I felt like I related to her actually in many ways.

HEN: What do you like most about the horror genre?

RR: It’s fun to be scared. I like that feeling. I just grew up on horror films. It kind of was introduced to us when we were young. I just grew up on the thrill of being scared but, it’s always even more exciting when you take away something from it. You know, those seem to be the most memorable films for me, anyway. Especially to make horror films, to me, is a good way to introduce yourself into the film industry.

HEN: What about the script mattered to you?

RR: It’s definitely a social commentary on social media. I really feel strongly about it, which is why I’m a filmmaker. It’s a mode of communication. Talking about how social media has really kinda plagued our society and has really disconnected us from one another and in my opinion is really like the end of civilization.

I was looking at the independent media to create my own project, trying to get visibility on YouTube. I was kinda going through the same thing as Helen.  That’s explored in this film and it’s why it’s a must-see. It’s a horror film and I know some people might not think it’s a serious genre. I think it could be. This film delivered a serious message, so I’m pretty proud of that.