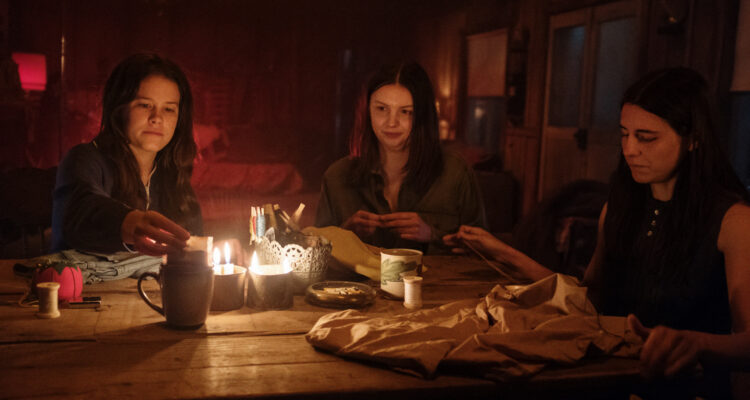 The women at the center of the Manson Family are seen in a new light in the film "Charlie Says" starring (left to right) Sosie Bacon as Patricia Krenwinkel, Hannah Murray as Leslie Van Houton and Marianne Rendon as Susan Atkins. Photo courtesy IFC Films.

Charlie Says presents viewers the under-told story within the most notorious crime story in modern history.

Leslie Van Houten, Susan Atkins and Patricia Krenwinkel were the young women at the center of the Manson Family. During the Tate-Labianca murder trials of 1970 and 1971, the three appeared as crazed lost souls, the embodiment of a youth culture destroying America.

Screenwriter Guinevere Turner, whose previous work includes American Psycho, Go Fish, and The L Word takes a different view in the new film. The story walks a very fine line, allowing the three women, in particular Van Houten, to be seen as victims nearly as much as they are villains.

It’s a knowingly controversial perspective, but the intent is to explain and understand, not to excuse. Based on the books The Family by Ed Saunders and The Long Prison Journey of Leslie Van Houten by Karlene Faith, and even Turner’s own childhood in a cult, a mountain of facts and personal experience were hers to draw upon in writing the screenplay.

Turner spoke with Halloween Every Night about the film as well as Van Houton’s possible parole.

Halloween Every Night: The Manson Familly and Tate-Lobianca murders are a pretty well-documented moment in crime history, yet looking out through the eyes of the women in the “Family” is an under-used prism. You’ve done it in a way that doesn’t feel like a docu-drama. It has a nice indie feel that allows these women to be just be human. I can see some real challenges with that. I’m curious what they were for you?

Guinevere Turner: My challenges were number one, there were so many digressions that one could tell I had to take out because they posed too many questions and didn’t serve the screenplay. Second, was that this would finally be humanizing to them, but not too forgiving. The question is even asked in the movie, ‘Would you be forgiving if it was your sister?’

It took me a long time to find the story of Karlene Faith and her book, and no one has told that story. In the movie, you see them, [Leslie, Patricia and Susan] are stuck in the late sixties and Karlene is a new feminist. I wondered if people would think I made her up.

I love the moment you see the actors faces when they realized they’ve been duped. It’s powerful. Through post production, I’ve seen the movie eight times now and I still cry at the end of the movie every time.

HEN: Now that the movie is out, do you worry people will think you’ve gone too easy on a group that most people think are monsters? Or is the greater anxiety you haven’t made them human enough and people won’t care?

GT: I went into it knowing there would be some people who think it is too soft.  I read some things that they didn’t learn anything new. I know it’s a really good movie and it’s not telling people what to think. And because it’s the 50th anniversary of the murders, I hope they don’t think it’s just another Manson movie.

I really felt like he was manipulating on purpose, but he wasn’t a serial killer, he was a master manipulator.

GT: Every time there’s nudity it’s done to show Manson trying to manipulate and show dominance over women.  We talked it over with the actors. We told them this has to feel uncomfortable. It’s not a romantic movie and they are not somebody’s girlfriend.

Incidentally,  the scene by the fire where the young woman reveals her scars, that was [Julia Schlaepfer’s] first movie ever and it was freezing. There’s a little detail in the movie where Matt warms his hands before he touches her. He makes it look creepy, but he was trying to be sweet because it was so cold.

HEN: Do you believe Leslie Van Houten should be paroled?

GT: I didn’t want to make it a work of advocacy. But I think it’s clear I want her to be free. These women are in their 60s and look at what they done. They are no longer a threat to society. It’s silly.