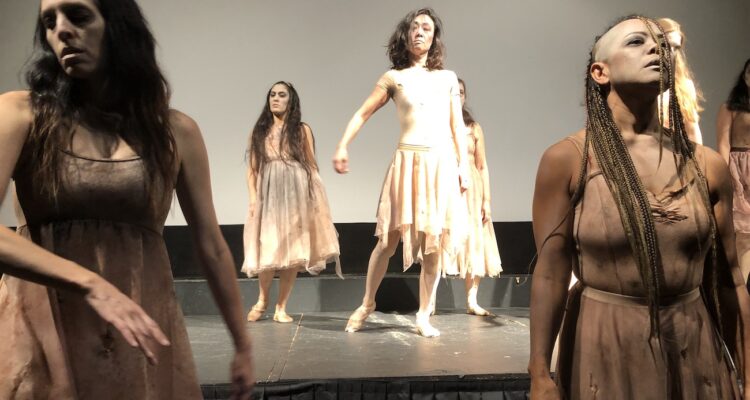 The opening night’s feature, Satanic Panic echoed a short film that proceeded it, A Hell to Pay. Both were fun, over-the-top cautionary tales about pizza delivery to Satanists, so everyone got the event founder’s joke. Most, also got some pizza.

Accenting the opening night’s key moments were members of the Leigh Purtill Ballet Company performing guerrilla versions of the centerpiece of the annual Sweet Sorrow: A Zombie Ballet. New films. New performers. New perspective. Together, all of the elements conspired to rev up momentum at the ten-year-old horror fest at Santa Ana’s Frida Cinema.

Satanic Panic’s tongue-in-cheek slap down of the wealthy featured a red-clad Rebecca Romajn as the head of the coven. Audiences lauded the two-hour, 12-film This Mortal Coil Short Film Showcase, with films such as the funny and quirk dialogue of Walk In Closet and In Full Bloom, with A Hell to Pay commanding the most acclaim from audiences. But the unique approach to loss and grieving made In Full Bloom the most talked about.

Despite the film’s straightforward approach on the fear of raising a child for the first time, Changling director Faye Jackson during the Q&A Panel said of the film, “I’m not attached to any particular interpretation. I think it’s cool to see people interpret it in their own way.”

Other notable hits of the evening: the stirring of nostalgia in Playtime’s Over, and the gasp-inducing Milk,

Saturday’s “Shock to the System” Short Film Showcase begins at 11 a.m. For tickets to individual screenings or day passes, or more info on the films being screened, go to hifilmfestl.com.

Andre Leon contributed to this report.