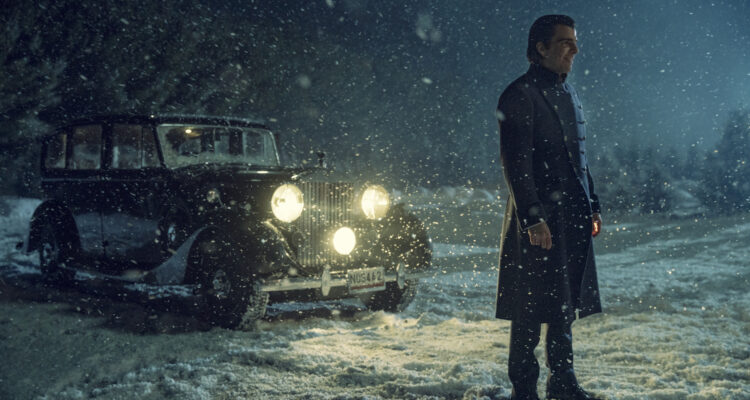 The cast is lead by Star Trek’s Zachary Quinto as the predator Charlie Manx. Newcomer Ashleigh Cummings costars as Vic McQueen, the mother trying to protect her son. Rounding out the cast regulars are Jahkara (JJ) Smith, Ebon Moss-Bachrach and Olafur Darri Olafsson.

Quinto and the rest of the cast spoke to media at April’s WonderCon 2019 in Anaheim.

Q: What brought you to the project? What do you think you could bring to the character to bring it to life?

Bachrach: For me what I am always trying to look for when I’m approaching something is looking at scripts or things is like… I guess it changes but for right now I think about love, and connection between people and how simple and complicated the sort of most basic emotion is and… I was really interested in this man who would do anything for his daughter who adores her, but he said he would do anything for her but at the same time there’s things in a way he is incapable of doing. That conflict and that sort of vibration between the two instincts or drives I think is like a really human thing that I am fascinated by. Does that make any sense?

Q: Zak we know The Wraith is very important for Charlie. What is your take on this relationship?

Quinto: Well they are sort of inextricably tied. Charlie is an extension of The Wraith and The Wraith is an extension of Charlie and so that plays out through the narrative of the first season in a lot of interesting ways. It was really fun for me to get to learn how to drive it and to have my own relationship with the car as an actor. Darri and I spent a lot of time in that car together.

Q: There seems the children that are failed by their parents and for each character Charlie Manx tries to help those children. I was wondering how you guys approached that feature of Manx?

Quinto: Yeah um, I think the more you learn about Manx the more you realize how failed he was as a child and how much trauma he experienced at a very young age and how the lack of resolution of that trauma and the inability to examine it is actually what evolves him into this kind of monster. And so, building on what Ebon was saying is like the idea of … where is the love and how do you love a character that’s so evil and doing such reprehensible things. I think you know for me it’s been about like going back to the source of that trauma. And I think you know [that] we were trying to build the idea that Manx actually really thinks he’s doing good on some level you know, saving these kids from their neglectful and selfish, thoughtless parents. He doesn’t really give so much thought or consideration to the cost. But, um, that was important for me to really understand that monsters are created through trauma and abuse and neglect and Manx is no exception to that, so how do we integrate that to make him a little bit more multidimensional, a little bit more complex and not so one thing. I think that’s an important part of making the show compelling, drawing audiences in into the multiple levels of complexities that are in him and in the world.

Smith: I think the crazy thing is … like you said all the characters in a way have been failed children, so you sort of see the results of the cool thing about the TV show is that the characters are so expanded, and you see so much more of what it’s like to be them. You sort of see the aftermath of what happens when kids are neglected and they are not taken care of properly and your kind of faced with the fragility of kids as a whole because on one hand you do have someone who thinks he’s rescuing them and saving them from these awful situations and that’s something we can all agree needs to happen … but I think it makes you take a look at yourself and the real world as well because you’re also faced with what it means to actually handle a situation in terms of what’s supposed to be, which means separations with parents and in some of the characters that have had to do that for themselves you see even the aftermath of that, so it’s kind of this terrifying thing in a sense where you have this supernatural stuff going on but you have very real consequences of reality and the way that we affect each other in family relationships and friend relationships and I think for all of us, it was kind of having to take a deep breath and like reflect on that within ourselves in our own lives and our own realities and tap into that to give it an authenticity that it deserves.

Q: What was it like to explore the kind of character?

Cummings: It was an incredible observation and it was something I … really enjoyed about Jami’s scripts was that um yeah the idea that there’s one theme actually in reality I think there’s a line later on that Linda says, I’m paraphrasing cause I can’t entirely remember, “People can be good and bad at the same time.” I really appreciate that multidimensionality and the contradictions that’s within a single human being because you know we are multifaceted souls and that was something I really liked to turn into Vic as well the contradictions, the folds, the pushes within her and it was really exciting to play, and I am looking forward to digging in.

Q: Tell us about the makeup.

Quinto: I’m not wearing any makeup (laughs). Yeah, the makeup was really important, you know, I have been interested in the idea of really being able to disappear into a character and transform myself in significant ways so that was one of the things that drew me into this role and to this project. It was really important that we found truly the best people for the job. I have worked with Joel Harlow before and so when I signed onto the project and I was meeting with Jami and Kari I said, “I really feel like we gotta get Joel.” It’s a tall order but luckily, he was available and interested and came on board and was such an amazing ally and collaborator for all of us. We really worked on what’s important about what’s the look of this guy and what and how do we represent and honor the character that Joe wrote and bringing them to life in a cinematic way. Joel did an amazing job, did amazing renderings and sculptures and built the prosthetics from that and one of the other things that we all did was identify the stages of Manx’s aging process and so we came up with five looks and we kind of assigned looks throughout the season, somewhere he was in his story, it was a bit of a formula for us to get what kind of look it was and then I was able to go off and develop physicality and vocal choices for each one for phases so that you know that when I showed up to work every day we knew exactly what we were doing and I knew exactly which version of the character I had to step into that day, so it was a unique process. It involved a lot of planning and it involved a lot of you know everybody getting on the same page but once we got into production, I had you know four-and-a-half hours to sit in the makeup chair and think about what I was doing that day and that was good, it was cool (laughs). It’s interesting to have that be a part of my job to show up four-and-a-half hours before everyone else you know, it really does put me in a specific mindset for the day, which is nice to adopt and kind of drop into that version of the character, kind of apply him layer by layer.

Olafsson: What I loved about what Jami did was that I think Jami really helped with Bing’s journey. Jami thank you for that by the way. She really did. By giving Bing, by giving him access to Ashley’s character, Vic, it sort of brings him much more into the story. So, it becomes much harder [for] us to see him [slowly] being dragged over to Charlie Manx and over to his cause and Charlie really does everything he can to make sure Bing believes in the cause as you said before, I mean at the heart of it, Charlie Manx says that he’s trying to save children from bad parents. I think most of us could agree that we would all be willing to take part in that but not in the way he would. But so, I think what attracted me to the story was just like when I read the book, I remember reading I remember enjoying Bing’s character … I was really thankful for that, that I could really connect with him on an even deeper level through the scripts. And you know it’s hard to cause you were talking about playing someone who is basically a monster in many ways. We as actors we don’t really get to, I don’t at least feel that I have the right to, judge anyone so to approach any character. I have to approach him through a way of trying to understand even when that’s really hard to do, sort of try and dislocate myself and my own person and my own opinions from that of the character. I mean I love Bing quite a bit and I feel for him very much. I think the right amount of how much I should feel for him. I really look forward to, I know you get one scene within the pilot, but I really look forward to people seeing where it goes and I mean I remember having so much fun doing it even that scary and it was horrible on some of those days where I’d work, that’s still so much fun when you get to work with so many talented people and work on a beautiful scary story and that’s exactly what “NOS4A2” is. It is so beautiful but so terrifying at the same time.

Smith: It just makes me hyped because I know there’s so much more. That it’s like this is so, so good. Just it’s like if you guys like this, you have no idea what’s coming. So, it just makes me more and more hyped to see the rest of the season develop in your guys’ opinion.

Quinto: It’s always good. When you’re making a first season show and you know you do it in a vacuum, and so it’s always a great part of the process to finally be able to share it with people. And for a show like this to have a premiere at WonderCon and share it with the fans. It’s always really exciting, so I think we all were encouraged, and we felt welcomed and it’s cool.