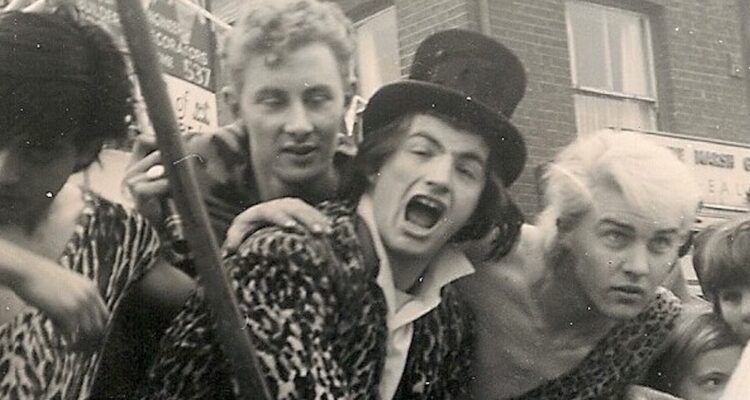 One of the tracks sure to put extra zip in your Halloween playlist is Screaming Lord Sutch & The Savages' "Jack The Ripper."

Does the thought of breaking into “The Monster Mash” for the millionth time make you less than mirthful this Halloween? Have you had it up to your teats with too many tunes about witchy women? Well then, please allow Dublab.com radio show Bubblegum & Other Delights to be your spirit guide for curating the kookiest setlist this October 31st.

As a noted authority on—and apologist for—this genre of sickly sweet musical morsels that ruined the public’s collective appetite during the late 1960s and early ’70s, I’m a fairly frequent visitor to the novelty-song section. Halloween? Hell, I have Thanksgiving records…

If you dig these tunes, pick them up used at your fave local record store. But since that’s not always possible, there are plenty of online options ranging from instant song downloads to mail order vinyl from sites like eBay and Discogs.

“I Put a Spell on You”: Screamin’ Jay Hawkins

You know this one; of course you do. But do you fully appreciate the raw power of the gutteral, 1956 recording from the showman who allegedly sired 75 children (that he knew of)? Screamin’ Jay also at least partially birthed shock rock with his incredibly theatrical performances, voodoo paraphernalia and operatic howl, thus paving the way for several artists on this list, which is why he gets the top slot. The tune has been covered by a wide range of artists, including Nina Simone, Nick Cave, Marilyn Manson and Bryan Ferry.

If you’re not familiar with SLS, I beg you to do your due diligence because the man owned the idea of making Halloween a 365 affair. Born into that generation of Brits who played in the rubble of WWII detritus, David Edward Sutch grew up (sort of), rechristened himself after the notorious SJH and dressed like England’s most notorious serial killer. His niteclub show involved choreographed dances with his sometimes cavemen band (Ritchie Blackmore was a member) and staged “murders” featuring fake blood and entrails—this was an entertainer who could give Liberace and Elton John showmanship lessons! “Jack the Ripper,” the signature tune for which Sutch performed the aforementioned “surgery,” is a super-fun singalong complete with bloodcurdling ladyscreams. Cool doc alert!

OK, kiddies, gather ’round while I tell you about the olden days when movies cost a nickel and every year a group called The Cramps—yes, they had the audacity to name themselves after the monthly curse bestowed upon ladies—played a concert on All Hallows Eve. And, I think most of us olds would agree, “Goo Goo Muck” was their very bestest song. The End. Coda: If you are feeling adventurous, the original GGM by Ronnie Cook & the Gaylads is a fun romp as well.

I’ve always been a fan of this song—especially the cover by Van Morrison’s mid-’60s R&B outfit Them—but figured I’d mix it up by putting Motörhead’s versh on this list. Because, you know, Fucking Lemmy, man! PS, fun fact: the original, by John Mayall & the Bluesbreakers, was produced by Aleister Crowley groupie Jimmy Page. Extra added devil horns!

Contemporary power pop band The 88 does a fantastic job of spinning a sweet stalker song that’s sorta scary and somewhat romantic. Either that or I am mentally ill because I can’t quite shake this tune.

We all love the Addams family, right? Well, the classic creepy TV show’s soundtrack by Vic Mizzy is equally brilliant. I recommend a couple of songs named for the show’s characters: The snazzy “Gomez” and ‘Morticia,” a dark and romantic tune. “The Lurch,” which was a 45, has the family’s droll butler croaking out moves to his signature dance. Even those with rigor mortis can do it as demonstrated on ABC’s “Shindig!” Find it or the soundtrack in the stacks or on Discogs.

First off, the British beat group’s moody, dark take on “I Put a Spell on You” also kills, but it would be sacrilegious not to suggest Screamin’ Jay’s disc. This song is simply my Manfred Mann safety. The group’s rousing R&B rave up about a rather spirited gal—fronted by Paul Jones’ roiling vocals—is also top notch. This live version begins around the 3:35 mark.

I’m not much of a Metal gal, but I must admit to loving on the Grammy-winning Swedish band Ghost some. Again, it’s the theatricality that got me on songs like “Rats,” and if you’re not familiar with it or not a fan, I beg you to take a look through my lens. The makeup, the costumes, the dancing? Does it look familiar at all? Is leader/singer Tobias pulling—or should I say, scratching—our leg here? “Rats” is simply “Cats” on Halloween! And if the band’s million millennial fanbase does not get the joke, that is truly fucking scary.

“The Mummy”: Little Tibia and the Fibias

Trust me. This frat rock number from the 1967 Rankin Bass stop-motion animation classic Mad Monster Party is a solid dance tune that will get any crowd of stiffs shouting out the refrain, “It’s the Mummy!” IMHO, it’s the “Louie, Louie” of Halloween songs.

“All Black And Hairy”: Gravedigger V

The G5 were a bratty, ’80s teenage garage band from San Diego and this is their cover of a fantastic Screaming Lord Sutch song. And while a sealed versh of the record may be hard to find—try Discogs for a used one—it’s worth mentioning because it manages to be even better and snottier than the original ditty about a creature that creeps out of a graveyard.

If the B-52s’ “Rock Lobster” is your go-to party jam, “Horror Asparagus Stories” will show you that Athens, GA, doesn’t have a patent on kitsch. This hard-to-find 45 from 1966—which was comped on Pebbles Vol. 3 in the reissue-crazed ’80s—must have been the inspiration for the B-52s tune, right?

The Zombies’ 1968 concept LP Odessey & Oracle is a beautifully arranged bouquet of tunes roughly themed around the concepts of time and perception in a small British town. Harmonic songs weave tales about childhood, blossoming love, maturing friendships and the sorrow of growing old. But one of these things is not like the others. With its haunted organ and accordion accompaniment, “Butcher’s Tale” is a side trip to heck that recalls the sheer carnage of WW1 in all its gory and it is guaranteed to serve as the perfect closing entry for your Halloween playlist. Stick it on as the spooky soundtrack to your haunted house—or a late-night, party-guest removal system. The horror… The HORROR!