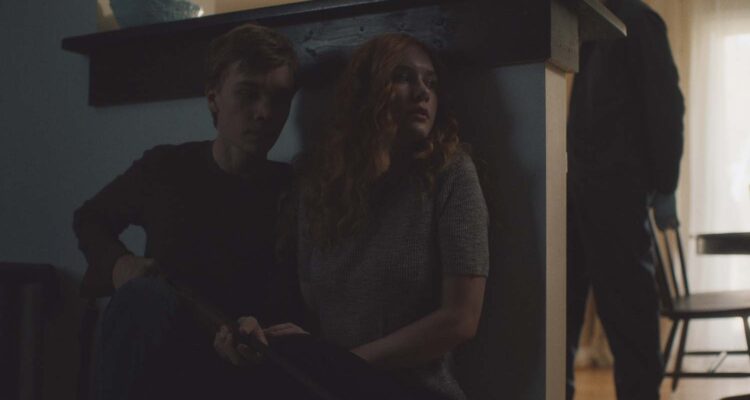 (L-R) Charlie Plummer as Tyler and Madisen Beaty as Kassi in the thriller “THE CLOVEHITCH KILLER,” an IFC Midnight release. Photo courtesy of IFC Midnight.

‘The Clovehitch Killer’ Makes Something New Out of Something True

Serial killers are a tricky subject.

Authors and artists who use them in their work must walk a fine line between making a larger point about the killers’ horrific acts, and potentially glorifying these criminals while opening deep emotional wounds for victims’ families.

It’s a line Director Duncan Skiles carefully journeyed down while making the IFC Midnight horror-thriller The Clovehitch Killer, which is loosely based on the serial killer Dennis Rader, also known as “the BTK killer.”

“It’s my preference to keep his name out of print as much as possible because I know that there’s a culture of criminals that thrive on attention and I know that he is part of that and it goes into mass shooters as well and I just don’t want to feed into that,” said Skiles. “And I also know that stories based on this bring up pain for people who went through it and so that’s something that I’ve kind of struggled with and been conflicted about.”

But despite this inner conflict – or maybe because of it – the film effectively takes a familiar subject and makes it new, creating a story that places a wholesome family at the center of unthinkable acts.

Tyler Burnside (Charlie Plummer) is a teenage boy living in a religious Kentucky town and is the son of a seemingly upstanding man. They are Boy Scouts – literally – with his dad, Don (Dylan McDermott), serving as a Scout leader. Underlying the idyllic life of Tyler and his family are a series of unsolved murders that took place in the town years earlier.

“Well I wanted Tyler to be a very good kid who was sort of old-fashioned in the way that he was devoted to his parents but I wanted him to be conflicted about, first of all, his own budding sexuality … and not really having a framework to understand what he’s feeling as a 16-year-old boy and then for that to be further complicated by what he discovers what his dad is into and wondering if that’s somehow related to what he’s into,” said Skiles.

Inspired by Alfred Hitchcock, Skiles said he wanted to create a story that isn’t predicated on figuring out who the bad guy is but rather on how a person reacts when finding himself in a situation like this.

“You put the bomb under the table and you show the audience that there’s a bomb under there and then you can have a normal conversation between two characters and it’s very tense,” he said. “The idea was to plant the idea in the audience’s mind that this guy is probably a serial killer and then the most banal, mundane interaction becomes tense. So the focus is on making him a normal dad. … I think that there is always a power dynamic with him. Even in lighthearted moments, you’ll see that he’s always gotta be in control even if it’s really subtle.”

While the audience sees the world through Tyler’s eyes, McDermott’s Don stares back. He manages to masterfully persuade us that he is an all-American dad while at the same time raising more than a few doubts about his true nature.

“Shadow of a Doubt by Hitchcock in 1943 has a similar premise,” said Skiles. “It’s about a young woman who suspects her uncle is a killer … when I watched it I was just reminded that a story like this can have comedic elements and it can have light family moments and also I think that they reveal that he’s a killer somewhere in the middle of the movie, so it reminded me that it doesn’t necessarily have to be a whodunnit, but more of a what-would-you-do type of story, to work.”

Another element of inspiration came from films depicting horrific acts in matter-of-fact settings.

“I was very inspired by The Vanishing from 1988 because of the way it takes a terrible event and treats it very matter-of-factly and a lot of it takes place during the day,” he said. “The main crime happens in the middle of the day at a crowded gas station. And also Funny Games for similar reasons: in a pleasant location, no music. And Zodiac, the lake season, a terrible, terrible thing happens in a very pleasant setting … I guess I would describe it as kind of a European sensibility to me. I mean I’ve seen it more in European films. It’s kind of like reserved approach.”

Ultimately Skiles wanted to create a film that made an impact.

“I wanted to create something that would stick with you because I watch a lot of movies. I feel like I see kind of the same stuff over and over, so I just wanted to try something different,” he said. “I wanted to create something I guess that was deeply disturbing. … I think there is something valuable within the story in imagining ourselves in that situation and wondering what we would do, and also being aware of what people are capable of in life. I think that that’s something that’s worth paying attention to.”

The Clovehitch Killer is available to rent on Amazon Prime, Vudu and Google Play.