Love And Business Amid The ‘Creeps’ 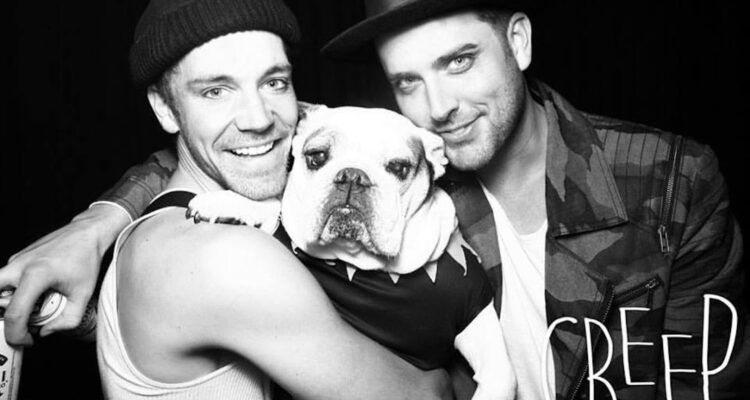 Justin Fix and J.T. Swierczek of Creep LA with their dog. / Photo courtesy Creep L.A. and Just Fix It Productions

Creep L.A.’s Justin and J.T. are a great team. The agent provocateurs of L.A.’s immersive theater scene, they are smart, creative and even photogenic. And newlyweds. They’ve got it all. And all of it almost didn’t happen.

It was just over 13 years ago, when former NSYNC member Lance Bass was throwing his annual “Friendsgiving” party.  J.T. Swierczek was working to establish himself as a businessman and lounge owner. Justin Fix was newly arrived from Colorado. Then they discovered each other at the party. It wasn’t exactly love at first site. In fact, it was closer to embarrassment.

“We happened to be wearing the exact same outfit,” J.T. says, “From the same Converse to the same jeans, to the same shirt from H&M. We looked identical, so we avoided each other like the plague at first.”

But they eventually gravitated toward each other.

“When we finally got to talking, we were actually talking over Tater Tots,” J.T. says.  When they got married, Bass unfortunately had a gig in New York, but “sent us ten different types of Tater Tots.”

All these years later, Bass and the other friends at that party remain some of their closest, and are the most ardent supporters of their events.

Both were transplants from Colorado, which gave them an instant bond.

“I immediately liked the vibe Justin gave off of a kind, carefree Coloradan,” J.T. says. “All the things the people in the L.A. lounge business were not. I showed interest. He did not. [Justin] actually agreed to meet me at this place in Hollywood — kind of late — and he was a complete and total no-show. The next day when I asked him why he was a no show and he said he didn’t even remember telling me he was gonna show up. So I was like, ‘OK, I’m done. Bye.’ Luckily, he made it up to me.”

Justin brought him bags of his favorite candy. BIG bags.

“He loves Butterfingers and all the Sour Gummy kind of candy,” Justin says.

But the obstacles didn’t end there. Two months later, Justin had to take a job out of town.

“We stayed in touch and really kept the relationship up and I came back to celebrate his birthday,” Justin says. The long distance relationship wasn’t easy. Justin had to think big to leave town and go back to his job on a high note.

“He organized a surprise hat birthday with all of my friends who he barely knew,” J.T. says. “I knew this [relationship] was something different. In the LGBT community, trust is a big factor, and when you find trust right away, it’s a very powerful force.”

Justin returned from his gig a few months later and the two got together for good.

“At the end of the day, whether we’re partners in life or partners in business, I feel like we have embodied, appreciated and really tried to uphold our values of what we hope for ourselves and for each other in our relationship.”

The two formed Just Fix It Productions, a venture that Justin says, “bring balance to their relationship.” But not exactly the way you’d think.

“J.T. hates all things horror,” Justin says. “We don’t watch scary movies together because he spends half the movie with his eyes closed.”

Laying out the business, the two figured out the dynamic very quickly.

“This is where the opposites attract idea comes in,” J.T. says. “Justin always had this idea to start a haunted house. I was the more risk averse, but Justin kept persevering, and I remember the moment we were in our living room and said, ‘you jump, I jump,’ and we never hesitated and never looked back after that.

“Doubters are a really important thing,” J.T. says. “‘You can’t…’ ‘You won’t …’ All of that stuff did nothing but fuel us. We don’t hear as many of those doubters anymore and we’re grateful for that.”

Justin believes JFI works because they “respect each others lanes.”

“We’re both different people I’m the creative, he’s the business. That’s been really nice for us. We’ve been incredibly supported by our friends and fans. We’ve built something together we’re really proud of.”

J.T. jumps in. “I think it’s the really the secret sauce. Being able to let creatives fly. Doing whatever I can on the back end to making that the easiest process for them.”

In Creep L.A.’s five productions, Justin writes the story for the production, most recently 2019’s Haus of Creep, about an art exhibit that slowly goes horribly wrong. J.T. worked out the production logistics and finances. Justin juggled some of the direction along with being a cast member. Exhausting work that the duo now say they are likely to leave behind, or perhaps put on hiatus, to bring together different productions, including their newest, this month’s Night Fever, an homage, for better or worse, to the 1970s New York disco scene.

“I think the genre and the form of it are different. We’re always trying to re-invent the typical haunted house experience or re-invent the murder mystery dinner party,” Justin says. “This is an epic dance party, recreating that wild night in LA, but taking it back to 1977 New York City.  We thought, ‘how fun would it be to launch this pop up during Valentines?’ We’re saying it’s a theatrical show, set in a fast-paced nightclub environment similar to Studio 54.”

The music will combine with opportunities for audience members to interact and find out the stories and the gossip about the characters and their lives.

“We realized at the afterparty for our wedding, how incredible would it be to re-create this feeling that every one had,” J.T. says. “Everyone in that moment was just enjoying being present and with each other. We thought, ‘how do we do this again for other people?’ And from there it’s grown.”