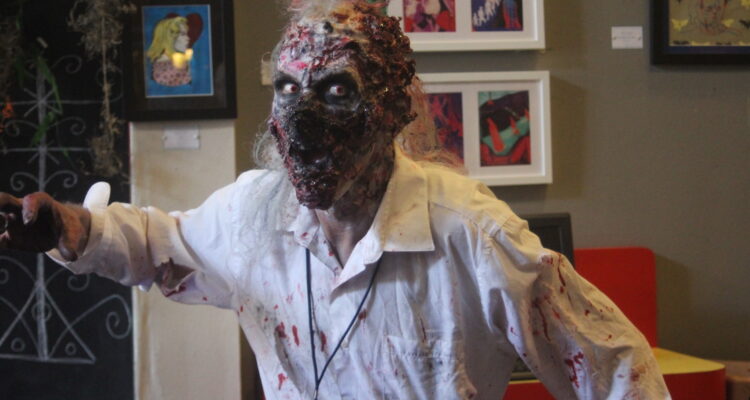 The 2019 Horrible Imaginings Film Festival returns Labor Day weekend to the Frida Cinema in Santa Ana, Calif. The weekend fest includes the latest in horror and thriller filmmaking, Q & A's with directors, actors and writers, awards and zombie ballet. And maybe this guy, too. Photo by Jessica Peralta.

The arthouse will feature three days of independent feature and short films from all over the world, including cast and crew Q&A panels, special guests, an award ceremony, and live performances by Leigh Purtill Ballet Company’s  Sweet Sorrow: A Zombie Ballet. Tickets are available online or at the door, with individual day tickets $20-$40, or $80 for a three-day, all-access pass.

The festivities kick-off at 3:30 p.m. Friday, Aug. 30 with several short films produced by the Creating Creators organization and numerous other filmmakers.

The evening will feature zombie ballet performances before culminating in the opening night feature, Satanic Panic. The horror-comedy starring Rebecca Romijn and Hayley Griffith, in which a woman has to fight for her life as a seemingly profitable work delivery escalates into surviving the hostile advances of an elite Satanic cult. But the night doesn’t end when the film credits roll, as the opening night party will commence directly after and run until Midnight. Ticket holders, filmmakers, and all guests are welcome to attend; however, all passes will be checked for valid entry.

Day two (Aug. 31) of the festival begins at 11 a.m. with a lineup of 17 short films, followed in the afternoon and evening by three feature films, and a panel Horror for Humanity-Real Life Anxiety Through a Genre Lens. Features include Swing Low, a nature photographer’s story of survival, followed by the marquee feature Reborn. The evening is capped by a screening of the Vincent Price-led William Castle film, The Tingler (1959).

For tickets to individual screenings or day passes, or more info on the films being screened, go to hifilmfestlcom