The Real-Life Forest Behind ‘The Forest’ Movie 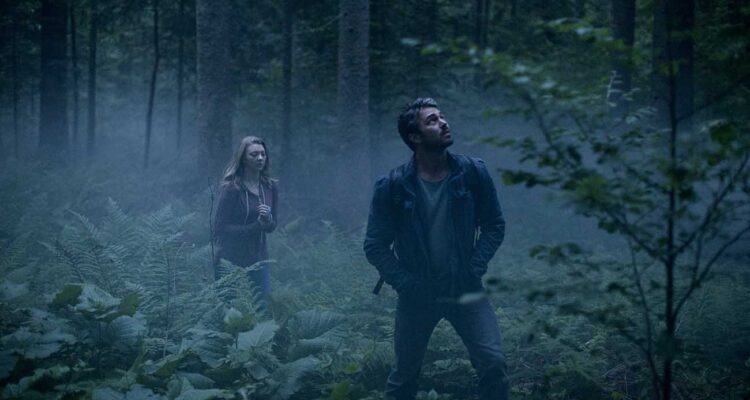 Dark and densely populated with leafy, towering trees, Aokigahara forest, or Jukai (Sea of Trees) as it is commonly known in Japan (aka Suicide Forest), is located at the northwest base of Mount Fuji in Yamanashi Prefecture. The forest is situated on 14 square miles of iron-rich volcanic rock and ash and because of the scantness of sunlight permitted by the closely growing trees, few lifeforms are able to adapt to its inhospitable conditions. Some Japanese believe it is no coincidence the place holds a mysterious allure to the desperately suicidal and many contend it’s the magnetic properties of the forest’s floor that draw them in. Whatever the attraction, draw them, it does.

Jukai has long been associated with death and is the source of many ancient demon myths in the culture. Culturally, it is thought to be haunted by yurei (angry spirits) of elderly people who were deemed an untenable burden to their loved ones and brought to the forest to die. The practice, known as ubasute, dates back to the 1800s if not before. The forest’s notoriety in Japan’s wider culture, however, came about with the publication of Seichō Matsumoto’s 1960s novel Kuroi Jukai (Black Sea of Trees) and increased later in the ‘90s with Wataru Tsurumi’s The Complete Manual of Suicide.

Since then, Hollywood has seen fit to feature the mysterious locale in four different movies, the latest of which is titled, The Forest.

Released Jan. 8, the movie centers around an American woman named Sara (Natalie Dormer) who travels to Japan searching for her troubled twin sister who has gone missing. After meeting a reporter and telling him of her sister and troubled family history, the two end up searching for her in the mysterious forest where Sara confronts supernatural forces along with her own personal demons, which together conspire toward her demise.

According to a report by the National Police Agency (NPA), cited in Japan Today, 23,971 people committed suicide in Japan in 2015. Jukai is the most popular suicide destination in Japan and globally it is second only to the Golden Gate Bridge. Annual estimates of attempted suicide at Jukai are around 200 with between 50 and 100 actual deaths occurring each year. A minimum of once per week, someone walks into the forest with a rope or possibly a lethal dose of prescription pills and is never seen alive again. Indeed, the sprawling forest with its scant light and disorienting maze of trees often seems to pull its visitors so deeply into its dark desolation that they are never found at all.

So, why do they do it? And what is it about this forest in particular that many who are depressed or suicidal have described as calling to them? It’s an intriguing question, albeit one that is unlikely to ever be answered with any objective clarity. The reasons behind Japan’s high rate of suicide in general, however, are “somewhat” more easily understood. I emphasize somewhat, because even after being married 20 years to a Japanese man and living in Japan for two years, I was unaware that the reason such things were not discussed – and they are not – wasn’t because suicide itself is taboo, but rather because it isn’t deemed worthy of conversation.

Japan is a Buddhist culture and as such, there is no historical tie to Christianity nor to the notion that suicide is sinful. On the contrary, the prevailing attitude toward suicide is neutral and even respectful in many situations, where it is viewed as honorable and a way of taking responsibility for one’s personal failings. These views aren’t merely pedestrian, but are clearly reflected in the establishment itself as well as its policies.

According to a 2011 article in Japan Today, only 11 percent of the dead bodies Japanese police come into contact with undergo autopsy – compared to a 50 percent average autopsy rate in developed countries. Many of these deaths are widely assumed to be suicide and most Japanese recognize the potential for ill-doers to exploit the low investigation and autopsy rate, but are complacent, nonetheless. What’s more, insurance companies in Japan typically recognize suicide as a legitimate claim even when it is determined to be the cause of death.

The sharp economic slide at the turn of the century all the way up to 2011 is believed to be a significant factor in the spike in suicide rates during that period. This upturn captured the attention of government officials and measures such as suicide hotlines were put in place – but for the most part, Japanese believe the ways and whens one chooses to die are a personal matter and not for others to judge nor regulate.

While changes in attitude are slowly permeating the culture, depression has long been shrugged off and overlooked. Austerity is a deeply held character trait in Japanese culture and a high value is placed on the ability to suppress one’s own needs in favor of the greater needs of the group. As such, depression is viewed as a matter of social failing rather than as a medical condition.

Considering such, Tsurumi’s suicide manual – which long ago surpassed the million mark in sales – with its how-to instructions as well as rankings of numerous different methods for taking one’s own life, can be interpreted both as a reflection and a promotion of this attitude regarding austerity. Noting that the author insists his intention was never to encourage suicide, but rather to wake up the culture to its hardness and overly austere expectations, it is nonetheless difficult to overlook his casual descriptions of various suicide methods using such words as “marvelous” and “completely painless.”

Jukai’s latest cinematic appearance in The Forest, as well as in the three previous  movies attempting to depict its strange allure won’t likely rank among my list of must-see films. The forest itself, however, is rather intriguing and is certainly high on my must-see list for the next trip to Japan.