‘Missing in Jericho’: A Deep Dive Into True Crime Roleplaying 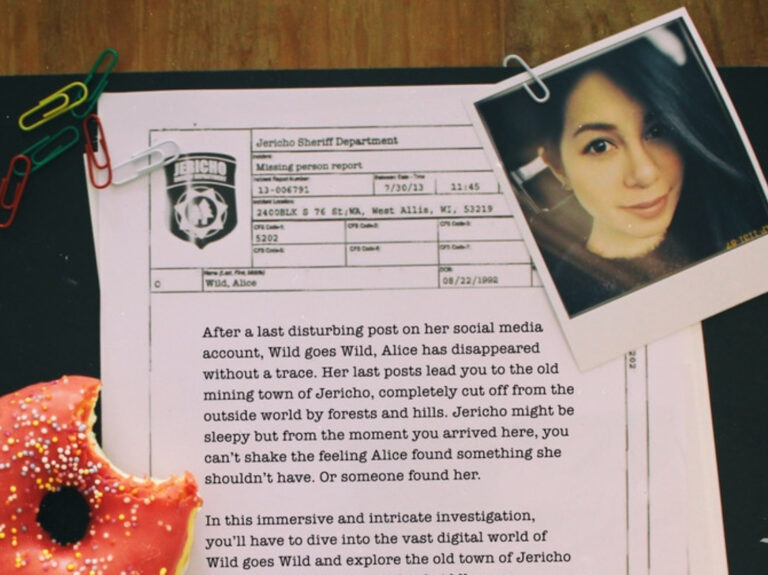 The true crime role-playing game Missing in Jericho asks the question "What do you know about Alice Wild?" / photo by Crimibox

You come across a woman tending to her rose garden. Asking her questions, something seems off. The tension builds as the questions become more pointed. Finally, you ask the big one.

“What do you know about Alice Wild?”

You feel yourself starting to lose her, until she finally snaps. “You don’t want to know the connections that I have,” she says.

This is Missing in Jericho.  A true crime role-playing game by Crimibox, a Belgian start-up. You and up to three players must step into the shoes of a detective to find out what happened to a social media influencer who went missing after visiting the old mining town of Jericho.

Crimibox’s games have been partly inspired by escape rooms’ interaction with characters and solving of puzzles, and the solutions bringing you closer to solving a wider mystery. Crimibox usually provides a container full of tactile bits like pictures, charts and even blueprints to help in the investigation.

Missing in Jericho allowed them to break into the U.S. market with a game in English and fully digital. Wout van Robays, creative director at Crimibox and the brains behind many aspects of the new game, explained the team strove to make waves on their first outing overseas.

“We wanted to create something very specific,” Robays says. “Something big, and with some nods to video games as well, because we wanted to make an immersive world.”

To gauge the desire for a game like Missing in Jericho, a Kickstarter campaign was created in 2019 to raise money for its development. Over 300 people bought access through the campaign, fully funding the venture. This was proof to the company there was a demand for more long-form versions of the games they had been making since 2017, as well as opportunity abroad.

Through their previous releases in Belgium and the Netherlands, Crimibox observed the puzzles were quite popular there. But being their games met at the cross-section of the true crime and puzzle genres, they tended to lean a bit harder into the true crime aspect to tap into the more niche of the two markets.

That changed with the prospect of coming to the U.S., where true crime is wildly popular. Robays said that this called for a heavier focus on making interesting puzzles.

American infatuation with murder mysteries would still play heavily into the development of the game. Crimibox’s games were usually designed to be played in about an hour or two. Missing in Jericho would end up being split into chapters designed to take about 10 hours to play.

Just like with traditional table-top roleplaying games, a lot of the fun comes from giving in to the fiction. The game should allow you to suspend your disbelief enough to get wrapped up in it.

“From the very beginning we wanted to create a story that people would want to dive deeper and deeper into and that never stops feeling alive,” says Robays.

This meant building a game where clever puzzles and intriguing story combined in a natural way to build a town that felt lived in, and a crime that players felt compelled to solve.

One of the ways Robays and his team attempted to achieve this was laying out the logistics of Jericho—a town that doesn’t actually exist but is based in reality. Crimibox’s graphic designer crafted an interactive map of Jericho with a hand-drawn aesthetic.

Just like everything else in the game, the map has function. When things happen, it has to make sense within the confines of the carefully laid out world. As Robays put it, if two characters were to interact in secret, you should be able to see on the map whether or not somebody might have been able to eavesdrop.

Players are meant to use this, along with other alternate reality aids like social media posts, websites and text messages to find clues and otherwise navigate the game. Pictures and videos using live action actors are also used to help with immersion.

One of the most important things to remember when making a complex game like this is ensuring the player doesn’t get stuck for too long or feel like they have no way of progressing. So the team encourages the use of the game’s Facebook page, where there are currently over 500 members, including some of the game’s creators. Since people find ease or difficulty in different things, the page is meant for players to come together and share information on various aspects of the case, just like real detectives would.

For those that don’t want to go that route, the developers included a hint feature directly within the game as well. Robays says they never want people to feel like they are helpless, especially if something wasn’t as apparent as the team thought it might be.

“It shouldn’t be like ‘oh I said that one thing three chapters ago, do you remember? Well, you should have written it down because if you didn’t you’re going to be stuck,’” says Robays.

At a small company like Crimibox, it takes all hands on deck to flesh out an experience like “Missing in Jericho.” While the developers have no concrete plans for their next release just yet, Robays said that he would like to see some of Crimibox’s previous works translated into English.

Whatever comes next, it is probably safe to keep your magnifying glasses at the ready.

Missing in Jericho is available for purchase now at MissinginJericho.com.