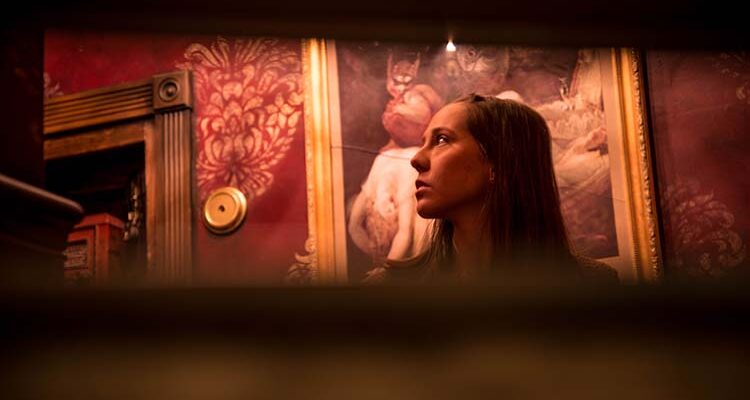 Straight out of William Castle’s House on Haunted Hill, a small group of both friends and strangers walked into Cross Roads Escape Games in Anaheim not really knowing what to expect.

The six of us would form a team of horror movie cliches (geek, virgin, jock, rebel, prom queen and detective) that would unwittingly end up trapped by the hands of a madman. Would we make it out alive?

Though we all knew we were there for fun, there was an undercurrent of anxiety among us. (OK, what did we get ourselves into?) Well, at least there wasn’t a shady Vincent Price character with an ulterior motive.

As we grilled the staff for details, we learned we’d be separated for the 60-minute game, but would be working together to get out alive. The key would be paying close attention to the clues and solving the puzzles.

Waiting to start the game, we marveled at the design detail put into the 3,000-square-foot-plus area owners Madison and Luke Rhoades now call headquarters for Cross Roads. There was a fair share of blood, sweat and tears the creative couple put into this labor of love. Cross Roads, which opens Jan. 15 with the horror-themed Hex Room game, was actually supposed to open several months earlier but got postponed due to delays in the city permitting process.

“Our goal is to become the Disneyland of escape games, and I am sure Walt had a few setbacks too,” says Madison.

All the time and effort was well worth it because Cross Roads exceeded all our expectations – even the most reluctant of us – and some of us had pretty high expectations. Honestly, I’ve never in all my life had so much fun thinking so hard. My advice? Drink some green tea and do some brain games before you go – your life will depend on it.

Want to get into the mind of one of the Cross Roads creators? Madison, the creative director, took time from building sets and making puzzles to answer some of our pressing questions:

What are your backgrounds?
We met in our high school drama class and went on to both study theater in college. Luke got a degree in theater from Vanguard University of Southern California and became the master carpenter at The American Academy of Dramatic Arts. I went to USC and got a degree in fine arts and theater arts. After college, I did set design and scenic painting for a bunch of different theaters in LA. I did the scenic painting and even acted in Haunted Play’s Delusion in 2011, 2012 and 2013. I always played the creepy little girl, my biggest part being Julia in 2012. In 2013 I got my dream job as the lead scenic painter for The Queen Mary’s Dark Harbor and am currently going on my third year there.

What is an escape game?
And escape room/escape game is an interactive adventure where you and a group of friends or strangers are locked in a room with keys, puzzles and clues. The goal is to try to escape the room in a limited amount of time, usually one hour. The earliest escape games emerged in Hong Kong in 2006. It is rumored that the original idea was inspired by the works of Agatha Christie. Since then, escape rooms have grown in popularity, reaching the UK in 2010 and America in 2013.

Why did you decide to create an escape game?
We loved escape rooms after going to our first one last October [2014]. Since then, we have been to a total of 25. Even though we loved escape rooms so much, we always came out saying what could have been better. And after a while, they all started to seem so similar. That is when we decided, we have the skills and the background, why not try to make the next level of escape rooms? So we did. We poured our entire life savings into Cross Roads, and I think the production value and unique experiences really shows how much work we have put into it.

How does your escape game stand out from the crowd?
First, let me explain what an average escape room is like: Usually it takes place in a small office building, and the players get to explore one to two rooms at the most. Although the puzzles are usually clever, rarely does the atmosphere of the room go beyond a basic office. These escape rooms work in a linear fashion where you solve a combination code, open a lock, find a puzzle, solve a combination code, open a lock, etc.

Here is what we do different: Cross Roads is an escape game, not an escape room. Our experience is much more game-like, and players will get to explore up to six different rooms! We have realistic custom-built sets that fully immerse its players into the atmosphere and storyline. For our Hex Room game, players will not only have to escape, but also survive the game, giving each player a unique experience, and an important job to help their team escape.

What is the level of difficulty guests can expect from your escape game?
Our games will range in difficulty. Our Hex Room game, which is our horror-themed game we will be opening with, will be pretty hard. But, we are in the process of working on other games, like our Fun House game, that will be much easier and better for beginners. A good example of how our games are harder and different from others is our Hex Room game. The story behind this game is there is a murderous horror movie fan who wants to watch you and your friends try to survive a horror movie. Each player will take a quiz before the game to find out which stereotypical horror movie character they are: the geek, virgin, jock, rebel, prom queen or detective. Your team of six will be divided up into separate rooms where you will be trapped alone. In this room you will find keys and clues that your other teammates will need in order to escape and must be passed to them though mail slots in the door. So not only are you working on getting yourself out of this room, you also have to be helping your teammates as well … but though a locked door. We also have a new added twist that each player will have a survival puzzle [they] have a choice to complete, if they have time, which will determine if they live or die in the game.

Are the clues switched up each time so that someone can come back again and not figure it all out easily?
The great thing about The Hex Room is that you can play it up to six times, each as a different character. Say you played your first time as the geek, and you didn’t escape, you can come back and ask to play as, for example, the jock, and have a completely new experience. Some players might also escape, but not survive, and would want to come back and try it again to see if they can beat the game and live. We are also the only escape room (that we know of) that gives prizes if you escape. We also will be giving away special “I Survived Cross Roads Escape Games” T-shirts for those who are able to make it out of The Hex Room alive.

Describe your venue.
Our building is amazing. It is over 3,000 square feet, which makes it one of the largest escape rooms in California. Most escape rooms have games that are in a little 10-foot by 10-foot room, but our games are well over 600 square feet per game. We have a beautiful main street view (no more sketchy escape rooms hidden in back alleys), and a two-story building with a backyard. Both of which we hope to make use of in games coming soon.

There are no actors in your escape game, correct? How do you up the horror aspect without live talent?
That is correct, no actors. In our games, YOU are the characters and it is up to you how you play the game. The horror aspect is mostly done through atmosphere. Players will be in a very small, dim, creepy room … alone. There will also be elements of the game that causes the players to put themselves in “uncomfortable” positions. I think a great horror movie is not one that has a bunch of jump-out scares, but ones that have disturbing imagery, suspense and make you feel uneasy. This is the kind of terror we are going for. It’s the difference between having to put your hand down a toilet (which is disgusting) or putting your hand down a garbage disposal. We are the latter.

DETAILS
Want to experience the puzzle for yourself? Cross Roads officially opens Jan. 15. Tickets are now on sale for The Hex Room game, with another game, The Fun House, opening in February. crossroadsescapegames.com

GIVEAWAY
Enter to win two free tickets for The Hex Room Game at Cross Roads Escape Games in Anaheim. The game requires six players, so you must purchase the additional four tickets at $32 each.