‘Lights Out’ Brings Terrifying Horror Short Back in Feature Length 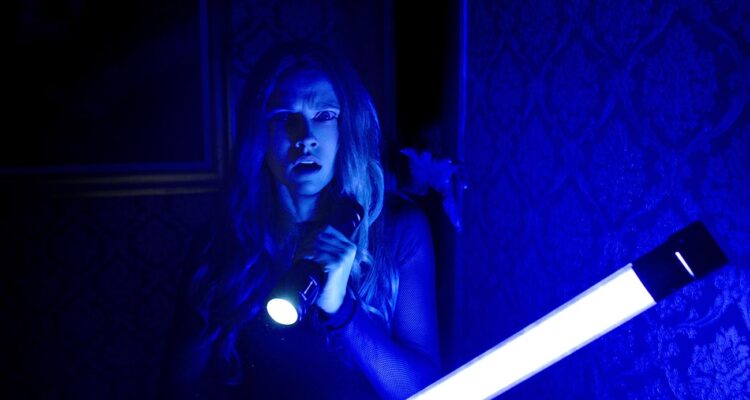 It’s a basic, innate fear most of us have had (and some of us still have). Not necessarily rational or explainable – but powerful nonetheless.

“To me, the dark encapsulates our greatest fears: When we are in the dark we cannot see, control or predict what we might face,” says Chapman University Professor of Sociology Christopher D. Bader, who is part of the team working on The Chapman University Survey of American Fears. He adds that survey results have shown that fears that rank highly tend to involve situations people find unpredictable (such as terrorist attacks and natural disasters) and those out of people’s control or understanding (such as crime and technology). “As such, darkness groups together many of our most primal fears.”

Lights Out, Director David F. Sandberg’s feature film debut, capitalizes on that fear with the precision of a fine scalpel. Fans of Sandberg’s horror shorts will recognize the title from his recent short of the same name that exploded on social media.

The basic premise of the short and the film are the same: There’s a real monster lurking when the lights go out.

The film expands on that basic goosebump-inducing premise so effectively accomplished in the less than 3-minute short and adds a well-developed storyline about a family tormented by this very real fear.

Starring Teresa Palmer as a young woman (Rebecca) with some demons – literally – in her past that she has tried hard to forget and run from, the film follows as she is drawn back to her dysfunctional family dynamic. Her mother, Sophie (played by Maria Bello), is having what Rebecca feels is a mental break, but her younger brother, Martin (Gabriel Bateman), knows the truth is far more horrifying.

The film does a great job of striking the same chord of terror Sandberg so expertly created in the short – only you get an hour and 21 minutes of it. Because the characters are well thought-through and effectively carried out by the actors, you really want them to survive.

In a day and age when horror films are made in droves (and we’re not complaining), it’s often hard for a horror flick to set itself apart. While Lights Out isn’t always 100 percent original in its scare tactics, it still does a great job at catching the viewer off guard and eliciting a healthy amount of hair-raising on the back of the neck.

What Sandberg accomplishes so well in the short – that thing lurking in the dark that makes you want to madly run as far away as you can get – is very much alive in this film.

And fans of Sandberg’s short films will be pleased to see Sandberg’s wife, Lotta Losten, return for an appearance in this feature version of the short.

Whatever you think lurks in the dark … this is worse.

Enter for a chance to win a free prize pack from the Lights Out movie. Must be at least 18 and residing in the U.S. College students, movie buffs, horror fans, all welcome to enter.