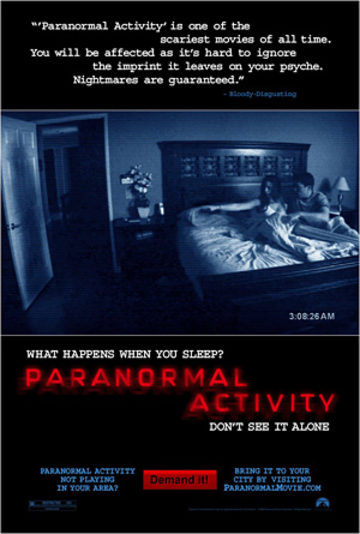 I’m sure I’m not alone amongst my fellow horror genre fans when I say that it takes a lot to scare me. You see enough ghosts, decomposing flesh, blood and men chasing someone with a knife or chainsaw – on the big screen, of course – and the feeling is more one of giggly exuberance rather than outright fear. That’s been my experience anyway.

Well, until … that first Paranormal Activity.

I actually didn’t know much about the film when it first came out and went to see it without any real expectations other than looking forward to seeing a horror movie.

And I’m not ashamed to admit it: It. Freaked. Me. Out.

Yeah, Ms. Heart of Stone, the one who monsters rarely get a rise from in haunt mazes and loves to watch horror movies alone at night, I was scared. Though oddly, it didn’t happen in the theater. Yes, it was definitely creepy in the theater and was a great film. But the real terror came when I went to sleep at night…

On the unfortunate nights that I’d wake up for some reason or another, I stayed up. I would start remembering the film – how it was set in a bedroom much like mine, with regular people not that different from me and my friends.

And how creepy little things started happening in that dark bedroom at night. Things that at some point in my thought process I was certain would begin to happen in my own bedroom.

In my life of horror movie viewing, I may have seen a movie along the way that would creep me out a little and come up again if I awoke later that night – momentarily.

Not for hours, or weeks. OK, months. Yeah.

The only thing that would comfort me back to sleep was my black cat, Derby, who I would call over and pet urgently until I could reach some kind of restless slumber. He found it all quite ridiculous, but placated me.

Eventually, I’m not sure why, I got over it. And in fact, went on a Paranormal Activity viewing spree so that I’ve lost count as to how many times I’ve seen it. And I’ve seen every other of the films in the series, excluding this final one, Paranormal Activity: The Ghost Dimension. While I’ve enjoyed the other films, my reaction has been closer to the usual exuberance without any late-night fallout.

I think the original film struck a nerve with me – and many, many others – because it really scaled things back from the usual splashiness of big, bloody, gory scenes and overstimulating hordes of monsters.

Don’t get me wrong: I love these kinds of horror movies as well. But in a time when these movies abounded, Paranormal Activity came in and seriously underplayed with very accessible characters caught in a situation that all of us can relate to: being scared at night in our rooms.

So, yes, Paranormal Activity got me. And I consider it one of my favorite movies of all time.

As the latest, and what is supposed to be the final film in the Paranormal Activity series, The Ghost Dimension hits theaters Oct. 23, I think back on the sleepless nights and laugh, wondering if another film in my generation will ever affect me the way that one did. I sure hope so.