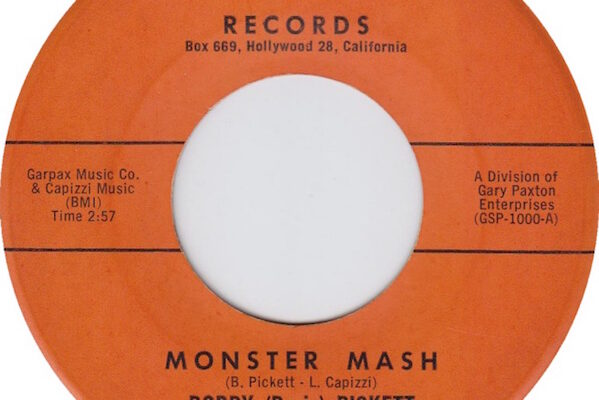 Probably the most famous Halloween pop song "Monster Mash" turns 55 in 2017 and hit number one on the U.S. charts for two weeks during the Cuban missile crisis in Oct. 1963.

If you were born in the 1950s or 1960s, “Monster Mash” was probably the first Halloween-themed song you ever heard.

The song was so popular and ahead of its time, it was probably the only Halloween song most people even knew until the late 1970s or 1980s. And 55 years ago this month, the song hit number one.

The novelty tune, written by Bobby Pickett – who performs the Boris Karloff imitation on the recording – and Leonard Capizzi, was part of an entire album of Halloween-themed pop music brought to life by legendary pop producer Gary Paxton, and released in august of 1962. The song slowly climbed the charts until it hit number one during the same two-week period of the Cuban missile crisis. Since then, the song has become a classic and Halloween standard.

, about the making of the classic song.

Halloween Every Night: First, what was it like to put together an album of novelty songs like this? Was this a lot of fun for the people involved or was it kind of cynically put together to make a buck? I mean, did Paxton ever look at his work like that?

AP: Every musician I have spoken to who worked with Gary Paxton during his Hollywood “golden era” has spoken in awe of his abilities as a writer, producer, engineer, arranger, composer and singer, with the word “genius” bandied about frequently but never lightly. There seems to have been a real camaraderie amongst the players, at least – and yes I’m sure everyone had fun – with someone as off the wall as Paxton, that was inevitable. Every day brought a new crazy idea or scheme that could be translated into a (potential) hit record. The rest of the Hollywood record biz establishment couldn’t fathom Paxton – but they understood that he could make records that would connect, so had a grudging respect for his ability to translate his crazed brainstorms into commercial entities.

HEN: And with the 1960s kind of factory approach to record making, how long did it take for them to put together an entire album of novelty songs?

AP: Very quickly. It would not be unusual to cut the basic tracks for an album of this sort in the course of a couple of sessions, add the vocals and sound effects at another, and have a completed album shortly thereafter. The industry worked at a much faster rate in those days – principally because there was not much longevity expected of records, particularly those in the novelty arena.

HEN: How did they put together the sound effects for “Monster Mash”?

AP: Gary himself put it best to me:

“It took about eight hours to do that intro and put it all together, because we looked through all sorts of sound effects records, but everything we got was distorted or hissy, just awful. So we got a ratchet wrench, we got a hair dryer, a glass of water with a straw, a guitar string with a pick, an electric razor. We did all these things, and then I got all the musicians around and I said OK I’m gonna conduct, on one you’re gonna blow in the thing, on two you’re gonna play the electric razor etc. I had Billy Lee Riley doing the scrape on the guitar string, that’s how we got the coffin creak – we tried to record doors all over the studio, nothing would work.”

HEN: Besides Bobby Pickett, who was an aspiring actor, the great Leon Russell played keyboards on it. Did the sessions really benefit from his talents or was he just a hired hand? And I read he arrived late for the session, so did Russell actually play on “Monster Mash”?

AP: Russell was supposed to play on it, but was late and so Gary told me he was the keyboardist. Don’t forget, at this time Russell was strictly a session player and would have been following Gary’s instruction anyway. Gary was famous for knowing exactly what he wanted and was unafraid to ask for it – when producing the Four Freshmen for example, he famously went out onto the studio floor and showed these pros how he wanted them to sing.

HEN: Also, is it true that Ventures drummer Mel Taylor played on “Monster Mash” or other songs on the album?

AP: No. The drummer on all those sessions was the great Jesse Sailes. Although they worked briefly together when the Ventures were the Marksmen, Taylor was never involved with Paxton in Hollywood as far as I know.

HEN: Was Paxton or Pickett actually surprised by the song’s success? Did its two-week run at number one during the Cuban missile crisis affect their feelings?

AP: I don’t believe that Gary was particularly surprised – don’t forget this was only a year or so after “Alley Oop,” so he had full confidence in his abilities. Also, he worked the record as much as he could on his own before it started to take off. The advantage he had of course was that Garpax was nationally-distributed so once it caught fire, “Monster Mash” would be available in the shops – not always a given for a indie release in those days. I don’t think current events would have had much effect on what Gary at least was up to – the studio was his life at that moment, workaholic doesn’t even begin to describe the Paxton of 1962.

HEN: Considering that it’s probably the most successful Halloween song ever, how did Paxton and Pickett think about it decades later?

AP: Pickett told me that for years he considered it a “millstone” when he was trying to find work as an actor, but I think he was proud of its longevity.  Gary was always proud of it, and its regular yearly income something he always appreciated.

HEN: I’ve never heard the whole album, but in your view, how does it hold up as a comedy record, a pop record or Halloween record?

AP: It’s goofy, to be sure, but surprisingly durable, even if some of the tunes are – typical of Paxton – take-offs on the dance fads of the time. Don’t forget “Monster Mash” was a hit all over again in the UK in 1973, and the album was even reissued there at that time. It can’t be faulted on a production level, it just depends how comfortable you are of Gary’s special brand of lunacy.