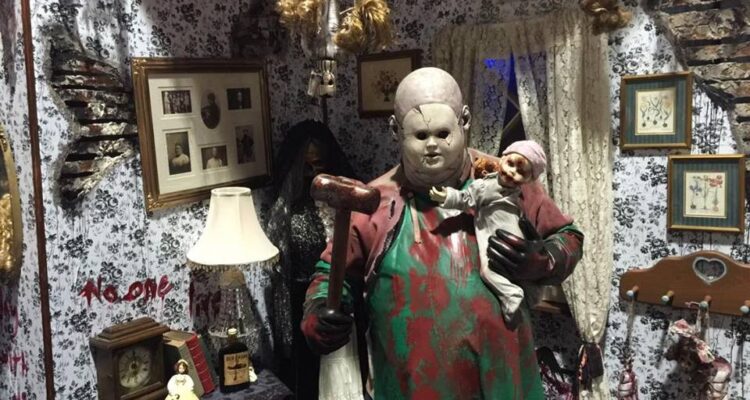 For those of us that cherish the Halloween season, it is our lament that it comes but once a year. There is the hallowed day that we anticipate. The few preceding weeks as we prepare for it. And then the season is passed, not to return for another 11 months.

Unless you happen to be Chris Hannan, who manages to live out the Halloween season nearly every day of the year under the guises of its most distinctive creatures.

A hair colorist by trade, Hannan’s true passion lies in the elaborately monstrous costumes that he designs and models at every available opportunity. A regular at many a convention, he is also a scare actor at the Thousand Oaks-based Reign of Terror Haunted House, a poet, a drummer and recently-turned horror score producer.

We had the chance to speak with Hannan about his lifestyle, and how it all began.

“I’ve never been anything but scary,” says Hannan. “I saw Frankenstein when I was 4, somehow. I thought he was cool; I called him ‘Frankie.’ I remember my dad told me a story from around that time when I had chased the local girls around, groaning like Frankenstein.

“Now I’m in costume twice a month, at least,” he says, and his proclivity for his horror masquerades has earned him something of a reputation at the conventions he frequents. “At a convention, I don’t just bring one costume. I’ll go through maybe two or three costume changes a day. I feel naked when I’m not in costume at a convention.

“People have started to recognize me more when I’m in costume than when I’m out. If someone catches me between costumes, they’ll act real confused. They’re so used to seeing me in costume, any costume, that they just expect me to always be in costume.”

While maintaining his appearances at conventions and costume parties, Hannan has also taken up the art of composing his own macabre music. “I’ve been a drummer my entire life, but I’ve always had a natural knack to bang away on a piano. I figured out how to play the themes to Halloween, The Exorcist; I’ve always wanted the opportunity to score a horror movie soundtrack. I’ve taken a break from drumming to learn more about music.”

Hannan’s studies have resulted in four ambient instrumental compilations under the production title of Melodies of the Macabre. Each album narrates the moods of things that are iconically horror, whether they are set in ghastly locales such as cemeteries or haunted carnivals, or follow the passions of vampires, or take the listener on a tour through the ominous catacombs of Paris.

Hannan’s albums are available in digital format on cdbaby under Melodies of the Macabre, and will be available on CD very soon. He will also be doing an in-store signing at Dark Delicacies in Burbank, California on Sept. 24 from 4 p.m. to 5:30 p.m.