128 Years After his Birth, H.P. Lovecraft is Reanimating in Pop Culture 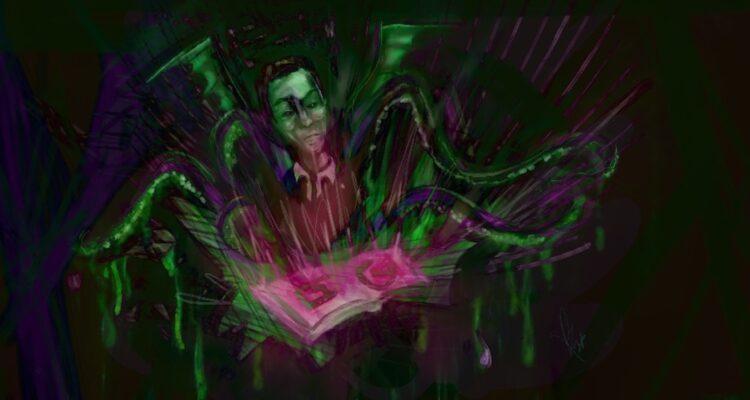 The works of writer H.P. Lovecraft have been making a comeback recently. Illustration by Bloody Mari

The Cthulhu is trending. Its tentacled images are creeping onto new lines of T-shirts, posters, and graphic novels, and is being referenced anew in movies, mazes, and lots of unexpected places. Author H.P. Lovecraft is making a big comeback decades after he died in poverty.

While the reasons for the resurgence are not yet obvious, Lovecraft fans should be enjoying having more chances to see their favorite works revered and merchandised.

Halloween Every Night spoke with Andrew Leman at the Glendale Lovecraft Historical Society about the author, his work and what could end up the beginning of Lovecraftmania.

Halloween Every Night: As a historical society, is it your job to simply preserve the works or add to them as well?

Andrew Leman: We are a society of numerous members. We’ve produced our own set of adaptations of Lovecraft. Our members are always looking for ways to play on our imaginations while exploring our fears. We pride ourselves in the creation of two motion pictures, radio adaptations, as well as super realistic prop games all set in the 1920’s. Like a roleplaying game, players are thrust into adventures where fantasy is replaced with mystery and the lore embodied in the world coerces the players to continue. It’s a lot of fun to imagine such a vast and populated romantic universe, so we try to be as limitless as possible to make all our products completely immersive to a player or viewer.

Our production of The Call of Cthulhu is, so far, the largest adaptation of any Lovecraft story ever. We made the motion picture in 2005 but shot it as if it was made in the 1920’s — a silent, dark horror that runs chills. The radio series comes with prop documents to help to set up the lore. Most are adaptations of Lovecraft stories,.

HEN:  Have you had an increase in membership recently and can you attribute that to any recent trends?

AL: Our membership spans multiple countries with hundreds of people all interacting. Recently though, we’ve had balanced activity between getting new members and hearing from old ones. A lot of people hear about us and are surprised to hear that we even exist. Lots of members come out the woodwork to support the writing and cultural passion they want to be a part of.

HEN: What is it about Lovecraft that is different from others in the genre? Is there something about the fear of the unknown that really scares us?

AL: Lovecraft is definitely different from the formulaic horror because he writes in his own way. He was very interested in big ideas and lots of atmosphere surrounding his plot. He was not very into developing the humans that were in his stories. He liked to remind the reader that human beings are a speck in this much larger and uncaring universe. The time period in which he wrote in is removed from today, darker in some ways and more innocent in others. Humanity hadn’t quite explored everything and there was still a lot left, well unknown.When reread in story form, we can see how it feels to be fearful of this great big world.

HEN: How is the writing of Lovecraft different from the forms of horror writing we see today in movies and books? Do audiences want to see a rise in this style of mythic writing?

AL: Lovecraft acknowledged himself that his work is not for everybody. There will always be those who adore him and those who don’t really get him. He died believing he was a failure. Poor, and with a lot of unpublished works. But since then he has become world famous and all of his works are studied for their effects on literature. His ideas have been shared among others and have become a spotlight among culture of the 1920’s. A lot of people have seen Cthulhu but people don’t even recognize who the man is behind the mascot. The continuous exposure in modern media and the fact that he is still around today will keep him relevant. I don’t think it will ever be ‘mainstream’ as most fans are attracted to the niche-ness of the genre. Fans would however love to see an adaptation on the big screen.

HEN: What should any new reader to the sub-genre firstly know about the greater Lovecraftian universe?

AL: For people who are just being introduced, his style is very much his own and he doesn’t try to make it easy, but rewards a reader for their effort. I thought some stories were terrible when I first read them but now I see them in a whole new light. He isn’t always going for what the reader expects, but writes for a bigger picture. If you can get over some of his flaws then you can see he didn’t just want to write the best selling novel, but create a universe he found interesting and curious to pursue.

HEN: I know you mostly deal with the happenings of the past, but where do you see the future of Lovecraft horror going?

AL: As his fame continues to spread, Lovecraft is becoming more and more cemented into common culture. People will drop his name and before, people would say ‘who are you talking about,’ but now he is well known. With tools and special effects becoming more advanced there is new potential for smaller studios and movie makers to make films that do the original writings justice.

There is such high profile usage of his imagery and style we keep seeing in modern art and literature today. One of our favorite games on our Facebook page happens to be Is it Lovecraftian? — and no, just because it has tentacles doesn’t make it so — where we examine the different elements used in pieces that tie it to the genre. What is it that makes it Lovecraftian? Some of the great movies that are described as Lovecraftian are The Thing and Alien because they see humanity as a rather insignificant part of a bigger world. Over the years it’s certainly defined its own unique sub-genre and some fans are still chasing that perfect Lovecraft adaptation.

HEN: Are there any modern followers of Cthulhu? Those that believe Lovecraft’s works to be non-fiction?

AL: Short answer, there are. But it’s hard to tell how sincere they are. They like to claim that Lovecraft was onto something and believe that the elder gods exist, but to what extent they are tied to it is a mystery. Some are very opinionated about any new form of adaptations, but they still do their part in keeping the community alive and analyzing all of Lovecraft.

This is most likely because his world he created was full of such real detail. Everywhere there were hints and details relating to actual people and events in history. Not only that, he was interested in the world. Some of his writings predicted scientific discoveries such as ancient creatures buried in ice in the story At the Mountains of Madness. It’s so grounded in a historical sense that people can take it and run and with it.

AL: Probably The Call of Cthulhu, as it serves as a major jumping off point for his writing style. However, purely as a piece of writing, The Colour Out of Space is so imaginative and detailed, I would recommend it to any new reader.