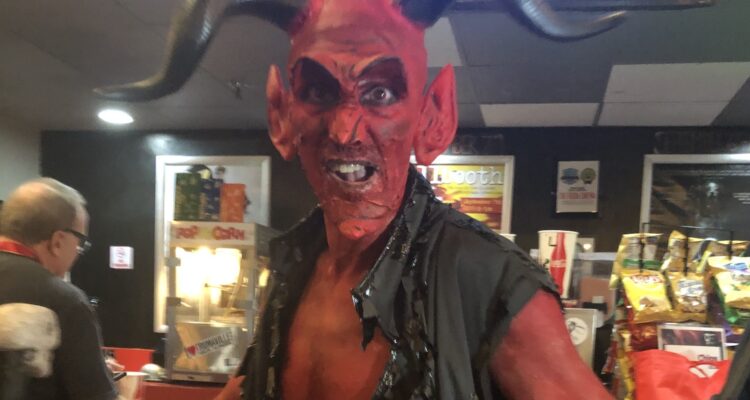 It was a big big weekend for this guy and his minions, as demons ran amuck at the 2019 Horrible Imaginings Film Festival at the Frida Cinema in Santa Ana, Calif. Photo by Jessica Peralta.

The closing night of the 2019 Horrible Imaginings Film Festival featured two films about the demonic bleed over of film into reality. And as it completed its first decade, the fest was a reminder of how much the horror genre has expanded, yet how much it still reflects our anxieties.

“Keep in mind we were able to show this weekend six percent of what was submitted to us,” fest founder and director Miguel Fernandez told the closing night audience, emphasizing how many choices the judges had to make. “We try to run the gamut.”

Antrum: The Deadliest Film Ever Made, was also the most mysterious of the fest. Though not Blair Witch Project found footage horror, the cursed-film-within-a-film faux documentary is ultimately cut from the same cloth. Taking home the awards for Best Feature, Best Cinematography, Best Screenplay and Best Actor, it was a film that stirred the most conversation.

Wally and His Hideously Malformed Wart earned 22-year-old animator Max Johnson the Best Animated Short award. Best Director in a Short went to Emily Bennett for LVRS, also a much buzzed about film on a woman choosing to stay in an abusive relationship.

Much of the morning and afternoon, audiences enthusiastically responded to a series of fantasy and sci-fi-based horror shorts including Zombies and Indians, an examination of tribal identity during a zombie apocalypse.

“I wanted to see a story from our perspective and how we would be in those situations, because I rarely ever see that in mainstream media,” said director Keith Lawrence during the Q&A session. “It was originally going to be a pilot for a series, but what we were able to do was develop and get financing for a short. This was where it grew out of.”

Rodriguez reflected positively over the ten-year history of his festival, which began in San Diego before moving to the Frida Cinema in Santa Ana, Calif. in 2018, describing it as a “really smart decision” and laid out where he’d like to go over the next ten years.

“I would like us to continue our trajectory that we have painstakingly tried to put in place,” he said. “Which is to have a community where everybody gets together and experiences these stories of anxiety and fear and vulnerability together. To realize we all have these emotions in common. I want the audience and filmmaker and creator to have these conversations together because they are both so critical to each other.”

Best Score in a Short: What Daphne Saw

Best Score in a Feature: Reborn

Best Cinematography in a Short: The Blizzard

Best Cinematography in a Feature: Antrum

Best Screenplay in a Short: How To Be Alone

Best Screenplay in a Feature: Antrum

Best Actress in a Short: Asuka Kurosawa/Saori, Piling Up

Best Feature: Antrum: The Deadliest Film Ever Made

Andre Leon contributed to this story.