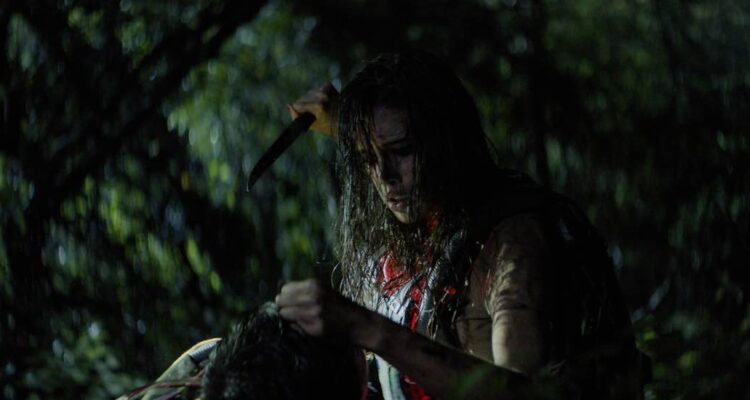 Triggered is a 2020 South African horror-thriller following nine friends with a dark secret as they camp in the woods. After a night of partying, the friends wake up with suicide bombs strapped to their chests, all with varying times on their countdown clocks. So they must work together to get out of this life-and-death situation. But it doesn’t take long for this horrifying scenario to descend into a bloody battle royal.

The film showcases a dramatic and emotional heart not found in most battle royal horror films. It features atypical characters, like Erin, who starts the movie as your garden-variety introvert, but quickly evolves into something fresh and new.

The character of Erin, played by Liesl Ahlers, is one of the standouts of the film — one that the South African actress found compelling.

”I felt I needed to play the character because I felt like I could be a voice for the people that always feel that they are typecast as the boring, quiet, introverted … loser,” she said. “I felt like I needed to show that [Erin] had more sides to her.”

And she also really wanted to be strapped to a suicide bomb vest — as an actress, of course. She said she enjoys working on horror projects because they provide an excellent opportunity to show dramatic depth.

“I thought [Triggered] was such a cool concept, and I love life-and-death scenarios in [horror movies],” she said.

The cast and crew of Triggered, like its characters, had to overcome and fight against the odds. It’s no secret to anyone involved with the film industry that independent films often face uphill battles. They can struggle for release on widespread platforms as well as in attracting stars to sign on to their projects. Director Alastair Orr shed light on some of the struggles their film faced — including a micro-budget that forced the cast and crew to scramble to film the project in under three weeks.

Orr, like the majority of the cast and crew, hails from South Africa. The producer, writer, editor and director has experience in feature film and short film directing, with his 2016 horror film House on Willow Street receiving critical praise at the London FrightFest Film Festival. With his experience both inside and outside the Hollywood studio system, Orr sought to make a film himself, finding that the studio system stifled creativity. More specifically, he wanted to make a film with South Africans, by South Africans.

“A lot of post-production work [in Hollywood] is done in South Africa,” he said. “My previous project, House on Willow Street, got external investment and came with a lot of strings attached … people paying the bills telling you how to do things, or expectations on the script.”

This lead Orr and his crew to embark on a journey through the independent film landscape. Financial control over his films is what Orr sought the most.

The film was able to attract a big name like Sean Cameron Michael, mainly because it was so unique. Michael is regarded as one of Africa’s most successful exports to Hollywood, with a professional career spanning over three decades that showcases leading and supporting roles in over one hundred television and film productions.

Besides his regional ties to the film, Michael said he found the script to be equally fun and terrifying.

”When [Orr] approached me with the script for Triggered, I loved how it was an ensemble piece,” he said. “And I really loved the script. It was fun, had terror, and was set in a battle royal genre that I just find fun.”

Michael also shed some light on the kinds of projects he chooses.

“I don’t limit myself to [studio projects],” he said. “I like to work on short films, feature films, experimental films. … [On independent film sets,] you don’t have a trailer … or a lot of money. … You have 10 to 14 days to do the best work that you can do. That is really fun.”

“Fantasy and horror are definitely my preferred watching genres,” she said. “I think it’s important for me to work on things that I love watching and am passionate about … that is why the last couple of years I have been working on films like that.

“It’s fun to make a horror [movie] — behind the scenes it’s all fun and games. But also, watching horror takes you away from reality. It makes you forget reality and brings you into a whole different world.”

Triggered is now available On Demand and Digital.