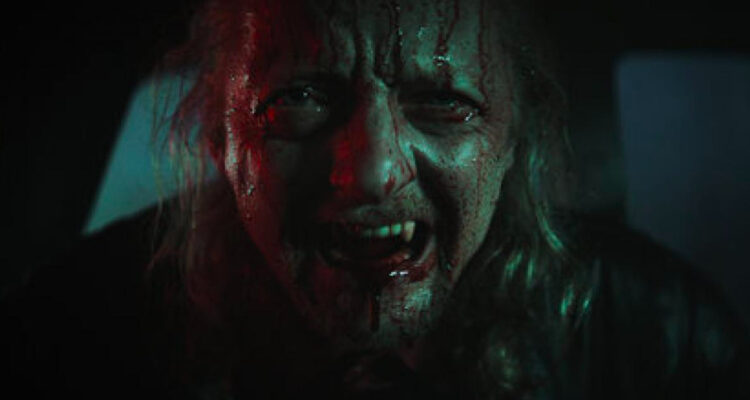 Like many events in 2020, the annual Screamfest LA Horror Film Festival took to a drive-in format for the Halloween season.

In its 20th year, the festival continued on with a lineup over 10 back-to-back nights, each showcasing a feature film paired with a number of shorts.

Here are some of the highlights:

Jack the handyman (Macleod Andrews) is sent to prepare a house for the next round of tenants after yet another broken lease. He’s forced to stay there alone during repairs, and to him, the initial signs of a haunting — doorbells that keep ringing, the toilet that makes odd noises, doors that open and slam on their own — just seem like more for his to-do list. Meanwhile, house ghost Muriel (Natalie Walker) must scare Jack out or the Spectral Agency monitoring her case will remove her from the home she’s kept for the past two hundred years. Muriel’s haunting finally scares Jack out when she reveals herself — but after his initial fright, Jack becomes more curious than afraid, and a bond forms between the two. The focus of the film switches from traditional haunted house story into an examination of how a relationship between a lonely human and an equally lonely ghost can develop. This relationship is further complicated when the only way for her to keep her job is to scare him away, which would make him lose his job, and vice versa.

An Ideal Host takes an image-obsessed couple’s dinner party and twists it into a hilarious and heart-racing alien apocalypse. Liz (Nadia Collins) and Jackson (Evan Williams) meticulously plan their marriage proposal to best impress their old high school friends and their various plus-ones. The film is very self-aware of the couple’s incredibly fake and cringeworthy behavior, which creates a cheekily funny sense of dramatic irony — all the while building up the subtle undertone of unease and tension between domineering Jackson and desperate Liz.

Their plans start to go awry when Liz’s ex-best friend Daisy (Naomi Brockwell) — blacklisted for drunkenly disrupting the couple’s last dinner party — shows up uninvited. Then comes the great twist: One of the guests is the host of otherworldly parasites that transmit and infect through a kiss — which feels all too unsettlingly real in times of COVID-19. The characters established prior to the introduction of alien invaders react exactly how we expect, in delightful variations of panic and paranoia. An Ideal Host is thrilling and fun, with a good sense of humor balanced with increasing danger that keeps you on the edge of your seat over the whole film.

The Brain That Wouldn’t Die

Horror-comedy The Brain That Wouldn’t Die, directed by Derek Carl, follows a talented surgeon by the name of Dr. Bill Cortner.  Dr. Cortner and his fiancee, Jan Compton, get into a horrific car accident while traveling to meet up with Cortner’s assistant. Once realizing the aftermath of the accident, Dr. Cortner is in complete shock because his fiancee has been decapitated. It is up to Dr. Cortner to revive her severed head and he is desperate to find Jan a new body.

For fans that are unaware, this 2020 version of the film is an adaptation from the original that was released in 1962.  The 2020 remake demonstrates similarities to its predecessor by beginning the film with diagonal writing credits, along with the suspenseful music score from the original. However, unlike the remake, the original is quite serious. The movie is perceived as dark, intense, not making fun of itself like the remake. To this day, The Brain That Wouldn’t Die is still very much relevant and unexpectedly up-to-date when compared to similar classic films. This allows Carl to go along with the overall plot of the story, while adding new elements to attract viewers and appear more vibrant and colorful.

This adaptation’s goal was to acknowledge the movie’s silly plot, and create a lore that expands far more than the original. Presenting this film in the year 2020 offers fans a bit of nostalgia while spinning some heads with a rollercoaster ride of emotions.

Directed by Gaukur Ulfarrson, Thirst begins in an unknown small town where evil lingers around every corner. Some disturbing crimes and brutality frequently happen here. The main protagonist, Haluda, struggles to find her footing since she has nowhere to live, and is dealing with a drug addiction. Even worse, Haluda is brought in by police as the prime suspect in the death of her brother. There are several unique characters explored in the film. From the young woman struggling with drugs to an elderly woman believing the world is going to end without her religious rituals, and an old, homosexual vampire who only targets men. Thirst’s visual effects match the personalities of the characters. Any scene Haluda is in, for example, looks dark and depressing, as is the predicament she faces.

Sanzaru is an extremely slow-burning drama laced with horror that follows Evelyn, a Filipino caretaker whose past seems to haunt her every day. The woman she’s caring for, Dena, is plagued with dementia, which culminates in a series of unsettling events and uncomfortable conversations. It is important to note that while enjoyable, this film is a drama first and a horror film second. The “monsters” we see in this film are not in the usual form. Though it does give us some chills with the occasional message from beyond and the old man lurking in the shadows. As Evelyn fights for the ability to come clean about her past with her nephew, Amos, she’s also trying to find the secrets behind the mysterious Mr. Sanzaru. It is  an eerie and unsettling yet enjoyable experience to piece together the story of Mr. Sanzaru and his connection to Dena and Evelyn.

Sweet River combines a Poe-esque vibe with a whodunit approach to horror — which pays off spectacularly. We follow the story of Hanna, a woman from the city who needs to get to the bottom of her son’s murder and to finally find his body. This takes us into a series of events that deal with heartbreak, addiction, angry spirits and vengeance. The film fulfills every promise it offers. As we follow Hanna, we are introduced to the small Australian town’s dark past of a serial killer and a tragic bus crash. Each twist and turn keeps the viewer captivated. The other characters we meet are John Drake and his wife, Elenor, who are also still dealing with a painful past, as is the rest of the town. Yet it seems most of them have found an unsettling way of coping.

French independent filmmaker Baptiste Rouveure successfully delivers his 2020 film Anonymous Animals to audiences intrigued by mankind’s darkest flaws. Set in a moment in time assumed to be modern day, it reflects the unjust relationships humans have not only with animals, but with each other.

It centers around men with the heads of animals capturing everyday humans like us, only to treat them like hunted game and abused livestock. Even dog fights have a point to make in this modern take on animal cruelty. Rouveure is simplistic in his style, but poignant and clear in his message. At times, it’s like he asks us to look through the lens as if we were the scared animals — as if we didn’t know what was coming for us, beyond the sounds of grinding metal and footsteps. Not a word is spoken in the film, but don’t let that scare you. It’s what isn’t said that finds a way to frighten you. The sounds he uses in the film are subtly remarkable. Let your imagination wonder about what these creatures in the film are. The end delivers a surprising twist you almost need to watch twice to believe.