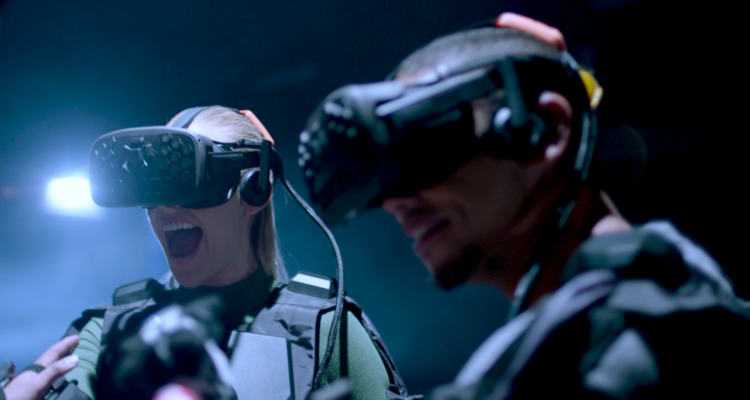 Players interact with their virtual reality experience of 'Terminator' VR at Spaces. The company's immersive interactive experience is based on 'Terminator Salvation.' Photo courtesy Spaces.

Lovers of The Terminator franchise are getting a new way to experience it: In virtual reality.

In air-conditioned shelter from the summer heat, fans can virtually fight Skynet with their virtual team, virtually any time at high-end VR center Spaces in Irvine and San Jose Calif, and Tokyo, Japan.

Based on Terminator Salvation, the multiplayer experience allows up to four players who are at least 10 years old to put on the VR headsets and backpacks and take on Skynet. Terminator: Dark Fate arrives in November, and fans can fill up on the VR experience while they wait for the movie. Tickets are $20-$30.

Halloween Every Night caught up with Spaces’ busy CEO and co-founder Shiraz Akmal, a former head of product development for virtual reality projects for DreamWorks Animation, to talk about the origins of his company, his new game and where he thinks VR is going.

Halloween Every Night: You had a pretty cool job before, what is so compelling about VR that you decided to start your own company?

Shiraz Akmal: I’ve had the entrepreneurial bug since I was a kid. I built video games based on movies from The Incredibles to Evil Dead. I’m a hard core technologist and when you get old enough, you get a chance to do a lot of different things. At Dream Works, we built experiences like visiting Santa Claus where you could visit the North Pole from your local mall. We married technology to these new experiences and when we reached a point where the market was bigger, Jeffrey [Katzenberg] gave us permission to begin Spaces at DreamWorks and eventually we spun it off with their blessing.

Dreamworks was the best place I ever worked, but there’s nothing like starting out on your own. It was big jump. A nine-month discussion but it aligned to lead us to the path. We wanted to be free to work with all kinds of different properties, ones we couldn’t do at DreamWorks, like Skydance Media.

HEN: What was the development process like for this experience? And do you consider this really a game or something else? What can players expect?

SA: It’s hard to describe. Every day we have new customers coming in and they’ve never played VR or played a lot, or they like to visit theme parks.

It’s you. You are the star, — we’re the only ones who scan your face. There’s physical props and it’s kind of an intersection of all three of those things. It’s something to do with your friends and family in the same space. We encourage people to play together and have a shared experience. There’s something about being in the proximity of another human being. I’m a huge video game player, but it’s fun to play and be with people you like, and this is a format we’ve created for that. It’s really a new format. It’s almost shocking, because they’ve never done anything like that. They look over and see their friend. It’s like you’re being reborn in this digital world that feels real.

HEN: This is a quickly evolving industry, what sets Spaces apart — or in particular, Terminator VR — apart from other VR?

SA: As an industry, it feels like it’s evolving faster than it really is, but we’re really focused on social group play in the same space. We focused on reasons to leave your house. We bring you and your friends into the experience so you can see each other in the experience. And we give you almost a home video of the experience . We’re working really hard to make it feel as real and memorable as possible.   Wind and water and physical things you can pick up. Suspension of disbelief. Here you can walk away with the belief that it all really happened

You could never build this at home. We’re pushing the boundaries of what’s possible, everything from the weapons we give you to the entire guest journey. it’s really fun.

HEN: You’ve said that this will be the “next category of theme parks.” What does that mean to the average video gamer or theme park visitor?

SA: I think our focus is on taking any arbitrary space and asking ourselves how do we create very social and emotional experiences that allow you to move through those spaces.

What are things you’ll never be able to do without virtual reality? What would that look like? We think there’s this large interactive place were guests could experience a variety of attractions.

All of that is possible today, and with Terminator you have a lot of different activities. There’s critical problem solving where you have to work together to defeat Skynet. It makes it that much more believable for the visitor. We’re at the tip of the iceberg of discovering what you can do. Ultimately we want you to be able to go anywhere and do anything.

HEN: Where does the company go from here? You must already be thinking about the next game/experience, any hints as to what’s next or where you’d like to go in the next few years?

SA: We have a number of experiences in production and we’ll be expanding  We’re introducing a Halloween-themed experience in a few days. It’s definitely cool, but we build major epic attractions, so we’re using Terminator to build customers expectations, versus having 10 experiences that are all kind of the same. There is so much that is possible.