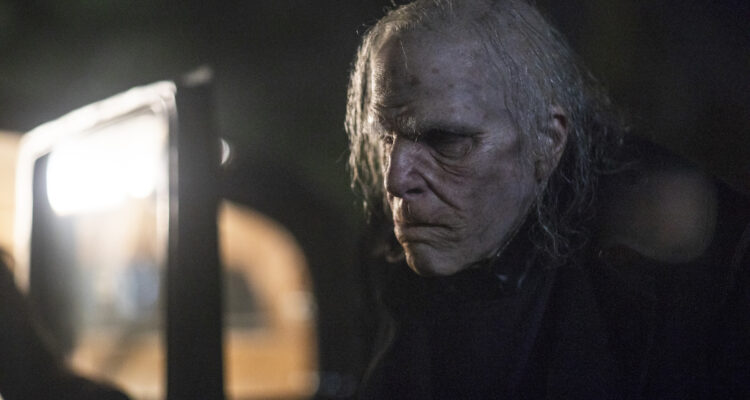 Two years ago, Jami O’Brien sent a script of her budding TV project to Joe Hill, author, and son of Stephen King. He loved it. Really loved it. And that meant a lot, because it was Hill’s book her project was based on.

It was an adrenaline shot into the usual Hollywood development process and a critical turning point. Because of it, NOS4A2 (or “Nosferatu,” get it?) is AMC’s newest series, premiering June 2.

“I thought it was the best single episode of anything I had like ever read in my life,” Hill says, sitting along side O’Brien at a table in a quiet room off the convention floor at April’s Wonder Con. “She has such a deft touch she reveals so much. I mean that. It’s not an ironic statement. After I read what she did, I wanted to be careful not to fuck it up.”

Hill’s 2013 critically-lauded novel spins a very different kind of vampire tale, one of a young women with special abilities trying to save children from a predator. AMC’s adaptation will be 10 episodes.

O’Brien explains she came from a place of loving Joe Hill’s book. “My process … and in the writer’s room, has always been how can we tell this story and get as much of the book actually into our show as we can?”

That includes how the story jumps around from different places and times. “It starts in the present but goes back to the past which is complicated for a television show,” explains O’Brien, “Especially if you’re trying to follow a main character like [Vic] McQueen.”

“Most of the deviations we made have been about showing more of the book. They have all been decisions about how to manage the title timelines and manage the characters in such a way that our actors can play them,” says O’Brien.

The story features a young woman named Victoria “Vic” McQueen who discovers she has the power to unlock portals that help her find lost objects. As Vic develops her usual gift, she finds that she encounters many other “inscape travelers.” Some are benevolent and some are abusive of their power. Vic encounters Charlie Manx, who is an immortal who feeds off the souls of children. McQueen thrives to defeat Manx and save his victims without becoming a victim herself.

Manx disposes what remains of the children to Christmasland. There, every day is Christmas and unhappiness has been abolished. The character doesn’t fit many clichés of villainy as author Joe Hill describes it.

“I kinda hate mustache-twirling villains. I do think in a weird twisted way, you could look at the decisions Charlie has made and see how he would view himself. In his mind, he is rescuing children from lives of suffering and unhappiness. As he takes them to Christmasland, he gradually drains all their hate and regret and sorrow and grief, all that comes out of them,” Hill says, “When Charlie is done with them there’s nothing left but happiness, innocence and teeth.

“I think we over idealize about innocence in our culture, cause an innocent child will rip the wings off a butterfly and laugh about it and have no idea that he’s causing another living creature to suffer. It’s our regrets, our sorrows, our guilt that makes us complete functioning human beings. If you can’t feel sorrow and regret, you know, you’re a sociopath. I think that Charlie has this vision of saving children and bringing them to a place of complete and never-ending happiness. From a certain point of view that does sound heroic, but when you get close to it actually it’s kinda monstrous.”

And O’Brien says Manx is not your typical vampire.

“Charlie Manx he’s a man, first and foremost, so he’s not actually a vampire in the way that we typically think about vampires. He doesn’t have pointy ears, he’s not non-human,” she says. He also isn’t threatened by garlic. “He can go out in the sun. So, anything that looks horrific about him really comes from being 135 years old.”

“Charlie’s biggest advantage is that he does have 135 years of experience. You know, he’s good at not getting caught! He’s good at getting away with things,” he says.

This new occult drama also has usual elements of horror that are not normally found in many horror films. Some horror films rely on jump scares for effect but, NOS4A2 is going at a different angle.

“I’m not above a good jump scare,” Hill says. “I think there’s plenty of room for that. But they are kind of cheap and weak. I mean if someone drops a stack of frying pans behind me, you go “OHHH UUHH!!!” But that’s not great horror, that’s just a loud noise. I think you get more mileage out of suspense. Suspense is about one thing. It’s about taking the character you care about and putting them out on a ledge. It is a lot more interesting than just someone walking down a dark hallway and the soundtrack goes ‘Bawhh!’

O’Brien agrees and says she and Hill wanted to translate the growing sense of dread permeating the novel into the series.

“Those are my favorite kinds of scares. The kind of tension of what is on the other side. Of what’s on the other end of the bridge? Where does this highway go? What’s waiting for Daniel when he gets out of the car?”

Hill’s support comes with the understanding that his book and O’Brien’s TV show are two different things.

Part of Hill’s enthusiasm comes from his novel actually not becoming a movie, but rather a series broadcast during what most critics describe as the golden age of television.

“I do think that we are living in this really remarkable period of television and genre television. On TV, you have 10 hours to fall in love with the character. You have so much more to explore,” He says. “Whereas in a movie, you have only got a few minutes to start to care about someone before you’ve moved on to another face. So, I kinda like that we have a little more room to breathe. I think that’s special.”