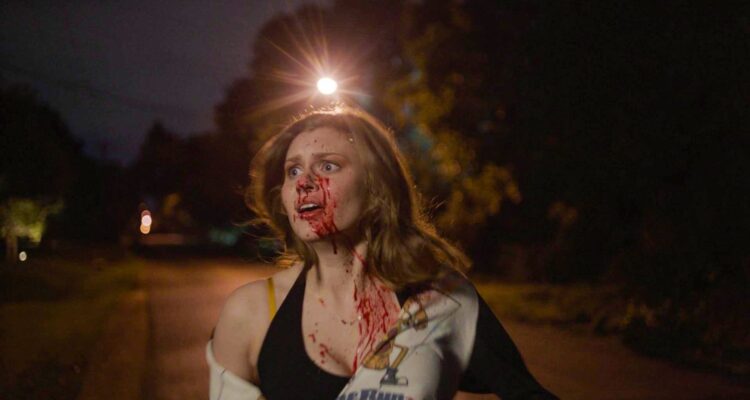 Having been made in the short time span of only eighteen days, Satanic Panic pulls off having iconic horror sequences while maintaining rib-splitting humor.

The film follows the adventure of a pizza delivery girl (Hayley Griffith) who stumbles upon a cult of Baphomet worshipers. From there, everything goes down hill as she’s taken prisoner to be used as a sacrifice. Several hilarious, heart-wrenching, and downright creepy twists and turns are taken with an ending that subverted expectations.

Ruby Modine co-stars and said that between fast days and the occasional slow days, there were even some spooky goings on during production. She and Griffith both experienced seeing a little girl in a hallway, followed by red marks appearing on Hayley’s side.

A lot happens during the single night that the movie takes place, and this was something Modine enjoyed about the filming. Having also been in Shameless, Central Park, and both Happy Death Day movies, she is no stranger to horror and drama. Not to mention, she’s been a fan of horror her entire life. Though, she didn’t set out to be a Scream Queen, and definitely plans to continue branching out into other genres of film and television. She feels her place in life is to be working on set, and has loved all of the projects she’s been a part of.

As a college student, she started with short films, which led to indies that brought her to stardom with Shameless and Happy Death Day. She said she just happened to be a part of some horror films and she seems to have found exactly where she’s happy. She plans to always have her feelers out for upcoming horror projects to be a part of and doesn’t see a point in her life that won’t have at least some spooky goings on while on following her dreams.

Modine has high hopes for audience reaction to Satanic Panic and that they get both the scares and humor the way she and the cast did.  She wants them “Scared out of their mind and laughing ’til their ribs hurt.”

Satanic Panic, directed by Chelsea Stardust and written by Ted Geoghegan and Grady Hendrix, arrives in theaters and on Digital HD and Video on Demand, September 6th.