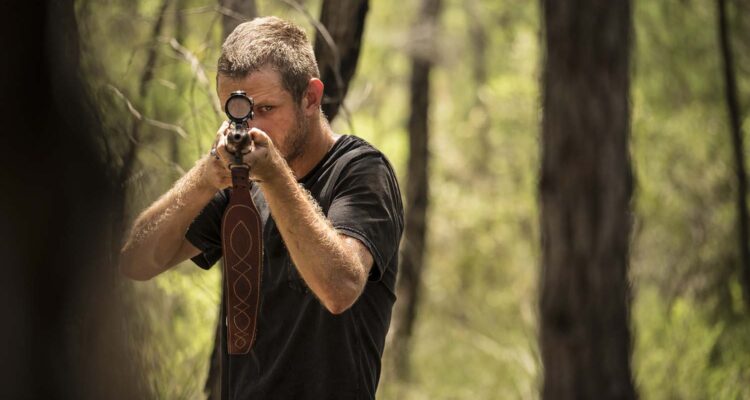 If the cold, the damp, the dirt, the bugs – and other assorted wildlife – didn’t keep you away from camping, never forget that you could become the unwitting victims of a pair of gun-toting rednecks. Deliverance taught us this lesson back in 1972, and now, Damien Power brings us a modern horror movie version of Aesop’s fable about staying out of the woods.

Killing Ground is an Australian production about a young couple who decide to take a camping trip to ring in the new year. Unfortunately for them, they are quickly dragged into a game of cat-and-mouse when they are beset upon by two murderous psychopaths.

If there is one word to encapsulate Killing Ground, it would be “bleak.” Thanks in part to its wilderness setting, a majority of the film’s shots consist mostly of empty space – when a character does appear in frame, the viewer’s gaze is drawn to them because of the stark emptiness around them. The hyper-detailed shots of nature that intercut the film, while technically beautiful, are purposefully undercut by the cold desaturation that infuses every image.

The story is not much warmer than the background: Killing Ground is a small feature on the cruelty that man can inflict on others. It does not downplay it; it does not justify it. It simply shows the brutality, senseless and horrid as it is and is supposed to be.

Still, this does not mean that the film doesn’t take some liberties on how it presents its violence. After building up its characters with the first third of the movie, the middle of the film takes on a Memento-esque mystery quality, running scenes from two separate timelines in semi-chronological order. Transitions between scenes at this point are nonexistent, which adds to the unsettling nature of what’s being shown.

Killing Ground is a film that takes its time and rewards the patience of those who stick with it. It lets its audience familiarize themselves with the characters, both victims and victimizers, before it throws the two against each other. It is a film cemented in gritty realism and plays to those fears that we harbor in the back of our minds, those itching “what ifs” that we can never seem to shake. Because no matter how well we guard ourselves with the logics of plausibility and probability, we can’t help but ask: What if it did happen to me?