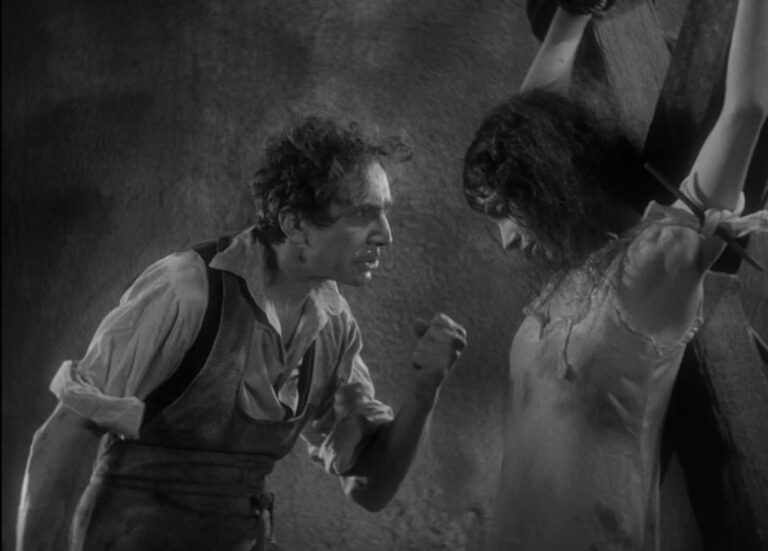 Screams of agony ring out from a woman bound to an X-shaped cross. She writhes in a fruitless struggle as Bela Lugosi’s mad scientist stabs a needle into her arm. But his experiment is failing.

“Rotten blood!” Lugosi shouts, smacking the microscope off his desk. “Your blood is rotten! Black as your sins! You cheated me! Your beauty was a lie!”

This key scene in 1932’s Murders in the Rue Morgue is provocative and horrific. It was designed to be provocative and horrific. Director Robert Florey’s subversive fever dream poked and prodded a Depression-era America about its anti-immigrant anxiety,  Fundamentalist struggles and repressed sexuality so effectively the film was banned in various cities across the country, and was just exactly the type of film that spurred the Hayes Code two years later. As a 90-year-old glimpse into the past, it is both charming and surprisingly dark and twisted fun.

In another scene, Lugosi’s Dr. Mirakle emerges from the shadows to visit his next intended victim. When his creepy overtures are flatly rejected, he returns to the shadows.

In this scene Florey demonstrates his expressionist film sensibilities, via Karl Freund’s cinematography. Filming Lugosi this way, dressed in black and constantly shrouded in shadows, frames him like an ominous force, more than a human. There’s a dreamlike quality to Lugosi’s scenes that make his appearances unnerving. Unusual camera angles and lighting paint an otherworldly and fantastical atmosphere.

And there’s something alluring about Lugosi. His thick Hungarian accent, and wild eyebrows and fright wig in his makeup. Even his scenery chewing. All of this raises the menace of Mirakle.

Rue Morgue hasn’t entirely aged well. The ‘exoticisation’ of minorities or treatment as monstrous is hard to ignore. Women are either sexualized and murdered because of their promiscuity, or they’re treated as weak and in constant need of a male savior. All that being said, this film works as an intriguing window into the early 1930s. The Great Depression was in full force. People were losing everything. Racial segregation and xenophobia were rampant. Nazis were beginning to seize control of economically devastated Germany, preaching the pseudoscientific virtues of eugenics that the American eugenics movement had been only recently pushing. Robert Florey, born in France and raised in Switzerland, had to have been aware of this.

Though it isn’t perfect, there’s a charm to Murders in the Rue Morgue. What it does well, it does very well. It is deliberately designed to get a reaction out of its American audience. Widespread outrage at the film’s content crippled it at the box office, yet Florey’s career continued steadily with more than 50 films. More Poe-based films were soon made as well, like The Raven and The Black Cat, which both starred Lugosi. Even the Hayes code, which heavily restricted what could and could not be done in film, didn’t harm Universal, as they continued to produce horror films that, while tamer, were wildly successful and often classics.

March is the 90th anniversary of Florey’s provocative fever dream. And it’s taken most of that time for the film’s critical reassessment from dud to notable (if not-quite-a classic) early horror film. It is a rethink that is long overdue.

“Murders in the Rue Morgue” is available for streaming on Amazon Prime Video, VUDU, Apple TV, YouTube and other services.