Alice Cooper’s HorrorBox: From Shock Rock To The Table Top 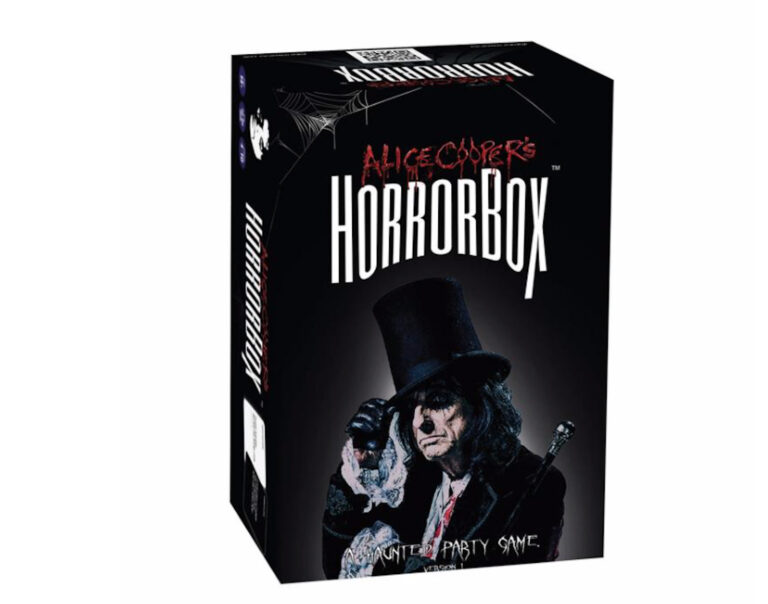 As the pandemic marks its first birthday, most people aren’t celebrating, still stuck at home, in uncertainty and frustration. that Fitz Games decided to fire up their creative ovens and cook up something to soothe the hunger pains of horror fans across the country, the Alice Cooper’s HorrorBox.

At-home horror experiences have seen a revival since the pandemic hit home. Fitz Games representative Angela Brasington and her team caught wind of this sudden boom, and decided it was their turn to step up to the plate.

“We launched our HorrorBox on October 26, 2020 to major success.” Brasington and her team further explained their decision to collaborate with famed rockstar Alice Cooper, “Alice Cooper has amazing fans, they love him, they love the things he puts out. He puts a lot of effort into the products he works with.” After being a trailblazer for shock rock in the 1970s, Alice Cooper teamed up with Fitz Games to head another market on the rise.

At-home horror experiences may be on the rise, but not all have seen the same levels of success. Brasington explains why the Alice Cooper’s HorrorBox stands on its own two feet, “While it’s the horror genre, it’s really funny at the same time.” Further describing the HorrorBox, Brasington continues,”So we’re really coming together to laugh over some of the things in the horror community.” According to Brasington, Cooper’s blend of comedy and horror tropes is what sets this table top game aside from the rest of the competition.

A bit of shock, a bit of laughter, and a bit of fright is what the Alice Cooper’s HorrorBox offers to fans of the shock rocker and to the horror community at large.

Halloween Every Night talked with Fitz Games’ Angela Brasington about the game and how they hope it will resonate with fans.

Halloween Every Night readers have an exclusive chance to win a free Alice Cooper’s HorrorBox. To enter for your chance to win, subscribe to our e-newsletter with the form located at the bottom right-hand side of the home page. The winner will be randomly selected on May 28.

No purchase necessary. Open to those 18 and over legally residing in the United States. Must be geographically able to claim prize, whether object or event. The giveaway is void where prohibited by law. By entering this content you understand that HalloweenEveryNight.com, anyone acting on behalf of HalloweenEveryNight.com, or its respective licensees, successors and assigns will have the right, where permitted by law, without any further notice, review or consent to print, publish, broadcast, distribute, and use, worldwide in any media now known or hereafter in perpetuity and throughout the World, your entry, including, without limitation, the entry and winner’s name, portrait, picture, voice, likeness, image or statements about the giveaway, and biographical information as news, publicity or information and for trade, advertising, public relations and promotional purposes without any further compensation. By entering you agree to release and hold harmless HalloweenEveryNight.com and its subsidiaries, affiliates, advertising and promotion agencies, partners, representatives, agents, successors, assigns, employees, officers and directors from any liability, illness, injury, death, loss, litigation, claim or damage that may occur, directly or indirectly, whether caused by negligence or not, from (i) such entrant’s participation in the giveaway and/or his/her acceptance, possession, use, or misuse of any prize or any portion thereof, (ii) technical failures of any kind, including but not limited to the malfunctioning of any computer, cable, network, hardware or software; (iii) the unavailability or inaccessibility of any transmissions or telephone or Internet service; (iv) unauthorized human intervention in any part of the entry process or the Promotion; (v) electronic or human error which may occur in the administration of the Promotion or the processing of entries. As a condition of participating in this giveaway, participant agrees that any and all disputes which cannot be resolved between the parties, and causes of action arising out of or connected with this giveaway, shall be resolved individually, without resort to any form of class action, exclusively before a court located in CA having jurisdiction. Further, in any such dispute, under no circumstances will participant be permitted to obtain awards for, and hereby waives all rights to claim punitive, incidental, or consequential damages, including reasonable attorneys’ fees, other than participant’s actual out-of-pocket expenses (i.e. costs associated with entering this giveaway), and participant further waives all rights to have damages multiplied or increased.