Legends Live On In ‘Sleepy Hollow’ At The Maverick 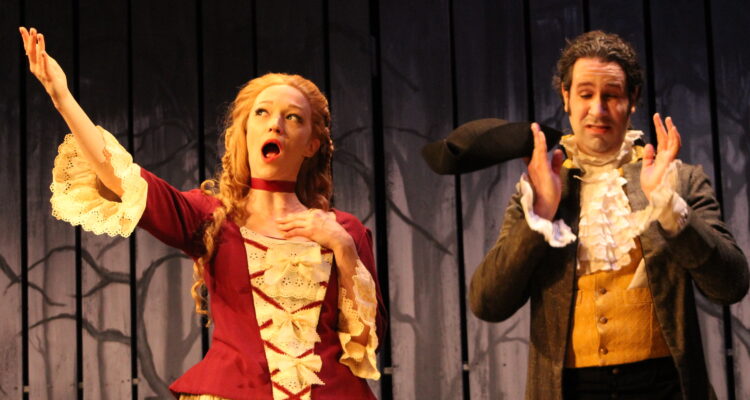 Kalinda Gray as Katrina and Kevin Garcia as Ichabod in the Maverick Theater's production of "The Legend of Sleepy Hollow," plays through Sept. 28. Photo by Jessica Peralta.

The Legend of Sleepy Hollow is still one of America’s greatest tales. Still spooky. Still funny. Still an evocative portrait of fall in a Northeastern village. And still fertile ground for stage adaptations.

The Maverick Theater’s production of Washington Irving’s classic short story is a hoot. Using John Heimbuch and Jon Ferguson’s adaptation, it’s a performance that never stops moving with a tongue-in-cheek delivery and a high energy level that seems to imply the cast is having fun.

The rest of the supporting cast (Patrick Peterson, Frank McCay, Stan Morrow, Kelsey Jimenez, Miranda Seighman and Ronan Walsh) flow energetically in multiple roles, creating much of the momentum and sense of whimsy, even despite the gloomy setting.

The adaptation is wrapped in the idea of ritual, myth-making and storytelling. These are, after all, how legends are made. Consequently, Sleepy Hollow (the village) shivers between those living in fear and superstition and those perpetuating it. There are multiple stories within the story, and visual elements reinforce the notion that humans tend to fill in the gaps of incomplete information with their own perspective, whim and agendas.

The first time we see Ichabod is through the slats in the high fence used as the production backdrop. A gray and foggy scene of barren trees eerily splayed across the front, Ichabod’s entrance as well as the headless horseman’s first appearance are mirrored through the use of the slats.

The horseman’s depiction — no spoilers here — is a clever symbol of how legend can be built on the shoulders of an agrarian society and how much it lives through them, all of which makes the legend quite potent indeed.

What happened to Ichabod is a matter of speculation. Some say … well, … you’ll have to find that out on your own. But it’s hard to top this tall tale.