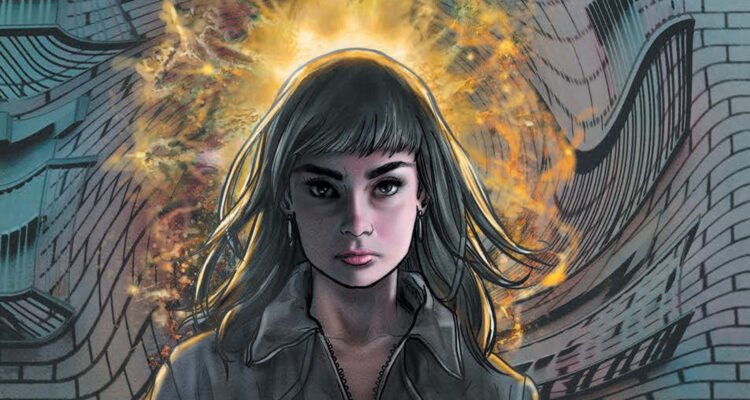 Raven is an ass-kicking veteran with PTSD and fighter of the supernatural in Kymera Press's "Gates of Midnight," the flagship comic of the all-women's comic publishing house.

The giant success of Gal Gadot’s Wonder Woman has knocked down barriers to female readers in the comics and graphic novel worlds. Male readers are accepting powerful female characters too.

But the walls are coming down for comic creators as well.

Kymera Press is an all-women’s publishing house in Los Angeles that is producing comics by women, about women and for actually everybody.

Debbie Lynn Smith, a former TV writer, is the company founder and writer of Kymera’s flagship comic, Gates of Midnight, and she talked with Halloween Every Night about her company, her comic and why Frankenstein’s monster can look like a movie star.

Tell me how the company started, and why did you decide to make Kymera an all-women’s publishing company?

I’d developed a television pilot (Gates of Midnight) with Barbara Hambly and had great responses to the pitch. But unfortunately, we were pitching it at the same time as the show Grimm. As the story often goes, Grimm got picked up and our pilot died. I revisited the pitch a few years later, restructured it and wrote a script. Then my agent, Maggie Field, suggested I turn it into a comic book.

I was intrigued with the idea so I started off on a mission to reintroduce myself to comics. I started reading independent comics. These comics had some real substance to the stories. The art was incredible. It wasn’t all just superheroes. I then started researching script-writing for comic books.

Meanwhile, Maggie and I started attending comic conventions and I was appalled at the fact there were so few women on the podiums. So when Maggie talked me into becoming her partner in a publishing company, I felt it was an opportunity to do something I loved doing and support women in comics.

Another reason I decided to publish comics myself is so I could control the content. I didn’t want to promote Gates as a comic that portrays women with real bodies and then have an ad with female characters that offends my audience. I was on a panel once where I mentioned this and another panelist told me he bought a comic for his 6-year-old and was appalled to find a masochistic-themed ad within the otherwise benign pages.

Gates of Midnight is fun. It’s got a certain familiarity, but some nice fresh things in it. The first thing I was curious about was why Raven is a veteran?

At the beginning of my television writing career, I was a writer’s assistant on a show called Tour of Duty. As part of that job, I also answered the fan mail. We got one letter from a Vietnam Vet that had a grenade pin in it. He said every night after dinner he would go to the garage and just hold that pin. He had pulled that pin from a grenade and was going to throw it but dropped it at his feet. The grenade was a dud. He said that he watched Tour with his family and it gave his family a way to get him to open up about his experience. He thanked us because he didn’t need the pin anymore.

Now, almost 30 years later, I still tear up when telling that story. So that’s where the idea to have a protagonist that has to deal with PTSD came from.

Then I stared reading articles and a book about female combat medics. The need to have female medics on combat patrol was so acute, the women did their Ranger training in half the time the as the male Rangers they went out with in Afghanistan. These women were the inspiration for Raven.

Something obvious are the illustrations. I like it, but I have to admit I’m not sure why. Maybe it’s something I completely missed, but the sepia-toned panels are only judiciously adorned with bits of color when the gem stones or monsters or blood are present. What was the goal of that?

I chose the sepia tones because I wanted to create a urban, gritty feel to the series. Our colorist, Miranda Rivera, was masterful in giving the tones depth and meaning. After Mirana left us, Sandra Molina joined us and brought a bit more color into the picture, while still respecting the sepia tones. I think we achieved my objective. Many people tell me they didn’t think they’d like the sepia tones, but changed their mind while reading the comic. I used the color to create a specific atmosphere… and so the color almost becomes a character itself.

Mary Shelley Presents is a really different thing as well. Frankenstein has been re-discovered as one of the greatest feminist works of literature, but you take a slight left turn and present The Old Nurse’s Tale by Shelley contemporary Elizabeth Gaskell, considered a kind of pre-feminist writer. It’s a cool and not well known ghost story. You also print the original text. What was the objective of the project?

I love Mary Shelley Presents, but Nancy Holder is obsessed! You wouldn’t believe how much research she does.She wants to know everything about the author of whatever story we’re adapting.

The original idea of adapting Victorian-era women horror writers was my once-partner, Maggie Fields. She made the argument that it would be cheaper because they were in the public domain.

Nancy and I wanted to do something for the 200th anniversary of the publication of Frankenstein, and we came up with the idea to use Mary Shelley and the monster like the Crypt Keeper, the narrator from the comic Tales from the Crypt. Like you said, she’s a feminist and melds well with the mission statement of Kymera Press.

The first four issues are stories with which everyone should be familiar but sadly, these women have faded into obscurity while their male counterparts are exalted. So I wanted to remind people that women have been writing horror successfully for a very long time. We also include the text of the story so people can get acquainted with these writers. My hope is that once we have the graphic novel, it will be picked up by schools and libraries. It’s a great way to introduce classic literature to reluctant learners.

What are the challenges of doing an adaptation like that and do you plan more?

We’re doing several adaptations now. Besides Gates of Midnight, which was based on my own pilot script, there’s Pet Noir, based on the novel of the same name by Pati Nagle, featuring Leon, a genetically engineered cat who’s an undercover cop on a space station. Ivory Ghosts, based on a novel by Caitlin O’Connor, is a murder mystery set in Namibia amidst the illegal ivory trade. And Dragons by the Yard is based on my own short story We’re planning on launching another one soon called Necessary Ill by Deb Taber.

The challenges come when the author wants to do their own adaptation. Comic book writing is a specific skill and if you don’t study it, you can’t do it. Most authors are successful in other fields that actually make them money, so studying the form is way down on the list. So, it’s a lot of work for me to work with them to get a script ready for production.

I noticed the brief appearance of Frankenstein’s monster bears a certain resemblance to Johnny Depp. Should we read anything into that?

Truthfully, I hadn’t even noticed. If it’s on purpose, it’s because Amelia is a fan. I gave her free rein on him. I just didn’t want Frankenstein drawn like the monster in all the old movies. I wanted him to look more real.