Horrible Imaginings Founder: Horror Saved Me And The Festival 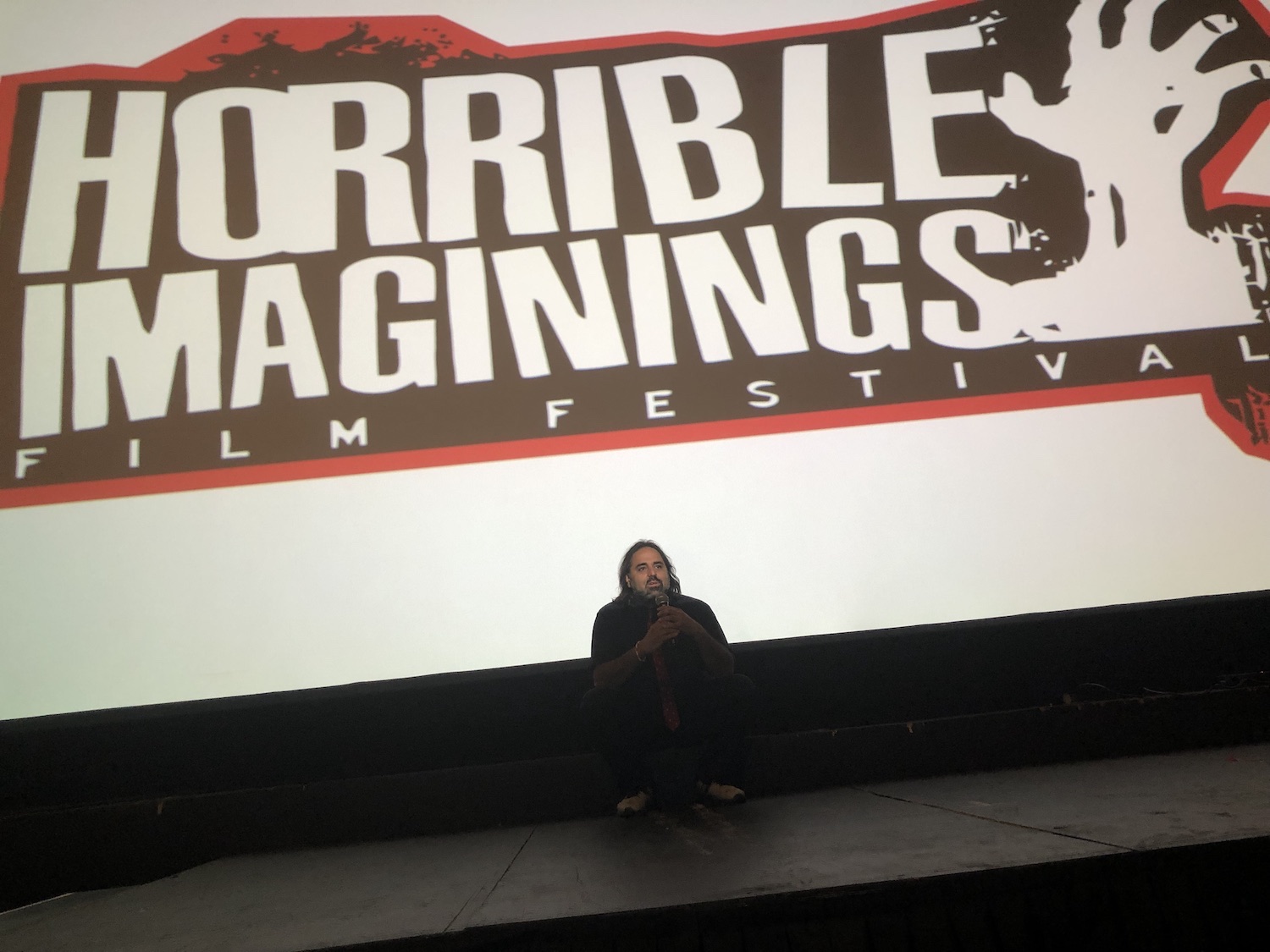 HIFF founder and director Miguel Rodriguez sits alone on the stage before introducing a film at the HIFF at the Frida Cinema in Santa Ana, Calif. The 2021 fest will be a hybrid online/in-person event. / Photo by Jessica Peralta

Horrible Imaginings Film Festival is back, bringing film lovers together for a communal deep-dive into our worst nightmares and burning desires. They’re swapping the pre-vaccine virtual platform of 2020’s festival for the more 2021-style hybrid platform.

Labor Day weekend, HIFF again offers their festival online, coinciding with their in-person return to The Frida Cinema in Santa Ana for four days of horror, sci-fi and fantasy films.

But surviving a pandemic has proven to be no small feat for film festivals, taxing its members as they find ways to pull through. For HIFF founder and executive director Miguel Rodriguez, horror has provided a sense of community and encouragement during these uncertain times.

“I believe horror can be used as a tool for building empathy and understanding among people, which is probably not what one would expect,” Rodriguez said. “I personally also don’t view horror as an escapist art, but rather as a confrontational art. I use it to face uncomfortable situations or emotions, rather than to escape from them.”

Rodriguez’s mindset toward horror has proved powerful, benefiting not only himself, but also the continuation of HIFF. Additionally, with a programming team spread across the US, Canada, France and the Netherlands, HIFF’s experience with communicating through an online platform  has — somewhat — prepared them for an online transition.

“The emotional and psychological toll that the year and a half has taken on me personally has been so acute that the drive has been more difficult to maintain than most years,” said Rodriguez. “In terms of number of submissions, we were hit pretty hard last year. The number was basically cut in half from the 2019 season. This year, that has bumped up quite a lot–though not quite back to where we were.”

As far as content of the film submissions go, many were naturally centered around the COVID lockdown — a theme that quickly became outdated.

“Films made during lockdown last summer had become nearly irrelevant less than a year later,” Rodriguez said. “On the other hand, there were a number of people who used lockdown to come up with some really interesting scenarios that explored the isolation we were all feeling, but without a lot of the specifics of coronavirus. It felt more universal and interesting that way. At least to me.”

Despite the setbacks of the past year, HIFF found support from artists, sponsors and film fanatics in June during their 24-Hour Virtual Fundraising Marathon Extravaganza — a choose-your-own-adventure style fundraiser filled with screenings, Q&A’s and interactive activities. This tightened HIFF as a team and provided Rodriguez with a renewed sense of motivation for this year’s hybrid festival.

“The biggest thing the fundraiser did was provide a seed to solidify our organization,” Rodriguez said. “I believe in collaboration over competition. This just helped fuel it for me.”

Experienced from last year’s completely virtual HIFF, Rodriguez stresses a virtual film festival is much more grueling than an in-person one. He also acknowledges that a hybrid festival is essentially two simultaneous festivals: virtual and in-person. Despite the doubled workload, Rodriguez is determined to make HIFF 2021 a festival to remember. Many of the film selections have already been added to the HIFF website and the festival will continue to have panels, parties, networking sessions and even live performances.

“I know that we plan on livestreaming our live performances and discussions to our virtual audience,” he assured. “That will then be recorded and made available later, as well. How this exactly will work out is something we are still tinkering with. We do have a number of panels and other networking events in the works.”

Other than working through the regular responsibilities involved in planning HIFF, Rodriguez has the rising Delta Variant on his mind. HIFF is requiring attendees to be vaccinated, as well as filmmakers. For those at risk or uncomfortable with in-person gatherings, the virtual platform continues to be a great option, something that, despite its challenges, Rodriguez may consider incorporating in the years to come.

“The virtual environment has a lot to offer that we weren’t taking advantage of before,” said Rodriguez. “Most notably, there is the increased accessibility — not just in terms of distance and time — but accessibility for people with disabilities or other challenges that make a cinema experience either difficult or impossible. This is pretty huge.”

Virtual and physical attendees have several ticket options for this year’s HIFF. In-person all-access passes are $140 for all four days, including access to the virtual edition of the festival. Virtual-only passes are available for $125. For horror fans looking to join the horde, the year-long Zombie Ranger VIP Membership includes an all-access pass to HIFF as well as year-round access to special screenings and events such as the new true crime and documentary spotlight, Horrible Realities. Each HIFF pass offers an installment option. Individual film screening tickets are also available. Tickets are now on sale at https://hifilmfest.com/tickets.