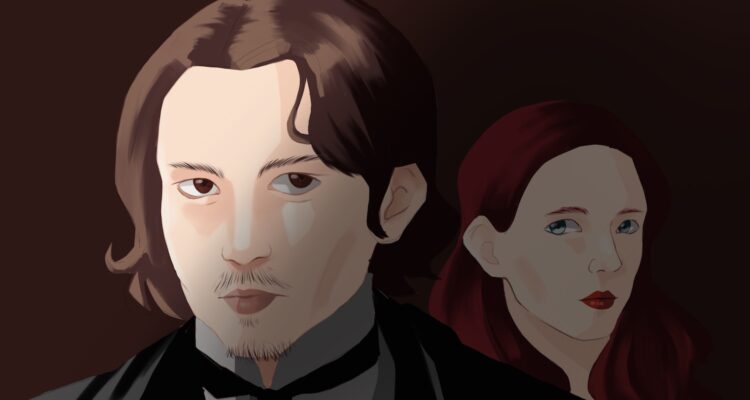 The Hughes Brothers' film version of "From Hell," based on Alan Moore's graphic novel, remains a visual thrill ride 20 years after its release. / Illustration by Carmen Hung.

A blood-curdling scream echoes down the grimy London streets of Whitechapel.

People surround a mutilated corpse, the woman’s intestines are strung around her shoulder, and whispers of Jack the Ripper can be heard all around.

In the blood and chaos of the early scenes of 2001’s From Hell, you’re introduced to the most infamous murders in history. One of the most financially successful feature films about the Ripper murders to date follows inspector Abberline, played by Johnny Depp, and gives the audience a first-hand look at the killings.

As you travel through each of the Ripper’s five known killings via Abberline’s detective work, directors the Hughes Brothers lay out a theory long espoused about the killer’s identity by some so-called ‘Ripperologists.’ They also lay out a vision of 1888 London as drowning in filth, corruption and desperation.

The audience, meanwhile, also sees the murders through the Ripper’s eyes himself, a trope used in classics such as Halloween and Psycho. Yet we are left in suspense because we are not given the full picture even as the narrative switches back to Abberline,

Alan Moore’s graphic novel on which the movie is based is far more explicit, yet the film still does an amazing job keeping modern horror fans invested, staying true to the gruesomeness of the original Ripper murders with realistic effects, while never feeling gratuitous. Despite a fictional story, strong performance by Depp, Heather Graham, Robbie Coltrane and Ian Holm, as well as great mood and atmosphere created by the Hughes Brothers and screenwriters Terry Hayes and Rafael Yglesias, the film remains a fun, dark adventure 20 years on.

The movie even pays homage to the original letter sent to police and allegedly written by the Ripper — signed “…From Hell.”

During the 1888 killings, Whitechapel and most of England was sent into a spiral of worry and mistrust. But the idea of an unknown killer looming around any corner also spoke to audiences in October 2001 when the film arrived in theaters. A little more than a month after 9/11, American audiences were looking for escapism from a national tragedy and for control in a time where control was not an option. Solving (fictionally) one of the greatest unsolved mysteries ever offered a great distraction.

As we approach the 20th anniversary of From Hell, Americans find themselves in a similar position with the Covid-19 pandemic. With this sudden, unknown threat attacking and killing people without remorse, it keeps the film relevant and tangible, even relatable to a new generation of viewers.