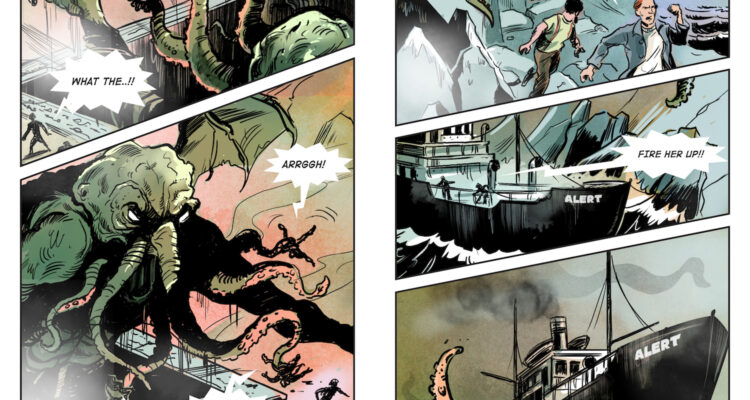 Don Quixote, Frankenstein and Robin Hood were discovered by a lot of baby boomers in comic book form first. Even in turning those brightly colored pages, a bridge was built between kids and classic literature, and a simple idea became a 30-year success.

Wringing new life out of sometimes centuries-old literature allows modern writers and artists to remind modern kids — and plenty of modern adults — that the classics have plenty of dark edges too.

Launched in the spring of 2018, Dark Tales’ first four books is an ambitious spread of Beauty and The Beast, The Snow Queen, The Hound of The Baskervilles and H.P. Lovecraft’s The Call of Cthulhu.

With such an opening quartet of titles, Printers Row Publishing Group Vice President and Publisher Peter Norton believes the novel-to-graphic-novel idea is still a good one.

“The graphic novel genre continues to grow and the comic illustration style is a fantastic way to appeal to reluctant readers of all ages,” Norton says.

And it’s OK to admit it’s also good business, too.

“The best-selling classics in our non-illustrated Canterbury leather and Word Cloud Classics series are fairytale based.  We recently added Lovecraft titles to both of those series and they are selling very well,” Norton says.

“The appeal of these classic tales have been proven over time and continue to endure due to the universal nature of the stories.  The graphic approach of Dark Tales will provide an introduction to many readers to H.P. Lovecraft and Conan Doyle.  The fairytale-based Dark Tales have modern twists that will make them more relevant for today’s readers.”

Norton says the titles were chosen because even though classic literature has wide appeal, the first four give the publishing house lots of options.

“The literary canon is rich with tales that appeal to various age ranges,” Norton says. “We launched Dark Tales with a diverse mix because we want to appeal to a diverse demographic.  The first four titles provide a large platform that allows us to move forward with more fairytale-based titles, or more Conan Doyle, H.P. Lovecraft titles. We want to be able to move the series in any direction going forward.”

Artist Dave Shephard did the illustrations for Baskervilles and Cthulu, and more than jumped at the opportunity.

“I’ve worked as an illustrator for many years and in the end, someone asked me if I fancied drawing a full graphic novel. I damn near bit their hand off,” he says.

Shephard struggled at first in finding a way to present Holmes, before following his instincts. Cthulu, on the other hand, allowed him complete creative freedom.

“It was terrifically difficult shaking the image of Sherlock as the wonderful Basil Rathbone, who to me, was the definitive Holmes. In the end I just had to go with it,” Shephard says.

“Call of the Cthulhu was awkward as it is an uncomfortable story,” he says. “That’s the feeling I often get from Lovecraft, unease and discomfort. I hope I managed to get a little of that across.

“In truth they’re both such wonderful stories that you could probably illustrate them a dozen times and still find something different every attempt. Lovecraft is so open, you could get a hundred artists to draw them and they’d look different,” Shephard says.

Dark Tales could have a very bright future with its wide demographic and classic storylines. The old Classics Illustrated comic ran from 1941 until 1971, but Dark Tales’ appeal to more modern tastes — even in classic literature — promises lots of titles the old comic never would have touched.

Shephard says he would love to illustrate a version of Hemingway’s The Old Man and the Sea, W.W.Jacobs’ supernatural tale Monkey’s Paw or Poe’s Pit and the Pendulum.

But he says choosing a favorite to illustrate is difficult because “there’s just far too many.”

“Poe, Wells, Verne would be obvious choices. I also foresee us pushing the envelope with less obvious choices such as Oscar Wilde’s Picture of Dorian Gray or Charlotte Perkins Gilman’s Yellow Wallpaper,” he says. ” The art will continue to be colorful and the tales will stay dark.”