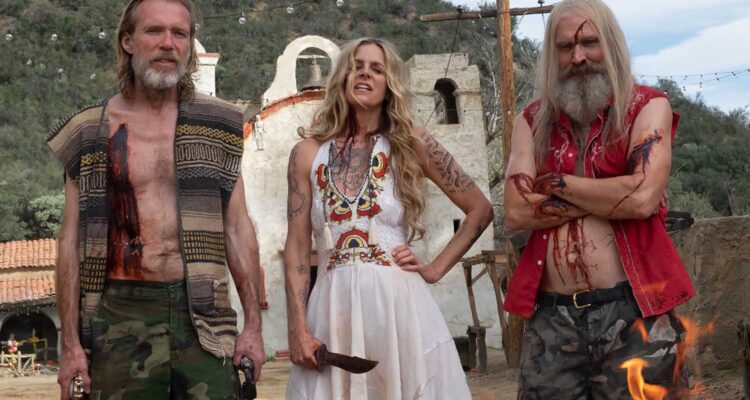 Every monster has his own sense of personal style — personality quirks, if you will.

Michael Myers is the strong, silent type peppered with elements of OCD (e.g. an unwavering desire to kill his sister).

Freddy Krueger … well, there’s a lot going on there, but sadist definitely springs to mind.

One notable standout to a long list of violent characters is Otis B. Driftwood. First seen in Rob Zombie’s 2003 slasher film House of 1000 Corpses and later in the 2005 sequel The Devil’s Rejects, the homicidal family man has made his return in this year’s 3 From Hell. It would be too easy to call Otis Driftwood a sadist, psychopath and maniac — though he might very well be all three. But he’s much more complex than that.

“Otis is very much a man of the moment — and there’s no conscience per se really to hold me back,” says actor Bill Moseley, who plays Otis in all three films. “If there were an animal spirit, I guess Otis would be a shark. Just gliding through, biting what he needs, you know, sometimes what he doesn’t need. Being very much a predator without a conscience, but at the same time, a family guy, not completely insane. Although considering the company I keep, I guess that’s hard to prove.”

Though Moseley has made a name for himself playing those with extremely high body counts, his own personality is much less homicidal in nature. In fact, he graduated with a bachelor’s degree in English from Yale University. After college, Moseley became a freelance writer for publications including Omni, National Lampoon, Rolling Stone, Interview and Psychology Today. At one point he even became editor-in-chief of CB Bible Magazine.

Not the background one would expect from someone adept at depicting torture and murder with glee. And certainly not the person viewers see when watching Otis in all his murderous glory, alongside his partner-in-crime (and possibly even more maniacal) Baby, played by Sheri Moon Zombie in all three films.

And yet, when Moseley talks about Otis Driftwood, it’s not with a sense of horror or disdain, but rather with something closer to admiration.

“It’s not like we have a big plan,” he says. “We don’t want to be CEO of a big company some day or have our paintings hang in the Louvre. We’re basically just, you know, day to day. And I love that about Otis. I think it’s very cool. I’m sure we’d all like to be that devil may care, and yet always present. Cunning. And a pretty fun-loving guy. Even though, his ideas of fun, I should say, are a little different than most of us.”

It’s this admiration — and trust — of Otis that most likely helps drive the character through the films. And you can see Otis’ evolution at each go. By the time we see him in 3 From Hell, it’s a more mature, maybe even wiser Otis. In fact, Baby is the one that may have lost more than a few marbles during her stint in prison. (Though we do love how she handles a bow and arrow.)

“I had some doubts and misgivings certainly as an actor. Like, ‘How am I gonna do him justice?’ But then got on the set, there’s Rob, I love working with Rob. There’s Sheri, there’s Sid, there’s Danny Trejo, there’s a lot of the familiar faces. … And it really did just kind of come trippingly off the tongue as they say in Shakespearean allusion. Yeah, just, uh, there was Otis,” Moseley says.

“I had a few false starts. I dropped a couple of lines, and then I just took a time-out, sat down, and I heard this voice say, ‘Bill, why don’t you sit this one out? I’ve got it.’ The voice of Otis, telling the insecure actor, just to get out of the way. Let Otis take over. And after that, everything went very smoothly.”

Despite all of Otis’ torturing and killing, he does care about one thing: his family. And that is still very clear in 3 From Hell. The first thing Otis does after escaping from prison himself is figure out how to get Baby out of prison.

“It’s interesting to me just as an actor to see how much Sheri Moon Zombie has grown as an actor. … I thought she did a fantastic job. I thought this was really her moment to shine and she did great,” says Moseley. “As Otis and Baby are I guess sister and brother — although that was never really clear certainly in the first two movies I would say. I’m personally still not clear. I think we call each other brother and sister, so maybe we are … but I think as such, Otis, there’s more of a respect for Baby in the movie, a growing respect. She’s not just the ditzy younger sister if you will. She’s really come into her own as a woman. That I think is also really cool about the script. We let each other grow.”

While the films have certainly developed a cult following, they are not everyone’s cup of tea. Even for hardcore-horror fans, they can represent an ethical dilemma: Who do we root for, the victims or the killers? We know the killers, but, well, they’re killers.

The latest film offers somewhat of a remedy to our guilt in the form of a homicidal group lovingly known as The Black Satans. When we see our killers come up against these killers, well it’s easy to form our alliances. And the fight scene between Otis and a member of The Black Satans is more than a little impressive, especially knowing that Moseley did perform his own stunts.

“We had a great stunt coordinator who also coordinated 31. … I worked with him. I would drive out from Los Angeles up to Chatsworth and go to the production facility on off-days,” says Moseley. “I would absolutely work with him on our machete choreography. ‘Cause it’s really important to do as much of that as I can. I’m pretty physical, so I was able to jump around and hit the dirt a couple of times. But also dealing with that big dude [laughs]. I wanted to make sure we had it down so that he didn’t actually just take some wild swing and you know chop my head off.

“It was actually great because my younger daughter, Marion Moseley, was on set that day, so I had a responsibility to stay alive because she’s still in college and dad’s gotta help foot the bill.”

He said he enjoyed having Otis have his moment.

“Otis is kind of quiet, not all the time, in the movie … but I think it was great,” he says. “I appreciated the opportunity for the character to really step forward and save the day, quote — unquote, at least in that regard. So that was kind of fun. It was fun being in that Mexican town. It was fun having those Wild West moments of walking in slowly toward the adversaries. A lot of real taste of Sergio Leone in some of that. That I also really appreciated.”

Though nervous at first about returning, Otis didn’t let him down.

“It was daunting at first just because Devil’s Rejects was one of the high water marks of my career,” he says. “And so trying to play Otis again, I was a little nervous. And I wanted to do the character justice and also move ahead really as Otis after years of incarceration. And just how Otis has weathered the storm, so to speak.”