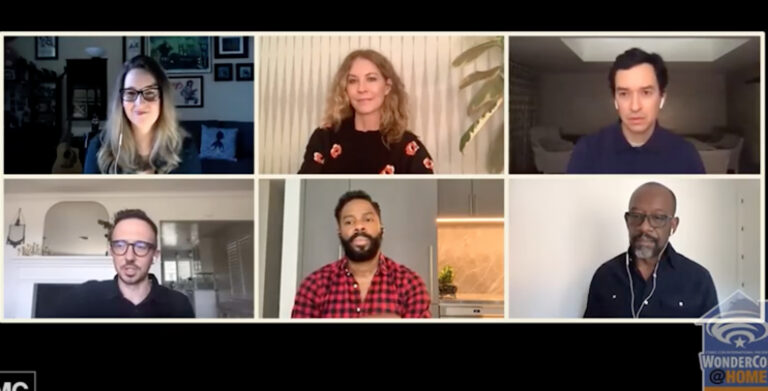 The 2021 Anaheim WonderCon wrapped up on Saturday, March 27 with a full day of panels reflecting the trevails and lessons learned over the last year.

Whether TV, novels or comic books, the artists involved expressed satisfaction and frustration in seeing their particular artforms to fruition.

Amazon Prime Video’s Them: An Exploration of the American Dream through the Lens of Terror

Executive producer Little Marvin said cast and crew of the upcoming Amazon Prime series Them “had this goal to create a show about the ‘50s that felt like it was shot in the ‘70s” with a bit of an homage to Hitchcock.

Marvin called the experience of making a thriller series about African-American characters “super cathartic”  because typically in Hollywood people of color “are never at the center of those frames. We’re the maid, we’re the housekeeper, we’re the driver, we’re the shoeshine boy. And so it was very emotional for me, I have to say. I would sit at the monitor and I would watch this black family, dark-skinned, beautiful, dazzling, occupying the center of these classic frames, and I would start crying.”

It wasn’t lost on any of the panelists that, in a way, the cast and crew left the set of a post-apocalyptic show in March 2020 and stepped into a world that felt like it was falling apart.

“To have the opportunity to go back and be in a creative space, and express ourselves creatively as artists was unbelievably therapeutic and valuable,” said actress Elfman.

Executive producers Andrew Chambliss and Ian Goldberg promised the end of season six will lead to a shake-up in the show’s formula and prime viewers for a very different season seven.

The second half of season six of Fear the Walking Dead premieres on April 11. — MW

Monsters We Have Met and Been

Writers David Brame and John Jennings, who write stories about racial trauma, took their weariness over a year filled with fear and anxiety and put it into their work.

“Monsters become in a way an avatar of these types of traumatic experiences whether its experiences within Africa or within the transatlantic slave trade or within the growing up as a young black person in the United States, so, the idea of monsters at least for us and in our context is our experiences and our trauma” Brame said.

Jennings added, “I’m utterly fascinated by the symbolic ideas, the reification of particular traumas and you know societal narratives, how they manifest themselves as monstrous.”

Manifestation of horror in the real world was something that Clay McLeod Chapman has been feeling and seeing the last year. For one of his works, he stated, “I wanted to kind of look at memory and look at denial and how we can kind of take an untruth and just kind of lacquer it up, layer upon layer until it becomes conviction.”

“There’s a certain kind of belief that you push it and you push it, and it explodes… and what comes out of an individual that’s been kind of tamping this anger or rage down. That to me is very monstrous and very horrifying,” Chapman said.

Brame brought up how atrocities are not just historical. They continue to be contemporary. For Jennings, the appeal of horror is “a way to give us different levels of language to deal with things that are really extremely difficult. You have to have a place of receptacle to put those things,” he said.

Recent news events have pushed Jennings to long for horror, which he believes is a “safe space,” ultimately saying, “sometimes you need the shadows to feel safe.” — MC

“I think the thing about Slow Death Zero and Slow Death is that there’s this deep fatalism, and this intense cynicism in it that’s imbued with some idealism” said editor Jon B. Cooke.

The fatalism is even reflected on the apocalyptic cover, a call back to cover artist William Stout’s similar cover for 1977’s Slow Death, a nod to Stout’s view of a lack of serious action on the issue.

Beaten to a Pulp: The Surprising New Audience for Crime Fiction

Behind closed doors, the industry that has been a staple in the comic industry has undergone some renovations. Crime comic writers and novelists Alex Segura, Alison Gaylin, and J.C. Vaughn met with moderator Ed Catto to discuss the fluctuating currents of the modern crime fiction industry.

The pandemic has posed hardships for writers of all kinds, including what the gathered authors described as “Zoom burnout,” and having to crowdfund novels to get them published. But things are not without hope.

“First couple of months this might not have been true, but people got bored and started reading again,” said J.C. Vaughn.

Alison Gaylin agreed, saying she’s found positive aspects of using digital media to market to a wider audience, “When you’re doing Zoom events, you can connect with people all over the world.” — AS