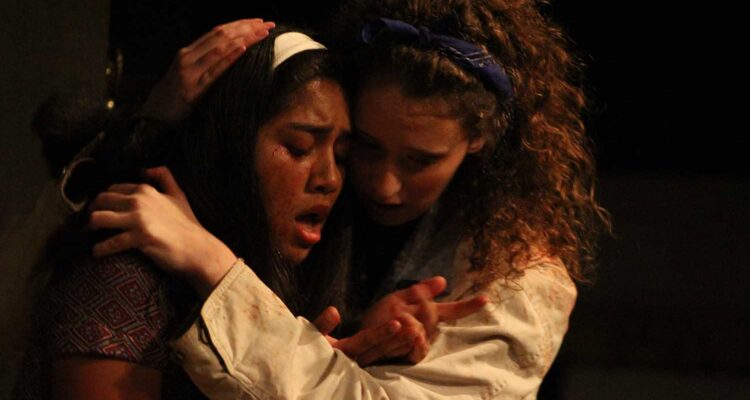 Angela Domingo as Barbara and Emma Frickert as Donna in Troy High School's 2019 production of "Night of the Living Dead" at Fullerton's Maverick Theater. Photo by Jessica Peralta.

Nervous teenage energy is in the air at the Maverick Theater on a cool November night.

Their clothes are torn and bloody. Their eyes opaque. They wait in the darkness.

A group of young actors with their lives very much ahead of them are about to jump headlong into a whole lot of death and mayhem for the next hour. Or in other words, the Troy High School theater department is performing Night of the Living Dead.

The same play, the same sets, the same stage and many of the same containers of theatrical blood will be used tonight by the students as used by those who perform the play every October at the Fullerton, California theater. It’s also being performed with the help of Maverick owner, Brian Newell — himself a Troy alumni — and members of the Maverick company.

The play, like George Romero’s classic film, is still a deliberately subversive us-versus-them parable of modern American society. In 1968, it was as much about race, militarism and the generation gap as the Maverick’s long-running production is about 21st century alienation, paranoia and — now coincidentally — the country’s current bitter political divide. Presented by high school students, it is undeniably subversive, but with fresh new twists.

This Southern California production follows on the heels of a New Jersey high school in March pulling off a live adaptation of Ridley Scott’s Alien to raves and much media attention.

While this production doesn’t have to mean everything, it certainly means something is changing in the culture.

“Storylines that contain hot button issues like homosexuality or religious or racial issues would be tougher to do now than in the 1970s or 1980s, but violence seems normalized in entertainment culture,” says theater teacher and Living Dead director Joe Hifferd.

“I think Americans see violence and guns as part of the expectation of entertainment. But issues that challenge political or religious beliefs are more protected in our current climate,” he says. “Just my humble opinion.”

Part of the envelope pushing in this production is because the main character of Ben, itself a shattering of long-standing African-American stereotypes in Hollywood, is switched in one of the two performing casts to a woman, named Donna.

Emma Frickert, a tall, 17-year-old Troy senior, provides Donna with pretty much all of the same action points any actor playing Ben has, but swaps a bit of muscle for obviously feminine touches that bring new context and powerful new symbolism in the #MeToo age.

“I do have a little bit of guilt about this, in that Ben was black and subverting a lot of racist stereotypes. It’s impressive [Romero] was able to do that,” says Frickert, aware of the twisting of themes and stereotypes busting at work. “I also know that it pretty much invented the zombie movie.”

Frickert has acted since age 6, doing lots of musicals, comedy and some drama. But horror offers a new challenge to her.

But while Frickert has the chance to break some barriers via horror, some things won’t be changing anytime soon.

“To get to be a role model and have the girl be the hero? I wish my little sister could see this,” she says.

The violence and dark subject matter inherent in the play, as well as the genre, continue to keep most of even the best of horror off limits for American high school drama programs, even if more controversial or provocative non-horror work has occasionally managed to appear in public school auditoriums. Horror is cordoned off as a mostly adults-only, taboo-like art form. That’s a problem for high school teachers desperate to find works their students can relate to and be inspired by.

“Our Troy administration has been more conservative leaning in the past. When we did The Laramie Project, it got huge backlash,” Frickert says. “This has been huge PR for us and they’re now looking at us differently.”

The success allows young actors like Frickert to plead their case for at least the prudent use of horror in high school theater.

“Horror is such a special genre, it can show us — when done right — what is wrong with our world,” she says. “I think of The Twilight Zone and Jordan Peele’s movies and think they’ve done a lot for our society. There is so much you can do and it has so much potential.”

Veteran theater critic Paul Hodgins of Voice of OC believes that while provocation is not new in high school theater, the subject matter definitely is.

“These kids are the children and grandchildren of hippies. Protest, shock and provocation are part of their DNA. And we’ve become desensitized to gore, shock, etc. because the Internet has opened the floodgates,” Hodgins says.

Though theater programs weren’t courting controversy in the past, Hodgins says the more adventurous high schools did occasionally give students a chance to push some boundaries, like Waiting for Godot, or Out at Sea “with its oh-so-daring hint of cannabilism.”

Hodgins also points to Orange County’s Corona Del Mar High School production of Rent in the ’90s that “attracted the ire of the infamous Westboro Baptist Church, who probably helped them sell even more tickets.”

And productions like this will continue to be an experiment in ever-changing public tastes.

“Some are not quite sold on the idea. I got the impression that it would work with two women in the lead. But it’s not all my work,” Frickert says. “It’s [Hifferd’s] too, and Angela Domingo, the girl who plays Barbara. I think it’s gonna be really cool to look back on my senior year and know that I did this.”