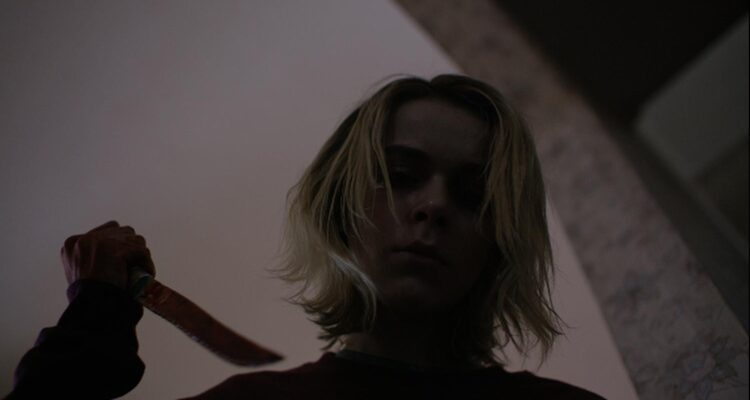 Kiernan Shipka / Credit: Photo by Petr Maur / Courtesy of A24

‘The Blackcoat’s Daughter’ Is a Horror Story Wrapped in Mystery

There are many horrifying elements, but not in the way we’re often programmed to expect them.

The film excels at defying expectations – both in storyline and characters.

Set in a prep school over winter break, the story follows two girls left alone at the isolated school. Parallel to this, there’s also a story related to a young woman who is heading to the school.

The film’s stories are expertly woven together in a way that pushes a strong sense of mystery but with enough forward movement to keep the viewer captivated.

And of course, there are plenty of scary things happening along the way.

Biddle says “it’s a delicate balance” between losing an audience to too much mystery and giving it all away.

From an audience member’s perspective, the filmmakers did a great job at walking that fine line.

Casting James Remar in one of the storylines helped up the mystery even more considering his talent for playing both villains and heroes equally effectively. (We won’t ruin the surprise for which side he plays in The Blackcoat’s Daughter.)

Another character in the film was the location itself – the boarding school.

“For us, that was kind of paramount,” says Biddle. “We would build the rest of our production if we could find our school.”

And they did at the University of Guelph in Canada.

The setting and the characters all work together fluidly to create a real sense of darkness that permeates the film.

“There’s an element of kind of dread,” Biddle says.

The Blackcoat’s Daughter is currently in theaters and on VOD. It hits Blu-ray and DVD on May 30.