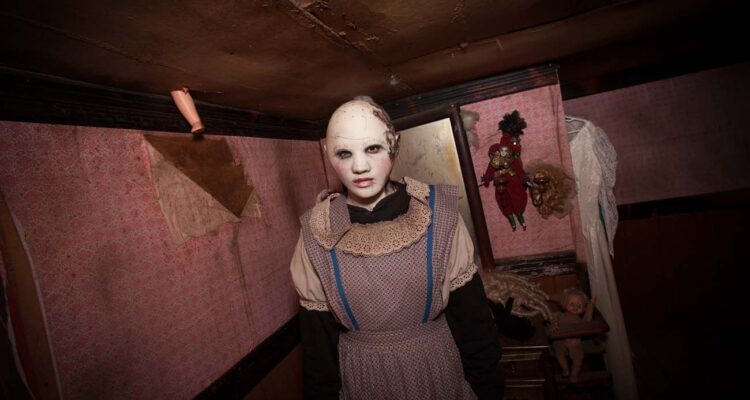 There is a dark side to haunted houses. While the traditional scare artist seeks to startle and entertain his guests with the classic trappings of Halloween, the extreme haunter aims to incite genuine fear through increasingly realistic methods. The line between entertainment and genuine threat is pulled ever thinner by their efforts as these extreme haunts seek to give you, the scare-aholic, exactly what you asked for.

We had the chance to speak with Roe and Zack Andrews, the writer and lead actor in the film, to ask them about how this cross-country haunt series got started.

“We grew up together in Plano, Texas,” said Andrews. “We always wanted to do a film together.”

“We were both living in LA, we’d already sold a couple scripts,” Roe elaborated. “There were some ideas, though, that were harder to get across to people without visuals. We wanted to do a movie that was scarier, that wasn’t supernatural. A horror movie gravitating to what human beings do to other human beings.”

In that regard, The Houses October Built 2 is less a follow-up to the success of the first film than it is a direct continuation on the original story. “We’ve always seen it as a two-part journey,” said Andrews. “The ending of part one may have been seen by some as abrupt, but we see it as more of an intermission.”

Three years of intermission waiting for the second half of a story may seem like a long time, but Roe and Andrews have used that time to make the second film even bigger, grander and more cinematic than the first. “We’re not just expanding the world of The Houses October Built,” said Roe. “We’re showing bigger places, we’re going all over the country. We’re expanding our filmmaking by shooting with drones, 360-degree cameras, VR technology. We’re really trying to push what we can do with this film.”

In making The Houses October Built series, Roe hopes that he can deliver the genuine haunt feel to the movie-going public, as well as give back to the haunts that make the film. “[These haunts] are families,” he said. “They’re very open-armed about letting us into their homes, showing us what they’ve imagined up. It’s insane just how creative they get every year.

“We wanted to put something on the screen that was as close to the haunt experience as possible,” he continued. “When we went in to film inside the haunts, the studio asked us to audition actors to stand in for the scare actors. But what sense does that make? These scare actor guys are actors too! They’ve developed names for their characters, ways their character speaks; they’ve been building and playing these characters for years – how could you get more real than that?”

It is actually in The Houses October Built 2 that we see just how real haunts can get, and it is Roe’s hope that he can deliver that feeling to the people at home. “There are these big, bad haunts out there, off the grid. Maybe with this film, we can give people a taste of what those haunts have to offer, without them having to go through it.”

The Houses October Built 2 opened in theaters and on digital and On Demand Sept. 22.