Ripper Anniversary: What To Read 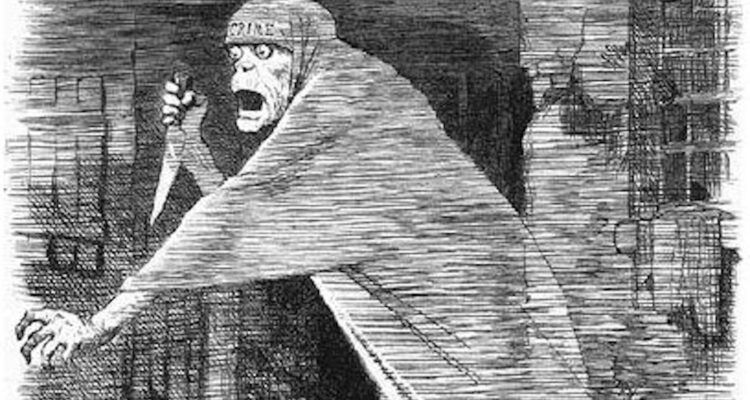 Since the days of this 1888 political cartoon slamming the English government for the conditions that spurred the murders, writers have been filling in the blanks in fiction and nonfiction books. Cartoon by John Tenniel.

The publishing world has always been the most fertile for Ripper-related works. Though flooded with bargain basement accountings of the murders and speculative works on the killer’s identity, there’s quality fiction and nonfiction to be had. Here’s some of the best.

From Hell  by Alan Moore and Eddie Campbell

The talents of Moore and Campbell come together to bring a new take on the murders of Whitechapel.  While London is on the verge of the New Year, the Ripper wreaks havoc on the streets, pushing the people of London into a modern age of terror.

Dust and Shadow: An Account of the of the Ripper Killings by Dr. J H Watson by Lyndsay Faye

Faye presents Dr. John Watson unearthing a new Sherlock Holmes tale: His attempt to catch Jack the Ripper.  Wounded in an attempt to capture the notorious killer, Holmes is stripped of his credibility and must go to any length in order to hunt down “The Knife” before it is too late.

Name of the Star by Maureen Johnson

Rory Deveaux arrives in London to start a new life, just as a string of murders are being committed.  They mimic that of Jack the Ripper and soon, Rippermania takes hold of London, leaving few leads and no witnesses, except for Rory.  She saw the killer, the only one who can see the killer, and now she’s his next target. Rory will learn the truth of the secret ghost police and her shocking abilities.

The Lodger by Marie Belloc-Lowndes

First published in 1914, this book is based off the Ripper murders  and is one of the first takes on the case, proving that after 25 years the memories of the murders still haunted the minds of many Londoners.

Carver Young is the only one who can see the similarities between the murders in New York City and those from over a century ago committed by Jack the Ripper.  As the killer runs loose, Carver is racing against the clock.

They All Love Jack: Busting the Ripper by Bruce Robinson

Robinson explores the why of the Whitechapel murders instead of the who, claiming the Ripper isn’t a man, but a manifestation of the Victorian Age’s bankruptcy and aversion to “look the other way” when a royal walked the dirtier streets of London.  Robinson dismisses many of the previous theories that Ripperologists have come up with, arguing the Ripper “was more than just a poor resident out of Whitechapel… he was a way of life.”

The Ripper’s final and most brutally murdered victim, was that of an Irishwoman Mary Jane Kelly.  Weston-Davies explores Kelly’s family lineage, claiming to be her great-nephew, and how her story is now forever immortalized with that of a serial killer.

Portrait of a Killer: Jack the Ripper – Case Closed by Patricia Cornwell

Cornwell, with the help of cutting edge technology and forensic science, has updated her book, providing new evidence it was a man named Sickert who was the killer.  By exploring his tragic life, Cornwell exposes human evil.

Edwards believes he has the evidence to bring us closer to finding out The Ripper’s identity, using allegedly previously unreleased evidence studied by forensic scientists.

Jack the Ripper: The Final Solution by Stephen Knight

Was Jack the Ripper three people?  Or was he a full-scale cover-up organized by the highest branch of government?  Knight explores the possibilities.