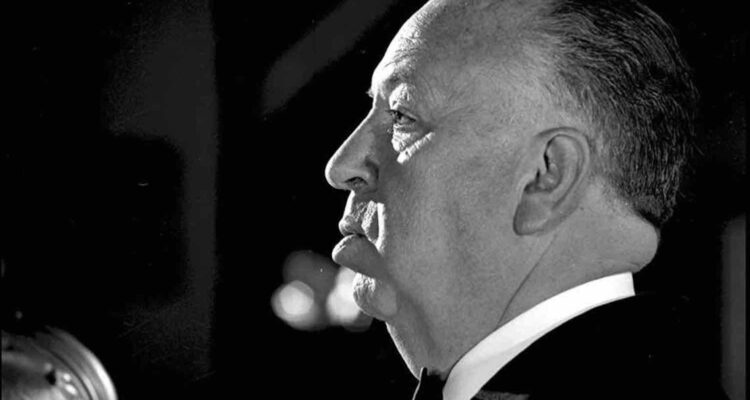 National Alfred Hitchcock Day is a day to celebrate the man who remains perhaps the most influential director in film history.

Thanks to a pandemic, it’s a lot easier to stay home right now and watch Hitchcock movies all day on National Alfred Hitchcock Day, March 12. There is a cinema master just at the touch of a remote while you “work from home.”

The most influential director in film history has been gone for 40 years, but much of his work is still inventive and fun — even its darkest moments.

That much was (practically) proven by our intrepid group of young writers who were largely unfamiliar with Hitchcock, aside from Psycho and The Birds, when they gave themselves a crash course on his films. Here’s what they thought.

“…Clearly the product of a Hollywood long left behind, however a joy to watch in the modern day. A harsh lesson about gaslighting, as the more people ignore the main character’s pleas, the worse the situation gets for everybody. Hitchcock’s look at the innate insensitivity and selfishness of humanity is one that begs to be devoured.”  — MW

“…Two rivals turned lovers, a train full of suspects, and a missing little old lady. Or is she? One of Hitchcock’s more lighthearted films. But don’t knock it. As we walk the train, we’re let into the passenger’s compartments discovering some scandalous and some ordinary side stories. Yet, we don’t learn about everything until Iris does, and that’s the magic.  And, hey, apparently Orson Welles saw the film 11 times, so as far as we know, he approves.” — MC

“…Quick-witted thriller about an inexplicable vanishing. Along the way, a young woman also finds herself a love interest with a dashing musician, making this one of Hitchcock’s more endearing films, full of adventure and charm.” —TV

“…The idea that a person would be willing to murder for money is one starkly based in reality. Combine this with the clever use of lighting and shadow and the result is a film that shouldn’t be missed by any Hitchcock devotee, let alone any horror fan.” — MW

“…  An eerie and suspenseful classic where a young Teresa Wright believes her uncle might be a killer. This film’s notable camera work makes it aesthetically significant and worth the watch. It is also said to be Hitchcock’s favorite.” — TV

“…Shows us the dangers of letting infatuation get the better of us. Joseph Cotton commands the screen as Uncle Charlie, whose charm is undercut by a sense of something sinister just below the surface. The unease manages to carry you through to the end, even after the truth is revealed a mere two-thirds of the way through.” — MW

“…A beautifully shot, good old fashioned story of a mysterious uncle under suspicion. An eerie experience set in beautiful Santa Rosa with a chilling ending that leaves you shaking your head. “ — CP

“… The film obviously exudes a strong anti-Nazi sentiment. However, after one washes up on their lifeboat the ragtag crew has to decide whether to throw him overboard, or if it’s their place to determine the fate of a single man. I was also pleasantly surprised at how the one black character, played by Canada Lee, is treated. While he isn’t given a lot of screen time, his treatment is refreshing. Overall, the nuanced approach to storytelling makes this film hard to look away from. “ — MW

“… Hitchcock again uses his attention to visual detail to create this enthralling film. It follows two people as they fall in love during a post-war espionage operation. Ingrid Bergman is the daughter of a German war criminal, is recruited by Cary Grant’s U.S. agent to infiltrate a Nazi organization. It soon becomes a dangerous and twisted love story you can’t turn away from.” —TV

“…A fascinating look inside the minds of two young men who murder another. One is shaken by the act and the other can’t stand to have the thrill end. However, it’s what Hitchcock does with the man they killed that’s really impressive.  All in all, it’s an anxiety-inducing joyride from start to finish.” — MW

“… What a chance meeting can do to someone’s life is crazy.  This one kicks into high gear in the third act, but the whole story is truly a ride. What makes this film such a delight is the emotion it makes you feel. I felt total frustration and hatred for the antagonist. You will be irritated. And glad you watched it.” — MC

“… Despite a few logical leaps, the film is successful in incrementally ratcheting up the tension, culminating in a harrowing race against the clock before the film’s ultimately satisfying conclusion.” — MW

“…A love triangle turned murderous provides us with a captivating story. A London apartment inevitably becomes the crime scene. So, that means the audience would be able to inspect the small space and figure out a solution for poor Grace Kelly, right? Well, it sure passed me when I first watched it.  This is Hitchcock’s only 3D film, and according to Martin Scorcese, this is what makes the payoff at the end even greater. If you can get your hands on the 3D Blu-Ray, I suggest you do.” — MC

“… In an attempt to have his cheating wife killed, ex-tennis pro, Tony Wendice, played by Ray Milland, blackmails an old classmate into doing the job. When it goes wrong, this suburban thriller unravels. Wendice is left to clean us his mess to save himself from being discovered as the mastermind behind the carefully orchestrated attempted murder of his wife, Margot Wendice, played the gorgeous Grace Kelly. This Hitchcock film is a nail-biter to the very end.” — TV

“…Morbidly funny is the only way to describe it.  A man mysteriously winds up dead but it doesn’t play out as a classic who-dun-it. This is definitely one of Hitchcock’s most ludicrous films in the best way possible.” — MW

“… A culmination of a lot of what makes his work so iconic. Cary Grant plays a man framed for murder on a cross-country dash to evade police and harm. What it lacks in the contrast and shadow of his black and white films, it makes up for in excellent cinematography and some unforgettable scenes. No doubt, when the greatest films ever made are being discussed, this movie should be included in the conversation.” — MW

“… Arguably one of Hitchcock’s most beloved films. A tale of mistaken identity leaves a man in a nightmare scenario. Yet another visually iconic and notable film that grips the viewer with its flawless cinematography.” — TV

“…’A boy’s best friend is his mother.’ I don’t think I’ve ever heard anything so cringey and eerie at the same time. There is so much duality in this film. Janet Leigh’s Marion Crane is astute but naive. Anthony Perkins’ Norman Bates is both charming and creepy.  The ending is beyond anything I imagined and one of the most extraordinary cinematic twists I have seen. Many of us know about the famous shower scene. It stands on its own, but it is so immersive and terrifying within the film, especially paired with Bernard Herrmann’s score. It’s incredible what Hitchcock did with a television crew and cast, and like any great artist, he doubted his work, but it turned out to be a masterpiece.” — MC

“… Hitchcock’s most undeniably memorable film, it’s an intense and violent pinnacle of what a thriller movie should be. Anthony Perkins leaves a lasting impression to never trust even the most seemingly innocent and polite men.” — TV

“… Skillfully take a less than harmful subject and twists it into the stuff of nightmares. Those flying critters are out for blood, and nobody really knows why, which is by design. Not knowing the ‘why’ of the situation makes it that much more eerie and creates a situation where just one shot of a flock of birds is enough to make you clench your teeth.” — MW

“… I know it sounds silly, but this film was so ambitious and successful in its visual effects, it still holds up today. The man-versus-nature theme is incredibly evident here. Are we deserving of a bird invasion after running many of them into extinction, using them for our fashion, hunting them for sport, and genetically modifying them for our consumption? Furthermore, Hitchcock creates a horrifying viewing experience through unique sound effects, the strange composition of distorted bird screeches and thumps. The film manages to leave you afraid of the beady-eyed, feathered creatures.” — MC

“… You’ll be scared of birds for weeks. Birds attack women, men, and even poor school children.  A classic that will be known for decades.” — CP

“… A much more visceral depiction of violence and nudity for Hitchcock. What’s more, Jon Finch delivers an astounding performance as the unlikable, yet unmistakably human protagonist. This is a much grittier take on the familiar theme of misunderstandings that Hitchcock is so fond of, as well as one of the most entertaining.” — MW

“… Finch continues to be in the wrong place at the wrong time and losing women left and right. The guy never gets a break and even finds himself in prison for murders he never committed. Ah!” — CP