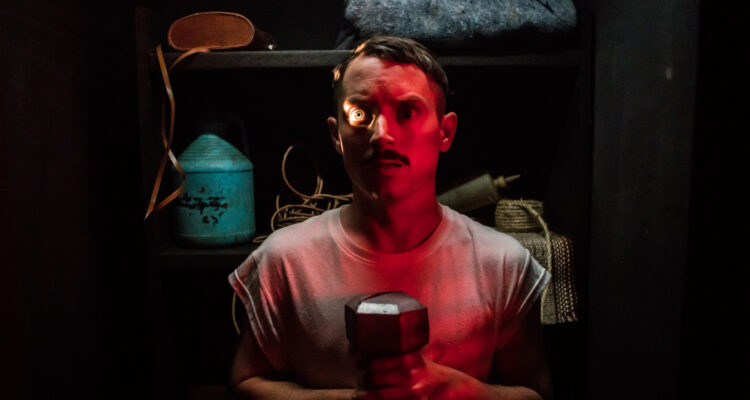 “In front of me,” he says, “which was very traumatic.”

The trauma inspired Timpson’s new film Come to Daddy, an examination of unresolved father and son issues, and how your old man might have a few things about him you didn’t know. Things which, rather importantly, might torture and kill you.

The darkly comic thriller stars Elijah Wood, as a man meeting the father he never knew, and features a quality supporting cast of Stephen McHattie, Martin Donovan and Michael Smiley who catapult him into a situation where morals ultimately matter less than bonding.

How far would we go to please our fathers? It’s a good question.

“The whole premise of the film was just to make something that is a tribute to my dad,” Timpson says. “But I wanted to use the moment in time when he died, which had a really weird thing.”

The New Zealander acknowledges the father-and-son theme as “such a rich vein to mine.” With films like The Great Santini and This Boy’s Life as personal favorites, he set out to tell a story that was personal, yet almost entirely fiction.

“I don’t know why I like the really dark father-and-son films,” he says, “because I had a great relationship with my father.”

When his dad died suddenly, he was given an unusual opportunity, thanks to a friend at the local coroner’s office.

“I ended up spending a week with his corpse. I spent a lot of time alone with him in the house,” he says.  “I thought, what you do is, you go get a long of things off your chest, because we’ve all got these questions about our parents once they go. But you get down there and you look at this stone cold corpse, and it really freaks you out.”

Then, Timpson met all the people who had come to pay their last respects.

“They had wonderful stories from a different sort of era. He was really a different character than I thought I knew,” he says. “My mind started to play with the idea of parental histories we’re not really sure about. I wanted to make something with gallows humor that my dad would love, and that’s where it took off.

In the film, not much is known about Wood’s character, Norval. It’s mostly implied. But growing up fatherless in Beverly Hills, he’s become something of a liar and poser. Nevertheless, he’s the grounded one the entire movie spins around. From his odd bowl haircut and mustache to ill-chosen clothing, he’s clearly a fish out of water here, and likely a fish out of water pretty much anywhere.

“It was on the page,” Wood says about his character’s “douchbagy” look and qualities, and jokes “When I first got the script, it was sent with an image of Skrillex.”

But the balance of character idiosyncrasies and flaws — laid out by screenwriter Toby Harvard — is delicate in such an immorality tale.

“It works because of the way Elijah plays it,” Timpson says. “Yeah, he’s slightly douchey, but has the human qualities that every one can relate to. If the other characters are more wild and he’s not grounded, it’s gonna be this tone deaf thing. He pulls off a really smart performance. It’s not a game of one-upmanship when he’s on screen. He doesn’t need to be any bigger.”

Wood’s oddball is pitted against a rogue’s gallery of characters, which Timpson says were inspired by 1970s thrillers. And because the group of actors is so strong, they “just pop when they come on. The film just gets re-energized when you see them.”

Timpson describes McHattie as a slightly eccentric and intimidating actor, and man of few words. He tells the story of his first meeting with McHattie, spending “what felt like five hours but what was actually about 20 minutes” pitching the film to the silent, stone-faced actor, before McHattie simply replied ‘I’ve already signed on.’

“Casting is such an unusual process,” Timpson cheerfully says. “When it works, it’s just alchemy. I think it’s rare when it clicks across the board. We were one of the lucky ones.”

“I was lucky that Elijah came on board right away,” he says. “It’s lot easier to get traction, otherwise you have to be waiving a decent sized check around.”

Timpson, a long-time producer, is getting critical buzz for his directing debut and seems a bit surprised how it’s all come together. Especially because of his dad.

“I’m really happy that it worked out,” he laughs, “because it would be horrible to say you made something for your father and it’s a piece of shit. I feel like we pulled off something really special.”